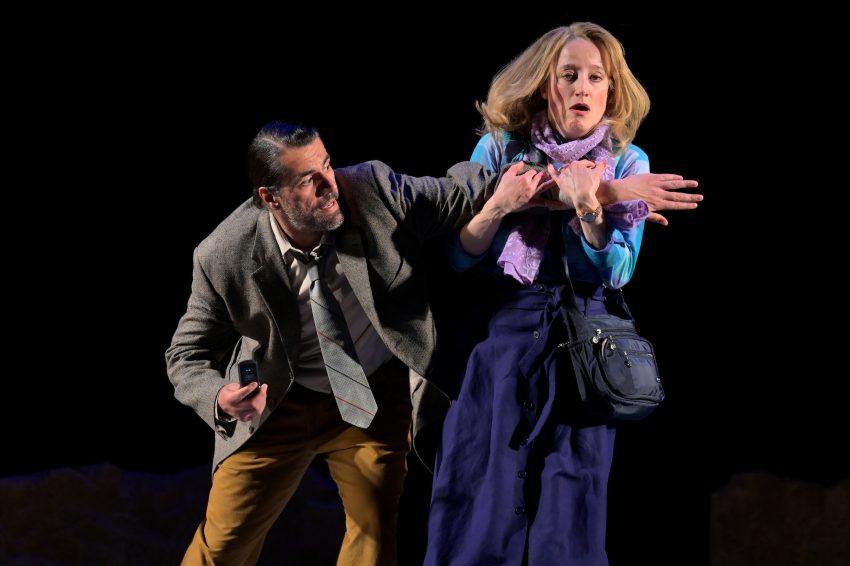 In a swank hotel in Cairo, a wealthy, anxious older couple from Wisconsin has hired a young Egyptian couple as their tour guides. “Hotter than Egypt” clips along at a witty pace as two couples try to figure each other out. Oh, and there’s a revolution going on outside in Cairo’s main square.

Designer Carey Wong sets the comic tone with a ridiculously tall and clearly fake palm tree. The vast luxury suite and the tour boat on the Nile make rich fun of tourists in Egypt. When they visit the museum, a giant sphinx head descends as if commenting on the farcical actions below. The sphinx’s stony look fits perfectly with the political timebomb of “Hotter Than Egypt.”

The reluctant young tour guide Seif (hilarious Wasim No’mani) resents the tourists and is focused on Egypt. A revolutionary at heart, he identifies with the protesters. In Yussef El Guindi’s play, political uprising resonates with the women’s rebellions.

Trapped in the violent uprising, U.S. wife Jean (intriguing Jen Taylor)  insists on finding refuge in Seif’s small room. The play exposes their needs and doubts. It’s not easy being a rich tourist, but it’s harder still for the destitute Egyptian couple to resist the seductive call to riches and escape.

For their 24th anniversary, Paul (probing Paul Morgan Stetler) takes his wife with him on a business trip to Egypt. But Paul has a hidden agenda. He starts by criticizing Jean for wearing skimpy clothes in the hotel. Unconsciously, the American husband gives away his his brittle personality and selfish schemes.

Paul proves that he is both a clueless western tourist and a hopeless misogynist. He’s used to having his way, starting with his wife. He throws his weight around while pretending to be humble. But the younger Egyptian couple MUST guide and PLEASE the tourists, kowtowing to the Americans’ every whim.

On the Egyptian side, more practical conflicts arise. Maha (astute Naseem Etemad) questions her fiancé’s ability to support her. She feels trapped by her poverty in Egypt and looks to Paul, the American, who offers a gold ring to escape. Maha throws the offer in her fiancé’s face in an intense and gripping scene.

As her fiancé, reluctant tour guide Seif, No’mani reveals the timing of a master comedian.  Whether he’s placating Maha or manipulating Paul and Jean, No’mani could convince us of anything. Seif will make a master politician if the revolt succeeds. He delivers masterful monologues with wit and charm, seducing us with his charisma.

Who will resist and who will rebel? “Hotter than Egypt” does a great job making comedy out of the inequality that afflicts the elite and the needy. Intertwining the two makes this a comic feast you don’t want to miss.