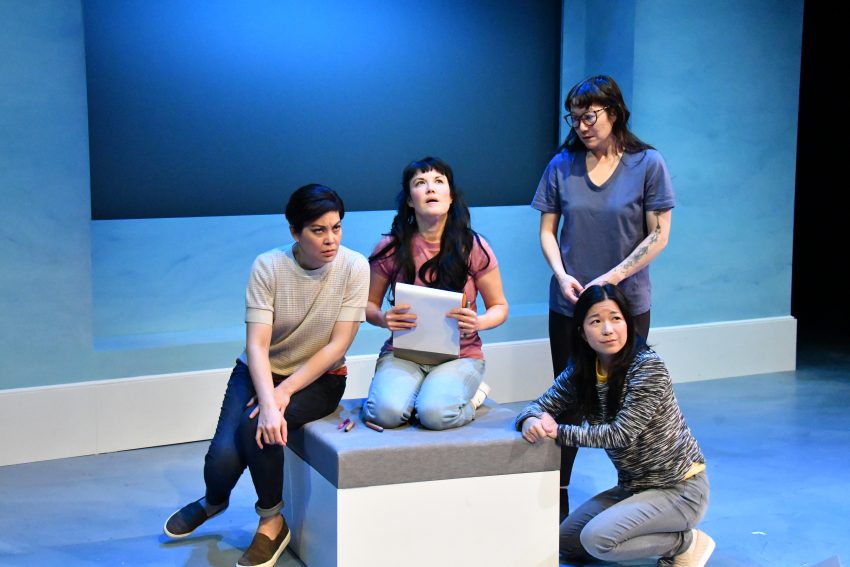 On a small stage with four ottomans, used as seats and storage, Playwright Sam Chanse reminds us of our need for connections to people and nature. A huge video screen of a peaceful underwater ocean with swaying colorful coral reefs greets us.

In the introduction, four children, Lina, Constance, Amy, and Mac, act out a hero’s play, fearful of awakening their abusive father.

Chanse creates two separate worlds for us to piece together. In the real world, three sisters feel the absence of their eldest sister Lina (steadfast Lisa Hori-Garcia) who is ignoring them. They reminisce about ways to reconnect with her.

We learn about them as they are relearning about each other. At the same time, they struggle to persevere in their individual dysfunctional worlds. The three sisters fall into introspection, taking turns questioning their relationships, and talking to the audience.

As coral reefs wither away, obsessed Amy (demure Erin Mei-Ling Stuart), a marine biologist, instructs us with a long tutorial. Due to rising ocean temperatures, these beautiful ocean monuments are bleaching and dying. Natural wonders are being drained from the earth, like loved ones leaving us.

Three playful sloths burst forth from the screen, from a background of bright orange and yellow, jolting and delighting us. The three sloths: Julio, Cesar, and Miguel are male caricatures of Constance, Amy, and Mac. We wonder how sloths bridge with the sisters.

Then, in a spectacularly staged desert fantasy, by Scenic Designer Mikiko Uesugi, they meet their wonder sloth sister, Magdelena (from the Hebrew word for “tower”). She uses her technical prowess to find a buried bomb, solving problems through science.

Socially conscious Constance (multi-talented Rinabeth Apostol) takes on causes, and as Julio, fights to save an impoverished orphanage. As the only mixed-race female writer on a children’s TV show, she fights for female heroes. Apostol shines in her ability to slip from a staid, socially aware woman to a raving sloth child, then to a crumbling monument.

Each thread in the play brings its own important message as the sisters try to bond. Yet Chanse’s play wanders and becomes confusing at points. We wonder where the characters are in space and time, when they break their scenes to speak to the outer world.

Fast-talking Mac (vibrant Sango Tajima), left a job she loved, refusing to explain. She also needs to fuse with the audience but won’t allow herself: “I get why I’m having a hard time connecting to you. There’s a lot of STUFF in the way…” Yet Tajima links wholeheartedly to Miguel, her male sloth.

An air of sadness hovers over the sisters, broken by their search for a treasure.

Director Giovanna Sardelli enhances the roles of the talented actors, while keeping the many distinct parts quickly paced. She uses a mix of cultures to emphasize the pressing environmental issues.

I enjoyed “Monument” because it reminds us to look at what is dying around us, at our connections to Nature, to each other, and ourselves.