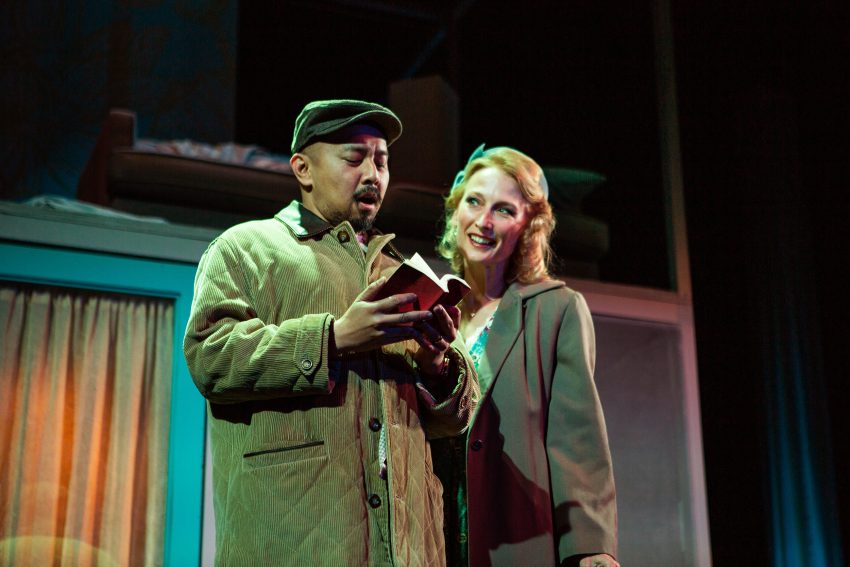 Jomar Tagatac plays Harry Chin with subtle and moving emotion, turning simple moments into stage gems. Harry emerges as a Chinese American who has learned too well the immigrants’ lessons of concealment, silence, and guilt—even though he obediently follows U.S. immigration rules.

Following the rules does not pay off for Harry—he spins himself into a cocoon of work and love and fatherhood, but he never shares himself, his feelings, or his worries with his delightful wife Laura (irrepressible, luminous Carrie Paff) or his daughter Shiela (bright, thoughtful Kina Kantor).

When Harry dares to speak the truth, he gets it out with difficulty:

HARRY:
America is
lonely.
Yes.
Is hard.
Is ugly.
Is angry.
Is scary.

Harry Chin, beautifully realized by Tagatac, needs attention, but he cannot speak up for himself. We feel he never had a chance. Like Willy Loman in “Death of a Salesman,” Huang’s Harry Chin takes us into the heart of an abandoned U.S. Everyman.

The brutal induction process for Asian immigrants is exposed in nightmare scenes with monstrous U.S. officials, played forcefully by Will Dao and Michael Torres. With flag masks and cruel questions, they embody the abuse of Harry Chin and so many others in his shoes, treating Asian immigrants with disdain.

Inside and around the impressive, rotating, two-story cubicle set, Tagatac subtly shows us how immigrant status wears away at emotions and expectations. Fighting with his ghosts and invoking comical charms, Harry argues with the spirits:

HARRY:
Okay then.
Okay then crazy ghosts.
You happy now? You take Job, you take Sheila!
Well you don’t know what hits you.
You think you bother Harry. You think you scare me?
You should be scare!

One man comes to the U.S. years ago and follows all the laws, but the U.S. deprives him of his name, his family, and his dignity.  How can such a man cope with living lies for the rest of his life? And yet the U.S requires these lies of him.

Huang poses the question by sliding back and forth through time, from magical dreams to harsh reality. But we wish we knew more details about these folks, to give their suffering more depth.

Tagatac’s Harry becomes a cauldron of feelings that he can never openly express. Sharon Shao does an elegant job playing both Harry’s long lost wife from China and his abandoned daughter Susan. The wife is another charming ghost while the daughter is delightfully real, seeking out her long-lost dad.

Huang has given her hero a voice that speaks for immigrants. She paints vivid pictures of hopes dashed and possibly recovered. It’s a journey we all make with Harry Chin, no matter our origins.