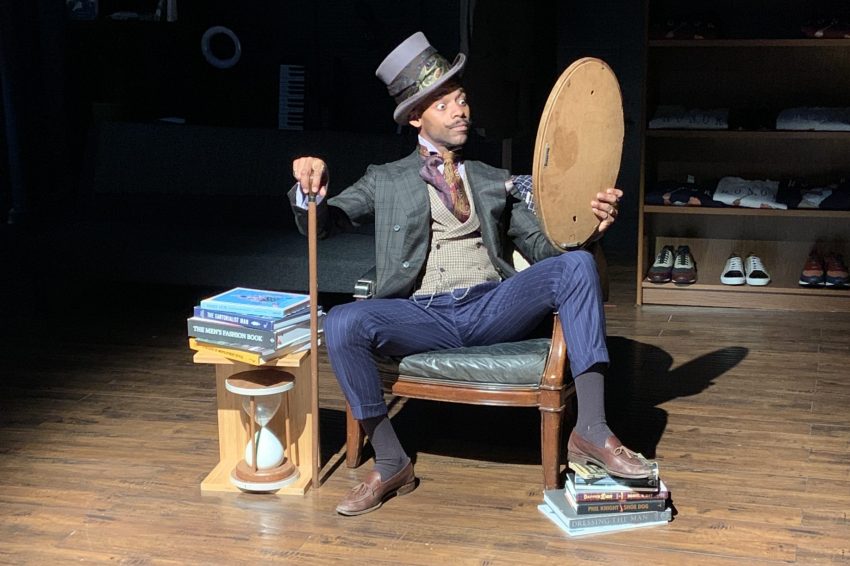 The handsome young man, with elegant curled mustache, welcomes us to his dressing room with an irresistible smile.

Michael Wayne Turner III, award-winning poet, has transformed himself—onstage and off—into a powerful character from Alice in Wonderland. The mesmerizing young man has become The Mad Hatter and he’s throwing a charming Tea Party for us at Oakland Theater Project, titled “Hat Matters: Thoughts of a Black Mad Hatter.”

Turner’s show is funny and hopeful, unique and inspiring–he’s an accomplished performer.

When we’re settled down with tea and treats, Turner’s self-fashioned hero begins to blossom. As he muses over his racks of clothes, we admire the array of checkered suits, colorful shirts, breezy hats, and magnificent cravats.

His rapid hip/hop beat holds us in his bountiful presence, launching powerful feelings. He rebels against conventional assumptions about being young or Black or male.

An avowed dandy, he raps enigmatically about his journey to style—how he forges an identity from clothes, breaking the conventional mold. As motivations spill out, the lithe, lyrical young man storms social barriers, teaching us to see his role in the world anew. Bravo MWT!

Actually, we would like to know more about his story and his struggle: How did he come to recreate himself so fresh? His poetry both reveals and conceals mysteries of the Mad Hatter.

It’s hard to take your eyes off him as he engages with the mirror—a model man. Beginning with “I’m on the lonely road,” his personality emerges like a newly-fledged butterfly:

I know ya see me a black man

but what do ya think?

What do you see?

What is a black man supposed to look like anyway?

take me for example

I’ve styled myself as a sunset

ever consist never the same

ever romantic but never ashamed

Turner’s style destroys knee-jerk racial stereotypes, concocting an antidote to ingrained prejudices. We want to learn more of his story, what is hiding behind that dark word “supposed”?  I, too, would love to say: “I’ve styled myself as a sunset.”

As we follow his ups and downs, his poetry erupts into magnificent rants and reversals. He is paving a road to a better future with more conscious choices.

Even when he changes his shirt, he is confident and graceful. His hats proclaim elegance, his cravats shout with explosive energy. Turner has invented the Black Dandy—a new and sensitive superhero.

In one sweet, swift hour, Turner bravely exposes his struggle to assert himself, as a young Black man and artist, in a world trained to shun or fear him. His thoughts take us from an America sick with health un-care, police murders, and prison apartheid to an imagined future where every person can thrive:

Here Premature death here is a genetic disease: eating at our hearts,

And i am sick.

and tired of dying.

in public, with strangers,

i am sick and tired of dying

Blame me for being so hopeful,

but i still believe no plant is ever too wilted for the grace of water.

How can we expect an untended garden to grow?

Turner is a beautiful and introspective performer who is not afraid to explore his identity in public, even wearing his suits on the streets. He challenges those who would challenge him.

MWT wears checkered vests, silk shirts, and tweedy jackets—looking smashing in them. “Hat Matter” is worth a second trip! Here is a great new artist starting an inspiring voyage. Hear him, enjoy his style:

May a queer love find you; let it be different and unique, special in specifics to you.

May you live long enough to give it a chance.

Perchance you find yourself and someone to love it.