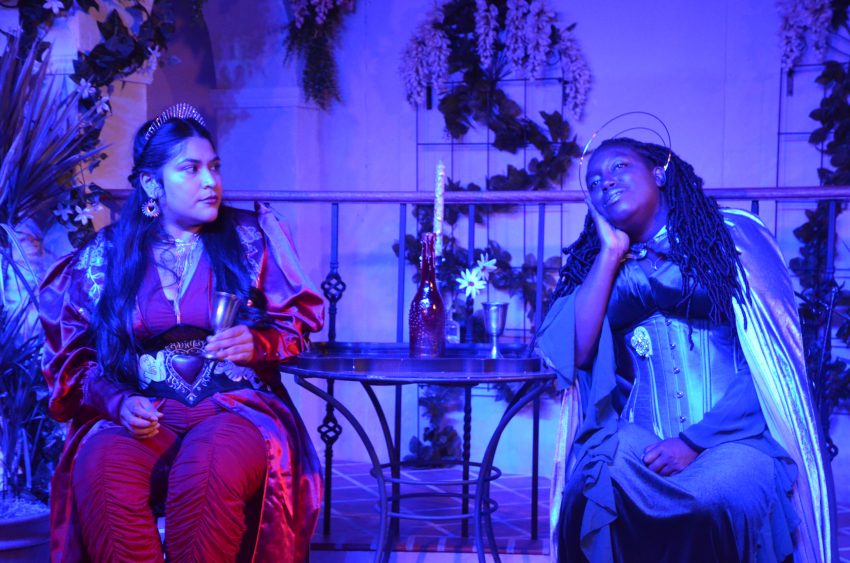 “House of Desires” offers a delightful bounty of surprises as it explores forms of love and the humorous predicaments of romantic couples.

In La Val’s tiny underground theater, we can feel the breeze as an actor passes in front of us. How can nine actors work on the such a small stage, I wondered, as I eyed Quinnton Barringer’s 17th century hacienda patio made of Mexican tiles, latticework, and old-fashioned lanterns.

Director Elizabeth Vega creatively uses every inch of the Subterranean Theatre space, including entrances, exits, and theater seats. She envelops us all in the “House of Desires,” as we become part of the play. The actors break the fourth wall to ask us questions, pulling us into the Shakespeare-style comedy.

Written by a cloistered Mexican nun in 1683, Sister Juana Inés de la Cruz frowned on Spanish colonialism in Mexico. As a poet and philosopher, she felt limited by Spanish rule. Sor Juana struggles inside a Catholic Church that denied women education or freedom.

In her tale, we witness two wealthy, strong, and passionate women in 17th Century Mexico: Doña Ana (vibrant April Ballesteros) and self-satisfied Doña Leonor (intrepid Brittany Sims). The two aristocratic women believe they love the same man. As Doña Leonor, Sims declares to someone behind me: “I could love no one, though I was loved by all.” She shares both her conceit and her entitlement.

Underneath the playfulness lies the bare truth of love, compromise, and greed, as strong among the privileged elite in 1683 as it is today.

The master of the house, Don Pedro (arrogant Konnor Heredia) wants to marry Leonor to impress her father, Don Rodrigo (steadfast Jeanette Sarmiento). Don Pedro is climbing the Spanish colonial social and political ladders. His idea of love is overwhelmed by his eager ambition, much like today’s vulgar billionaires and oligarchs.

As the characters play hide and seek, their cavernous meeting room goes dark. The loving couples freeze, a hair’s breadth between heroes and villains. The servant Celia (witty Maria Figueroa) woos Castaño (versatile L. Duarte), servant to Don Carlos. The lovers whisper to us, leaking plot information, a bridge between the audience and scheming characters. The poor servants hold all the secrets of the wealthy.

Director Vega incorporates modern conflicts to highlight the sad persistence of these issues. Don Rodrigo’s handmaid Hernanda (attentive Susannah Wood) waves a sign behind her boss’s back: “Our lives. Our bodies. Our choices.”

“House of Desires” reflects stark truths in an amusing style, centuries later. Equal rights for women are faltering again under patriarchal domination and clueless Congressmen, rampant in government.  Those Women Productions, thanks to the genius of Sister Juana’s comedy, urges us to remember: “Our body. Our lives. Our choices.”  A must see.