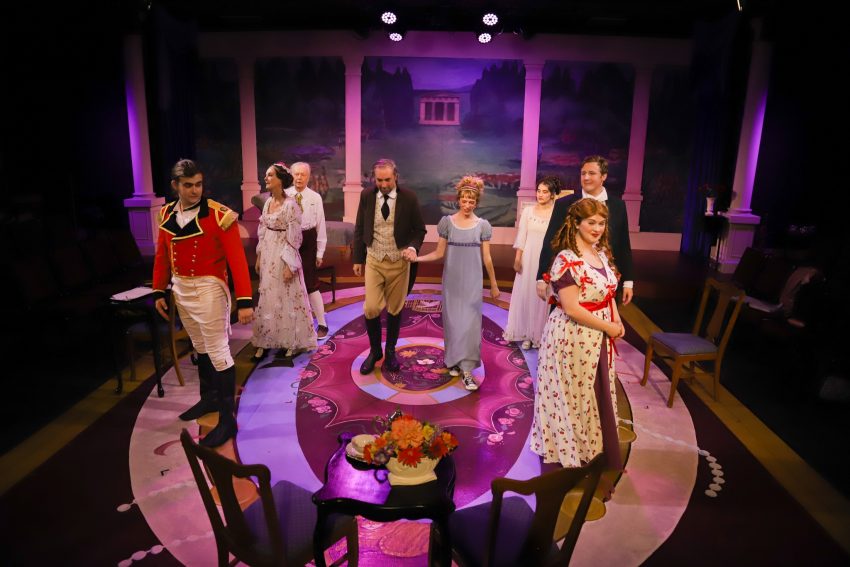 Among the five Bennet sisters, we focus our attention on Elizabeth. Lizzy stands out, richly played by questioning, argumentative Miranda Jane Williams.

Like Downton Abbey, Hamill breaks all social barriers to scoff at conventional ideas about romance and marriage.

The pace is quick, as the cast moves antique furniture around Designer Jamie Phanekham’s spot-on period set. We are whisked between two different drawing rooms, where the rebellious sisters play ball.

Proud landowner Mr. Darcy (roguish Matthew Cadigan) has unexpectantly taken to Lizzy, even though she’s brash and prejudiced. Lizzy argues against marriage without affection. In fact, she is hell-bent on not marrying at all, period!

It’s fun to see Lizzy and Darcy verbally sparring while dancing the minuet. She finds his responses arrogant, and he finds hers obstinate. They fall all over themselves to prevent falling in love.

In a funny caricature of an overbearing mother, formidable Kristine Ann Lowry plays loud, brash Mrs. Bennet. She devotes her life to plotting the marriage of her five daughters. Lowry also plays a non-speaking servant, in complete opposition to the privileged, complaining Mrs. B.

Director Laura Downing-Lee captures the effectiveness of the inventive double-casting at each step. She has taken up playwright Kate Hamill’s challenge to turn Austen’s novel into a broad comedy, and succeeded, brilliantly.

Downey also plays the rambunctious, and sometimes drunken 14-year-old, youngest sister who, in fear of being a spinster, marries heartless Mr. Wickham (staid Elijah Pinkham). We pity her youthful impetuousness under the terrible pressures on young women.

6th Street Playhouse unfolds a delightful satire in a frolicking style that makes hidden comic truths bloom. Come and enjoy a charming comedy that opens our eyes with fast-paced wit and wisdom!

“Pride and Prejudice” by Kate Hamill, based on Pride and Prejudice by Jane Austen, directed by Laura Downing-Lee, at 6th Street Playhouse, Santa Rosa, California. Info: 6thStreetPlayhouse.com – to Sunday, August 28, 2022.