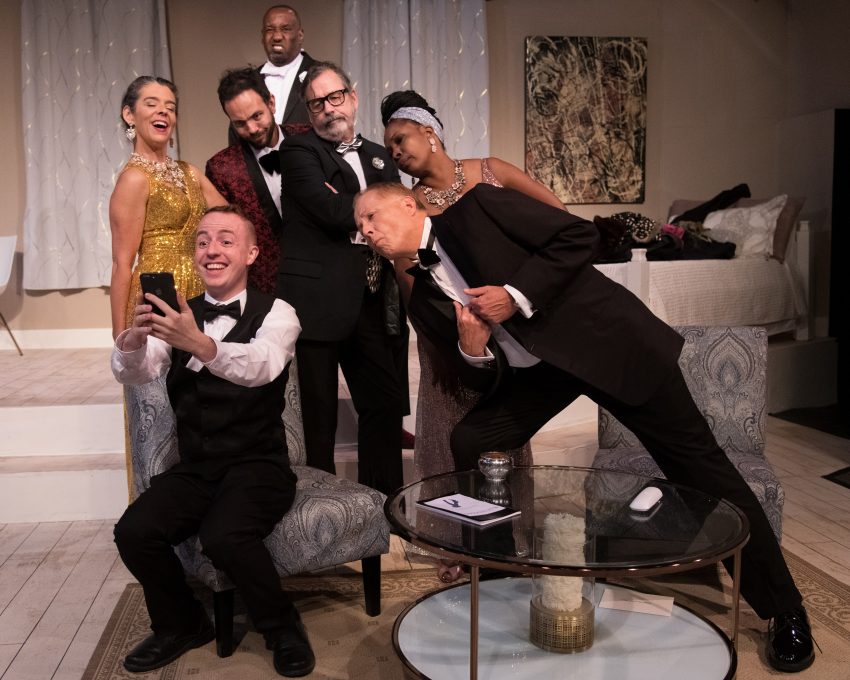 In a country where our media gives us polished content, Terrence McNally’s “It’s Only a Play” reminds us how beautiful imperfections can be. McNally takes us inside the theatre makers’ process.

The cast of a newly flopped play rediscovers their love an unstable industry—that’s all about reveling in the moment. I think we could all use more of their “in the moment” mindset.

Virginia Noyes (precise Alicia McCauley) inspires us with her monologue about why live theater is so precious. It’s always in the moment, no edits, no cuts—whatever happens, happens. Costume designer Janice Stephenson dresses Noyes in a splendid, ombre rose, glittering dress with her braids wrapped in more silver; while Kelly Rinehart glitters in gold. They shine on stage!

McCauley’s comedic timing shines along with her dress. When the cast of a new Broadway play anxiously awaits the reviews, Noyes unapologetically lines up a dozen drugs like hors d’oeuvres. The washed-up Hollywood actress’ ankle monitor hilariously rings out, interrupting her optimism, and leaving me wanting more Noyes.

Successful TV actor James Wicker (spunky Ronnie Anderson) flaunts his success in front of his best friend, playwright Peter Austin (Reg Clay). He’s smug, self-satisfied, and farcical—pretending to be happy for Peter. Wildly, Wicker claims that western Civilization is crumbling because everyone has a voice now.

When the reviews come out, they all read them on a smartphone—no more newspapers. With platforms like YouTube and Instagram everyone gets a piece of the digital pie. Bravo for online theater-makers & critics everywhere!

The director of the flopped play, Frank Finger (animated Jake Gleason), complains about all the fake people we encounter in the theater. Finger, in his pretentious British accent, boasts about his upcoming knighthood, just to put down the Yanks. He’s just another “faker.”

My eyes pop open when his haughty image dissolves—as he reenacts his father’s beating him for his theatrical ambitions. Gleason slaps himself, then hunches his shoulders in fear of his shouting dad.The pace finally ramps up.

Poor Frank exposes how formulas and fashions twist and how misrepresent our unique stories—for “likes” and profits. To make a long-lasting impact, storytellers must focus on honesty rather than what they think folks want to hear. They must inspire their audiences with new ideas.

Even though playwright Peter worked hard writing his play—it’s not about how hard we work; but how the audience receives it. So, might as well not take yourself too seriously!

Despite their desperate characters, the cast shows resilience. They start writing a new play in the middle of opening night—bouncing ideas off each other, reading out loud, and playing in the moment!

“It’s Only a Play” reminds us that it’s only “content.” So be content and experiment. You might write a hit! McNally shows us the tricks onstage.