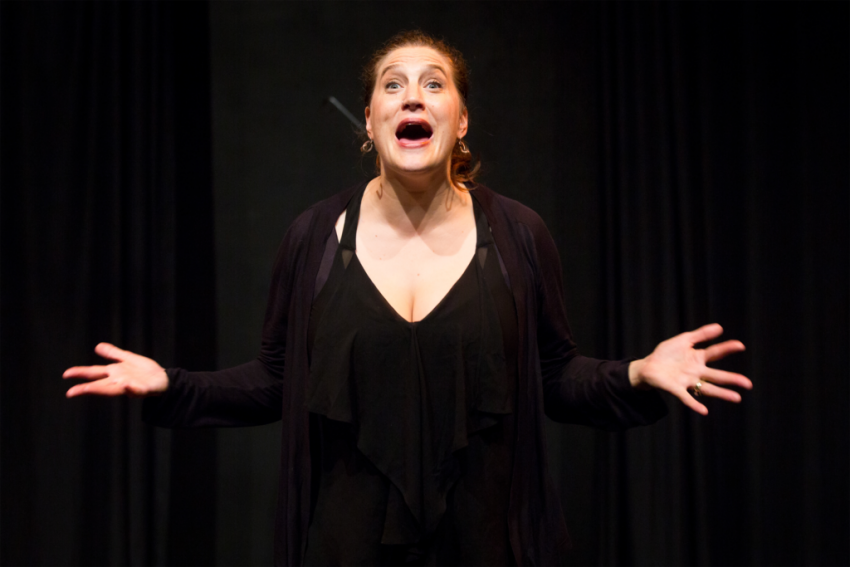 Abortion rights are tangled up again. We’ve got access in California, and we’re lucky to have Medicaid to cover the cost. But in Tennessee and Texas abortion is banned even for rape and incest victims. It feels like I need a legal degree to figure out what’s going on.

Complicated, right?  But not as confusing and complicated as the decision each individual woman makes when facing an unplanned pregnancy. And that’s what Joyful Raven captures perfectly—and hilariously—in her one-woman show “Breed or Bust.”

I can’t remember the last time I loved every minute of a production, but I did for this one. I’m telling my friends to go. We all need to laugh.

Energetic and confiding, Raven engages us from the get-go.  We learn her background growing up in a commune of hippies. We learn of her early carefree artist’s way of life. We meet the boyfriend.  Then those two damned little blue lines show up on the pregnancy test, and her carefree life turns intense.

Raven interacts with the audience throughout the performance, sometimes teasing us but always kind. To be fair, the audience interplay is not always Raven’s choice. More than once a woman in the audience watching the action couldn’t help but yell out, “No!” or give a cheer of approval. I can’t remember sitting among a more engaged audience.  Raven responded to every outburst, incorporating it into the performance. She’s a pro.

There’s real fun when Raven assumes clever personas. She’s the boyfriend, her best friend, hippies in the old commune, and more.  At one point she embodies her out of control motherhood instinct as a fabulous “Baby Monster” who leaps on the bed desperately trying to take control.

When Raven imagines talking with the fetus, who serenely considers the pros and cons of life on earth, any fundamentalist Christian present would have a heart attack. Fortunately, none were in the audience at PlayGround that night.

I’m a veteran of the sex, drugs, and rock ‘n roll era of the 1960s, so I thought I knew my stuff. It is therefore humiliating to admit I flunked the show’s sex education question on the clitoris. Somehow, I missed the 1998 Australian research and 2009 French sonography.  I don’t want to spoil anything so will just say: You gotta see the clitoris replica Raven presents. I’m just glad I found out before I died.

The show is no political manifesto, it’s one woman’s story of her own journey and her options. For all the comedy, it touches deep when Raven works to come to terms with her choices and wrestles with what it means to be a woman.  It’s complicated.

Fresh off a successful Hollywood Fringe run, this show is for mature audiences. Women, if your Significant Other is, or identifies predominately as, male, take him/they for educational purposes.

I can guarantee you’ll have a good time if you come with women friends. You might even find yourself calling enthusiastically to the stage with advice.