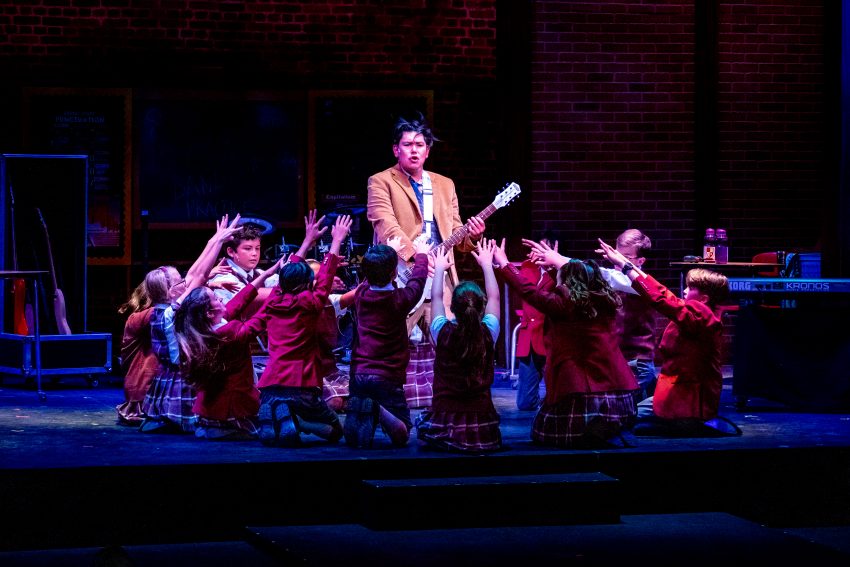 Palo Alto Players has produced a heartwarming and inspiring musical. I walked out of the theater with a smile on my face, feeling the joy of the students at Horace Green Prep after they compete in “Battle of the Bands.”

The talented young actors sing angelically, as they stand in the aisles, intimately conveying their need to be heard. In the song “If Only You Would Listen,” the kids plead to the teary-eyed parents in the audience with kids their age: “I’ve got so much to say, / If only you would listen!” We empathize with the children’s need to express their feelings to their parents.

Like the kids in “School of Rock,” South Bay and other Bay Area students sometimes suffer from cutthroat pressure to achieve their parents’ high standards. High school students overload their schedules with college courses. They also sacrifice sleep to rack up extracurricular credits. As a Cal student myself, I share their anxiety.

In the beautiful setting of red brick walls at exclusive Horace Green school, we are compelled to examine unhealthy competition for Ivy League admissions.

Messy-haired, aspiring rock star Dewey Finn (energetic Jomar Martinez) lies his way into Horace Green as a substitute teacher. After his band “No Vacancy” kicks him out, just before the big “Battle of the Bands” contest, Dewey tries to transform his overworked students into a rock band. But can he bring a fresh outlook into to these up-tight kids’ lives? Can he defy authority?

Dewey introduces the kids to rock music by teaching them to stand up for themselves. These children have everything, but they are not allowed to follow their dreams.

Electric guitar player Zack (talented Rafael Frans) unchains himself from social conformity, singing: “I might not be that perfect son, / but ya’ll be rockin’ when I’m done.” Frans asserts his newfound passion and the onstage orchestra soars with his infectious energy: the newborn band stomps, claps, and rocks out!

Dewey channels his frustrations into the heartfelt song “Stick It to the Man,” which still rings in my head. Martinez brilliantly captures Dewey’s rage and hope. Every arm wave and guitar strum signals Dewey’s anger at folks who have ignored his talent. Together, Dewey and the children liberate themselves from the toxic pressures of rigid expectations.

Even perfectionist Principal Rosalie (sensational Amy Kohmescher) finds liberation. In lyricist Glenn Slater’s touching “Where Did the Rock Go?” Rosalie recalls how rock touched her soul when she was young.

Kohmescher’s glowing eyes tell us that Rosalie’s hopes are still alive, encouraging her to pursue dreams she left behind. We are overjoyed as Rosalie comes out of her shell to embrace a long-lost passion.

With heartwarming honesty, “School of Rock” pinpoints the school and cultural demands that even young students face today. I enthusiastically recommend this down-to-earth show to both teens and adults.

Banner photo: Jomar Martinez (Dewey) and the kids “Stick it to the Man.” Kate Hart Photography