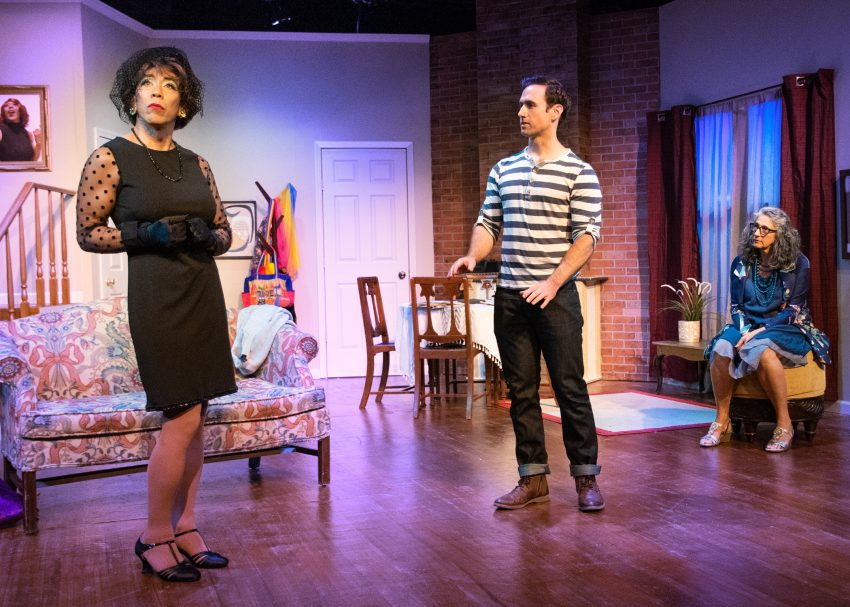 At New Conservatory Theatre Center, it’s time to see a rollicking comedy about unexpected collisions between gay and straight life. “Aunt Jack” is a dazzling and enlightening ride that takes your breath away!

“Aunt Jack” bursts with new ideas, heated confrontations, and intellectual arias. Nora Brigid Monahan’s play examines the gender progress we’ve made since the 60s under the bold, harsh light of today.  “Aunt Jack” is a delicious soufflé of quick wits battling issues of LGBTQ+ sexuality. They argue, revealingly, about queer, Bi-, Pan-, and Poly-sexual flavors of amour. It’s the best cocktail party ever.

Confused gay son Norman (endearing Nick Trengove) may not be so gay anymore. Norman looks at everyone with puppy dog eyes, trying to be a good old-fashioned lover to his ex-boyfriend Ian (multi-faceted Ryan Marchand). Trengove and Marchand win our hearts as they struggle with love. We warm to Hamlet-like Norman, even after he infuriates his opinionated gay family. Maybe we sympathize with his struggle to become himself.

Norman’s gay father George (mesmerizing Jim Rupp), a feisty scholar and gay activist, is getting a lot of blow-back on his ideas. And the attacks come from new style gay thinkers. Not all gay people agree with his idea of  “gay” in the world. He changes his tune when he comes back as a reformed ghost. With plenty of ghostly wisdom to share, he’s a hoot. Rupp makes him lovable, too.

And we get to see how Daddy George’s long-term, younger husband Jack (hilarious Joseph Alvarado) attacks their stepson Norman for straying from gay norms. As a popular drag queen who sings in the aisles at Whole Foods, Jack connects the rigid old gay guard and new categories on the LGBTQ+ rainbow, despite his disappointment.

It’s just fun and funny listening to a gay step-father who is also a part-time drag artist chastise his supposedly gay son about his sex life. Not only does he turn American straight values Topsy-turvy, but he is outraged when he suspects the son may be going with a girl!

When Norman brings home a new love, infuriating the fiery Jack, we feel their funny process of self-discovery. Sex bursts out in unexpected places, bringing a delightful expansion of sexual and gender potential—breaking new ground.

And you can see the marvelous Jennifer McGeorge, as Phyll, the Mom., an activist lesbian. McGeorge’s Phyll takes off like a rocket—an ego-driven Brooklyn lawyer who just cannot let go of her son—though she hasn’t been much of a mom. She brings down the house with calculated hysteria.

“Aunt Jack” is the play I didn’t know I needed to see. As we take in their bickering and backstabbing and boycotting, we realize that it’s all motivated by love. Misguided, mistaken, misremembered—but still love. I want to see it again.