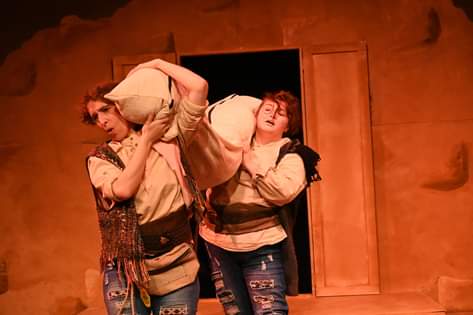 “Zac & Siah or, Jesus in a Body Bag” is a satirical, sometimes slap-stick study of the power of prophets over their trusting followers. Lo’s  rough and tumble comedy, spiced with deadpan seriousness, takes us to groundbreaking ways of seeing religion.

The floor of the intimate Phoenix Theatre is painted with colorful flames, highlighting carved stone caves in the background, and scattered movable rocks. We sit at the edge of inventive designer Sarah Phykitt’s set, which draws us into the comic action.

Zac and Siah represent Christ’s gob smacked inner circle of workers who manipulated his miracles.  They promote his tremendous showmanship, as he proselytizes the masses. Not much different than Trump, Johnson, or Bolsonaro who attract mobs of fascinated followers.

After witnessing Christ’s crucifixion, the two buddies struggle with his loss. Why did he allow this and even plan for its unfolding?

In a quandary, they still believe that Jesus taught love, forgiveness, and charity for the poor, saying, “He pushed us to be people we didn’t want to be.” When J.C. needed fish to feed the masses, they gathered all those fish. Zac even learned to change water into wine. They still believe and assert, “Be there for him, he’s been there for us.”

JC said he would be resurrected in three days, but he’s dead as a door nail. So, like Laurel and Hardy, they comically decide to hide his body. Now, his followers will believe he has risen and follow his teachings.

Director Adam L. Sussman uses the small space astutely and maintains a quick pace. The characters switch easily from drunken goofiness to powerful arguments about truthfulness. Jeffrey Lo’s play shows how far followers will go to protect their leaders when they identify with the leader’s power and message.

Energetic Siah (talented Maria Marquis), the optimist, believes JC may have rigged the whole crucifixion scene. Somber Zac (questioning Perry Fenton) has doubts. Even these friends disagree about JC’s showmanship and honesty. But both buddies believe in Jesus’s magnetism, his charisma. He draws people to him and gently helps them change their selfish, sinful ways.

Enter the official Roman guarding the tomb, sensitive and loud Joshua (dramatic Tony Ortega), who  longs for figs and would do anything to get some of the fruit. He glorifies figs, symbolizing humans’ need to hold something or someone higher than themselves.

The fight scene toward the end, well-orchestrated by Fight Choreographer Kristen Matia, drags on too long, as does carrying the body to a cave. But it’s the questions Zac and Siah ask that hang in the air for us to ponder, questions well worth exploring.

“Zac & Siah or, Jesus in a Body Bag” presents a fun-filled way to explore profound doubts  about how we  view the power of faith and our so-called leaders. Worth seeing.