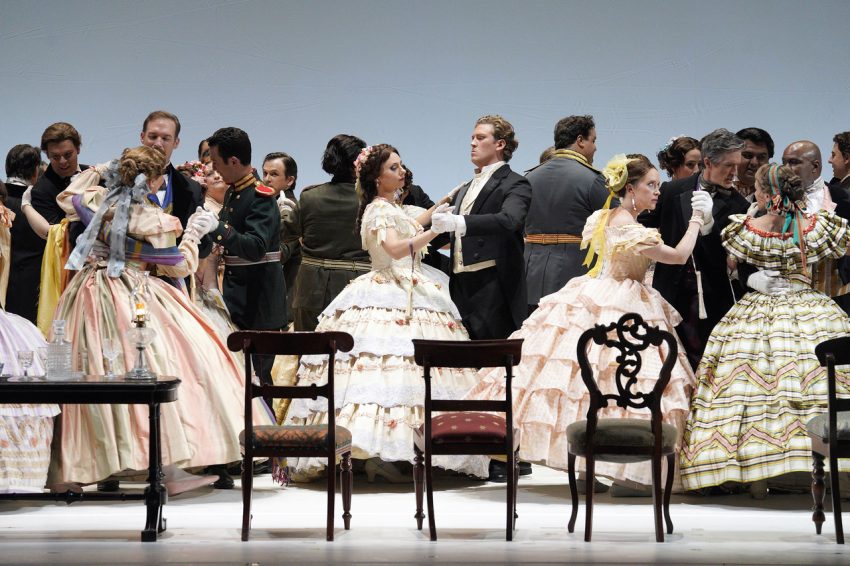 Tchaikovsky’s “Eugene Onegin” shines as the perfect follow up to SF Opera’s Centennial extravaganza “Antony and Cleopatra.” Rather than the elaborate ‘love story of the ages,’ “Onegin” is a subtle, intimate story of romantic disappointments and ­­­the recovery of human dignity.

Tchaikovsky, himself, is the hero of his opera. Echoing his own harassment as a gay person, he offers some of the most rapturous music of his career.

In Czarist Russia, Tchaikovsky was threatened with prison if word leaked out that he was gay. At one point, he married a woman to escape persecution and ridicule—but that ended quickly. He is also rebelling against the brutal czarist repression of minorities, women, and slaves in his time.

Conductor Vassilis Christopoulos directs the orchestra to a lavish, expressive performance, drawing our focus to emotions, voices, and instruments. The score comes alive with love and loss, from great highs to deep lows—simply gorgeous— mirroring Tchaikovsky’s struggles and secrets.

The vast, empty stage spaces suggest the arid and barren life of these aristocrats. Lighting Designer Christine Binder uses hazy, diffused colors to light the stage with a deep autumnal sentiment; the warm tones evoke both romance and despair.

Her nursemaid Filipyevna, (intense mezzo-soprano Ronnita Miller) sings passionately and forcefully, warning Tatyana about the instability of romantic love. Nonetheless, Tatyana stays up all night writing a love letter to Onegin. But Onegin rudely rejects her, condescendingly telling her he is not interested. Brute power shows itself in Onegin’s callous manners.

Bretrayed and hurt, Johnson transports us with a strikingly beautiful aria. As Lensky, he mingles tender love with agonizing pain—highlighting the opera.

Onegin returns years later to find Tatyana a princess, the beloved wife of Prince Gremin (moving Ferruccio Furlanetto). The prince explains that Tatyana’s love has redeemed his life. Like an envious emperor, Onegin wants what he threw away. As he sings of misery and despair, Bintner’s voice is forceful, yet deeply soft and vulnerable—now he too is heartbroken.

“Eugene Onegin,” a simple narrative of “poetic justice,” makes a perfect streamlined opera, while foreseeing a clash between harsh rulers and submissive serfs.

Tidy story, uncomplicated set, and gorgeous music by the great Tchaikovsky, with solid performances by S.F. Opera. The only controversy here is current politics…should a U.S. opera company popularize a Russian opera during Mr. Putin’s widely unpopular and unjust war against sovereign Ukraine? S.F. Opera answers definitively by lighting up the War Memorial Opera House with blue and yellow lights.