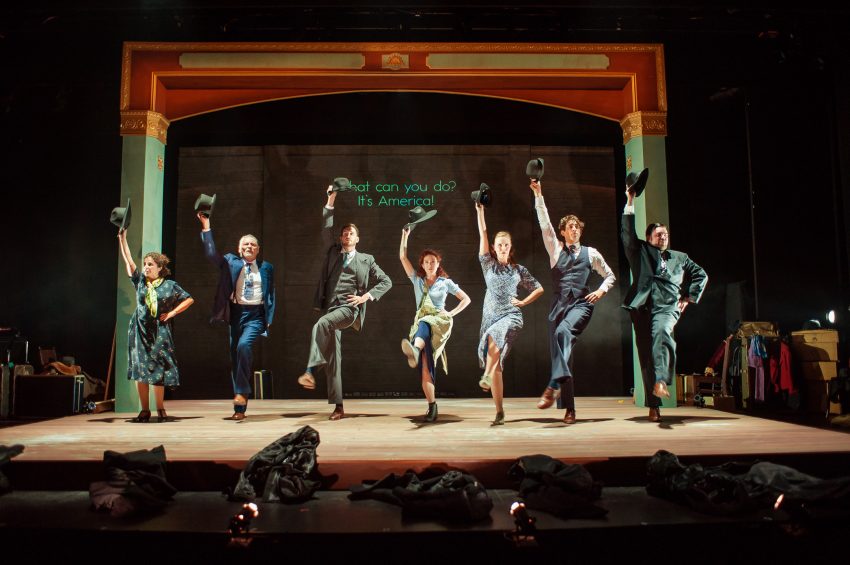 Paula Vogel’s “Indecent” holds Sholem Asch’s play “God of Vengeance” tightly in its heart, carrying it from the Jewish ghetto in 1906 Poland to its fateful future in 1923 at New York City’s Yiddish Theater.

Vogel shows us the real-life, first reading of Asch’s play in a Polish attic, depicting disputes between an angry father (Victor Talmadge) who lords it over his wife (Rachel Botchan), and his 17-year-old daughter Rivkele (Malkla Wallick).  But her father cares only about appearances. And he runs a brothel in their basement! His hypocrisy is shameless.

Women’s liberation beats at the heart of “God of Vengeance.” Rivkele falls in love with Manke (Rivka Borek), who works as a prostitute downstairs! We are invited to sympathize with a manipulated daughter and a sex worker in love—way too much liberation for 1923 Broadway! In their steamy revolt—against patriarch and pimp—the two women make a new Herstory.

Simultaneously, “Indecent” depicts the Yiddish actors’ dedication—making Asch’s life and play an artistic hit across Europe. The whirlwind of Yiddish dances and songs, joy and terror, make a thrilling docu-drama depicting the play’s evolution across time. Director Susi Damilano has energized a grand cast of seven top-flight actors who portray a fascinating panoply of artists.

The defining visual of the play, Yiddish Theater’s old-fashioned proscenium arch, sits astride the stage in majesty. Under it, seven actors in greatcoats gracefully depict decades of fear, hatred, and deportation—under the cruel father and the real-life Nazis.

Sholem Asch (touching Billy Cohen) sees his early play become a scandal in New York. No way two Jewish women could fall in love! How dare Asch expose an abusive Jewish father! While “God” was successful all over Europe, Broadway couldn’t handle it; a conservative rabbi calls the police with dangerous results.

The linchpin of Vogel’s historical melodrama is Lemml, played by the unforgettable Dean Linnard, the Stage Manager from that first reading. With touching empathy, Lemml says, “That play changed my life.” He changes from a tailor in black garb to an international actor. Linnard physically embodies the Jewish story—personally and politically—in a stunning performance.

“Indecent” takes us on tour from the ghetto in Poland, through Europe, to the New York Yiddish Theater. Each time we see the final scene replayed—with increasing art and emotion–we hear the father exclaim: “You know what this Torah cost? Whores had to work a year on their back to pay for this Torah!” as he raises the Torah into the air, threateningly.

A play celebrated in the capitals of Europe is labelled “indecent” in America: “We didn’t encounter this type of censorship until we came to America and put it on Broadway.” It was the first time that two women kissed on stage. And a prostitute, too. Scandal!

Vogel spins the hands on the clock until we see a whole century through Asch’s controversial play. Damilano’s production spans from exhilaration to despair —full of celebration, music, and foreboding. It’s touching, emotional, and true! Don’t miss it.