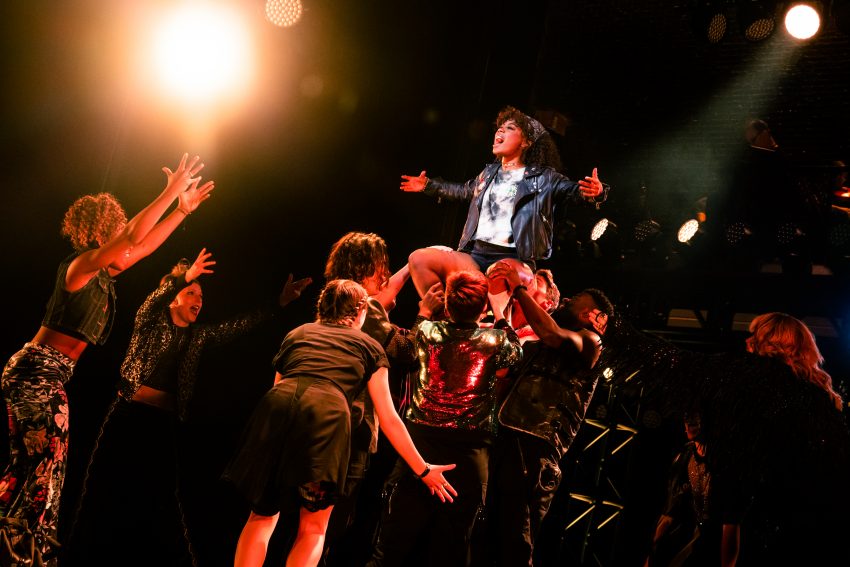 Like the teens it portrays, the music varies from brash to melancholy.

The underlying plot is simplistic, but profits from very fine acting, rare in musicals. We have the quintessential, dysfunctional, soap opera family, a step down from Morissette’s complex musical montage. The mother, Christmas letter writer, and car-accident survivor is prescription drug-addicted Mary Jane (magnetic Heidi Blickenstaff), a powerhouse of both acting and singing.

When Mary Jane can’t get her opiate fix legally, she buys drugs in alleyways. She denies sex to her husband Steve (ardent Chris Hock), who quickly turns workaholic and porn-addicted. His calming voice is often overpowered by his wife’s.

Their bi-sexual, adopted Black daughter Frankie (impassioned Lauren Chanel) frequently demonstrates for social justice, joining rallies with big signs: “Does My Period Scare You?” and “Fear Has No Place in our Schools!” As the most angst driven of the teens, Chanel plays Frankie with the right mix of anxiety, anger, and confusion.

Frankie loves her girlfriend, Jo (dynamic Jade McLeod), her lover and best friend. But she is falling for Phoenix (sweet Rishi Golani)–a guy. So begins a “no win” conflict for the triad.

And I’m here, to remind you
Of the mess you left when you went away
It’s not fair, to deny me
Of the cross I bear that you gave to me
You, you, you oughta know

The updated lyrics are the star of show, with music by Morissette and Glenn Ballard. The touching lyrics, sometime muffled by the volume, convey a universal depth and meaning for all ages. Frankie and her new crush Phoenix sing “Ironic,” lamenting our life’s twist and turns:

A traffic jam when you’re already late
A “No Smoking” sign on your cigarette break
It’s like ten thousand spoons when all you need is a knife
It’s meeting the man of my dreams, and then meeting his beautiful wife
And isn’t it ironic, don’t you think?
A little too ironic, and yeah, I really do think

With masterful coordination, Director Diane Paulus blends 23 personalities into a synergy of sound and movement.

The voices soar, taking over the massive theater. I love the gifted dancers who blend as a chorus, but also dance in intriguing, individual styles. Some dancers shiver and shake like blurred contortionists, while others move gracefully, like willowy Courtney (adroit Jena VanEslander) who melts over a couch. Choreographer Sidi Larbi Cherkaoui blends them all into a spectacular stage event.

While the music fluctuates from hard rock to softer ballads, Morissette’s lyrics deliver the moody pain of contemporary youth. When Frankie sings “Unprodigal Daughter,” she reminds us of the 70s mass exodus to California in search of freedom. We feel Frankie’s conflicts with her deeply troubled family:

Unprodigal Daughter heading out onto into my quest
Disenchanted daughter and this train cannot move fast enough
Unencumbered daughter hit the ground running at last!
I’d invite you but I’m busy being unoppressed