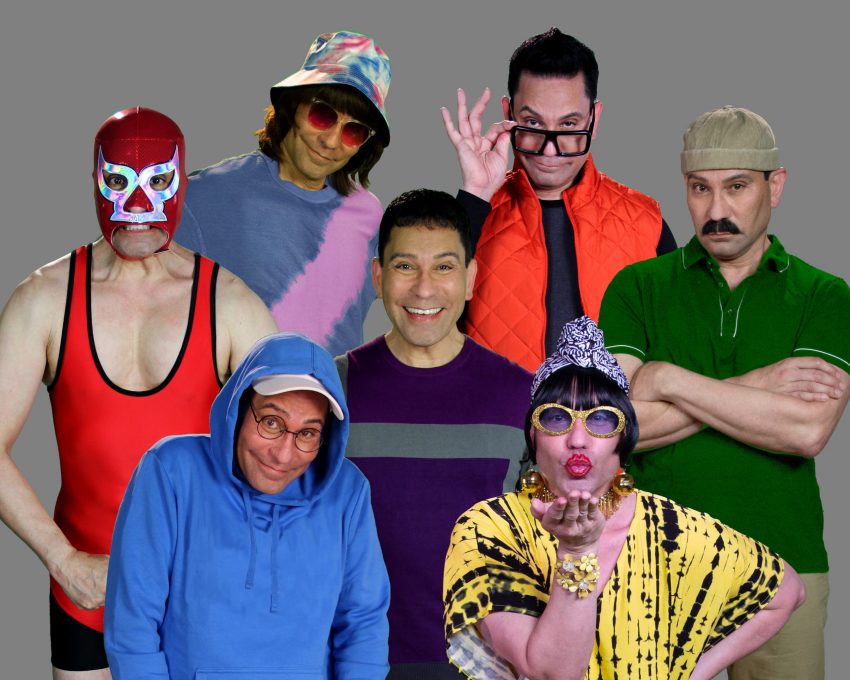 There’s a lot of Good Guys and Bad Boys in Guillermo Reyes’ “Bad Hombres” at Theatre Rhino’s new play at their sweet new home on 18th Street in The Castro.

Remember when the Orange Guy descended the gold escalator at his Tower and slandered all Latin men, calling them “Bad Hombres”? Using satire, drag, and gay comedy, Reyes counters the Orange Blob’s slanders of immigrants and Latinos. And it’s all brought to life by a rainbow hurricane named Rudy Guerrero.

Rudy Guerrero is a national treasure. He assumes identities in the flash of an eye. He is a naïve gay boy, a flashy drag queen in a turban, a masked Mexican lucha wrestler, a smug Border Guard, a nasty rejecting father. There’s pure gold in Rudy’s multiple transformations. And he does the costumes, too!

In” Dating for Beginners,” we meet sweet 21-year-old Ulysses Maximilian Lopez who waits impatiently for a Grindr date, whom he then puts down with a nasty wit. Making desperate fun, he snarks, “Oh, you showed up to your date wearing shorts?” The boy self-destructs.

Unconsciously, Ulysses sabotages his own possibilities for love. Guerrero’s gay Latino sabotages himself; he cannot compete in Gringo-landia. Being cute is not enough, you must be savvy, too. His motto is: “Date Me! Deport Me!”

In “Catholic Boy Meets Cholo,” our boy falls in love with an L.A. gangster. But the boy is focused on raw, impersonal sex. The Cholo admits that “he usually beats up on bookworms.”  So, the boy denies his love for books, submitting to hard, hot sexual domination. Guerrero plays both roles fluidly, moving between them like quicksilver. Here’s the smart student calling for help:

So, please, Hispanic hotline, what shall I do? How shall I explain my indiscretions to my Catholic, Chilean-Spanish-American family? And really now, what I really want to know is, will this affect my application to Harvard?

In hilarious “El Chapo El Sapo El Guapo,” a romantic film student falls for El Sapo, the son of notorious drug dealer El Chapo. Inevitably, his love leads to self-destruction. The student finds himself working for the FBI and having sex on film, exclaiming, “Oh, my! I was feeling so Stormy Daniels.”

Playwright Reyes condemns the American spy mentality that uses gay Latinos to pit immigrants against each other. The Border Patrol has no qualms about taking sex in the name of the red white and blue.

Reyes and Guerrero speak up for gays in rollicking cartoon videos, sharply drawn identities, and classic farce. Reyes depicts Latin fathers who refuse to accept any deviation from the Macho model.

Rhino’s new home is intimate and Rudy Guerrero is but an arm’s length away. With a big screen and brilliant costumes, Reyes exposes our current political outrages, challenging us to face reality. Get your tix now—runs only to October 30!