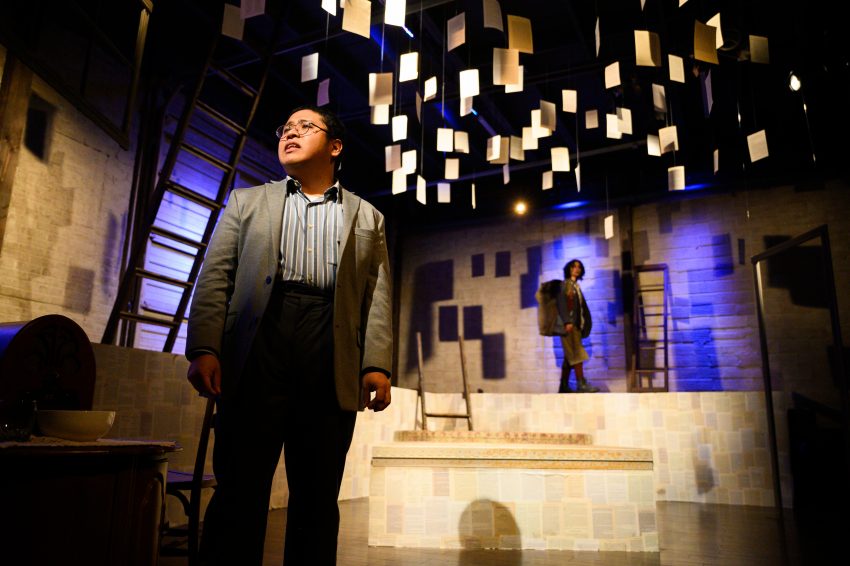 “Book of Sand (a fairytale)” is Lisa Ramirez’s creative adaptation of Jorge Louis Borges’ fantasy short story “Book of Sand.” Ramirez introduces us to a man named HE, who buys a book with infinite pages. As a Borges fan, I was excited to see how she develops a four-page story into a seventy-minute play.

HE, played by versatile Kevin Rebultan, is a lonely recluse with few friends. SHE, dynamic Carla Gallardo, knocks on his door and enters dressed like a cross between a street person and a tarot card reader. She screams like a druggie on acid. Soon enough, we can even hear the chorus of voices churning in her head.

SHE’s there to sell him a book she bought in India, titled “Holy Writ.” The holy that was written, however, has no beginning and no end, and the pages are arbitrary. The book goes on forever, never the same.

HE buys it to acquire unlimited literary power. He only has to decode it.

I am taken into the fantasy by Designer Karla Hargrave’s magical setting, which feels like Alice’s Wonderland. Individual book pages hang from the ceiling with a lone window frame. I wondered what one would see through that window, and longed to pull one of those pages down to read. Ladders lean on brick walls, and an imposing, magnificent, pastel-covered, bed-sized book lies flat on center stage.

As if on psychic cue, the giant book opens, exposing a huge sandbox. Great imagery. HE wades into the box with the antique book and buries it in the sand, grabbing the sand that symbolizes its endless pages. A transformation is beginning, like baptism in water.

Unlike Borges’ fantasy story, Ramirez fills in the pages that HE experiences. She draws us into his obsession with the book—experiencing sleepless nights, starvation, and restless thrashing in the sand. Ramirez infuses the drama with contemporary stories, feelings, and music.

HE questions his life and the literature he loves as each page reveals itself.

SHE, no longer the book seller, monitors and mimics the individual tales. She climbs the ladders and taunts him as if the “Book of Sand” speaks through her. Rebultan and Gallardo quote from the book in perfect syncopation and harmony, creating an eerie fusion.

The vignettes follow HE’s changing internal process, beginning with his metamorphosis: A news blast of the 1989 earthquake blares on the radio. Both HE and SHE are thrown to the floor while a solemn aria drifts though the theater.

Following: A sojourn of struggles through the hot desert, to the song, “A Horse with No Name.” Don Quixote’s battle to achieve his dream, “To Dream the Impossible Dream,” as HE nears the end of his quest.

Yet, the climactic last scene, presents a questionable twist. How far will HE go in his obsession?  Have his feelings changed about the “timelessness” of literature?

The acting, setting, and perplexing questions that flow from “Book of Sand” provide its charm and attraction. Come see for yourself.