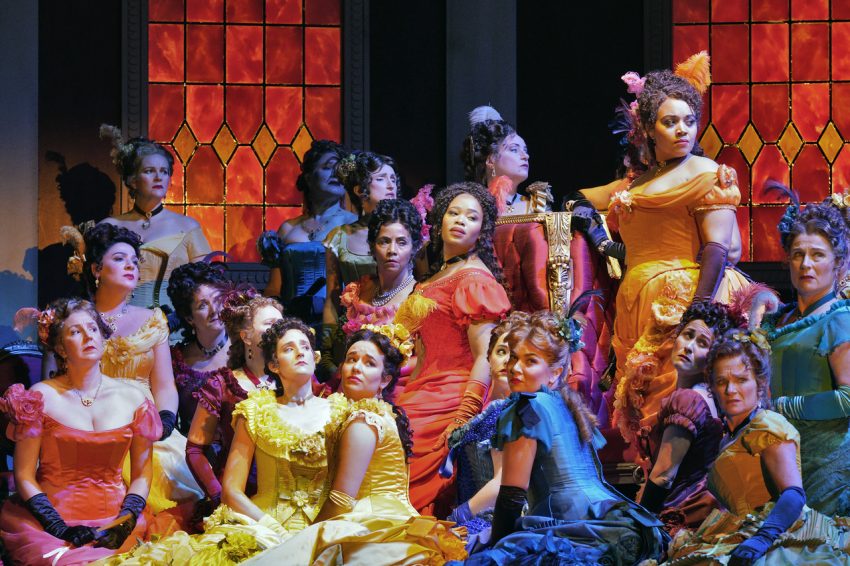 When Violetta (divine Pretty Yende) has been rejected publicly, all the elegantly dressed Parisian women flock around her. They have been having spats with their men, too, and they rally around Violetta, despite her reputation.  The women in bright gowns circle her, protectively, in a magnificent tableau. All the women stand by the “fallen” woman. The men back off, rejected and surprised.

The SF Opera’s 2022 La Traviata brings joy and insight—a once in a lifetime experience. In 1853, Giuseppe Verdi has seen through the facade of polite society, witnessed the fate of a Parisian courtesan, and based his opera on the play by Alexandre Dumas. Verdi uses the libretto by Francesco Maria Piave to make his own indelible musical statement.

Verdi’s gorgeous score tells a story popularized in Pretty Woman, where a sex worker breaks out and says “Me Too!” Faced with sexual exploitation by smug middle-class men, Violetta becomes a heroine we all can love.

And what a heroine we get—the superb South African soprano Pretty Yende strikingly evokes the young and sympathetic Violetta Valéry, the Parisian courtesan.  Yende brings down the house with her deeply sensitive and emotional Violetta. Her “Sempre Libera” aria is breathtaking and her sensitive acting proves unforgettable.

Conductor Eun Sun Kim, a hero in her own right, brilliantly leads this extraordinary cast and the acclaimed SF Opera Orchestra in Verdi’s rich score.

In a night where everything works, much credit goes to SF Opera’s design team: Production Designer Robert Innes Hopkins, Lighting Designer Michael Clark, and Choreographer John Heginbotham. Their brilliant work puts the hypocrisy of the cynical Parisians on grand display.

Gender-queering is the order of the day, as a  man in a tutu plays with a courtesan’s feet. And a bi-sex quartet prances, each dressed half in tux and half in red ball gown.

The famed “naughty party” with fabulous costumes and rich colors, exposes their exploitation of pliant women and the offstage poor people. Even as Violetta leaves half of her meager money to the poor, we realize that the delicate touches highlight the virtue of the so-called “fallen” woman.  There’s a lot to see and learn from this lovely, lush, and heartfelt new Traviata. A masterpiece.