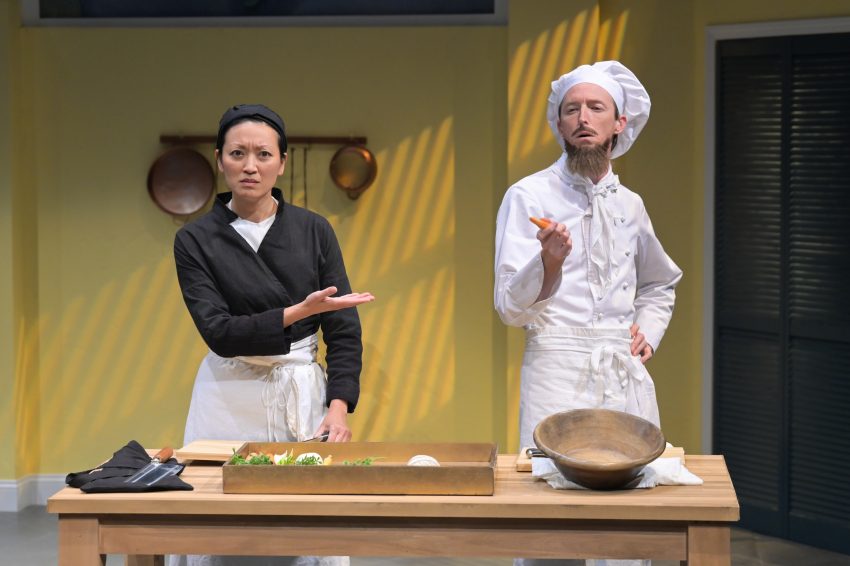 Travel with Dustin H. Chinn from French colonial Indochina to post-war capitalist Vietnam to foodie heaven Brooklyn. Catch the evolution of our tastes, our devotion to Pho, and our imperialist history.

We know we’re on a tour through time, when we see a resplendent French colonial, aristocratic lady in a costly green silk gown. She arrogantly gives orders to her bemused French chef and her clued-in Viet butler Nguyen (droll Anthony Doan) in French Indochina in 1889.

In this colonial setting, the French lady lords it over her superior but subservient chef, who sneers at her behind her back. We can feel the condescending attitude of Madame Gagnier (witty Elisa Beth Stebbins) and the sly winks of her long-suffering chef Guillaume (hilarious Joseph Patrick O’Malley).

When the chef tries to introduce a new food, thanks to the butler, the lady can’t handle it. Even when a brilliant Vietnamese cook named Thuy (noble Nicole Tung) comes to show them true Pho, they can’t handle her wisdom and authenticity—she’s too much reality for imperialists and colonialists alike!

In the second sketch, we are whisked to a post-Vietnam War marketplace in 1999, where brash placards advertise Pho for American tourists.

The ridiculous couple—in bright colors—apologize profusely for the American-led war in Vietnam. Their broken language and silly bows bring down the house. Stebbins and O’Malley make a great comedy team—replacing US aggression with US apologies.

But the self-conscious Americans fear the delightful concoction. They taste Pho tentatively, embellished with hearty herbs and spices they’ve never seen. As secret agents of the US fast food industry, their business plan blinds them to great, foreign tastes. Imperialism trumps taste.

Playwright Chinn whirls us through time to 2005 in Brooklyn, where Pho, itself, has undergone a third transformation. Pho has become a staple in chic Brooklyn—and hipster pretensions prevail.

Watch the enormous BLOW-UP when this new synthesis of capitalism turns Danielle into a furious Pho-Defender. Their dust-up is epic and worth the price of that Pho!

It’s done with broad strokes and over the top humor—worthy of “I Love Lucy.” Chinn uses Pho to wittily trace our journey from colonialism to capitalism to connoisseur-ship—through the humble soup. “Colonialism” delivers with tasty acting, delicious costumes, and three bowls of spicy revolutionary ideas that will rock your soup.