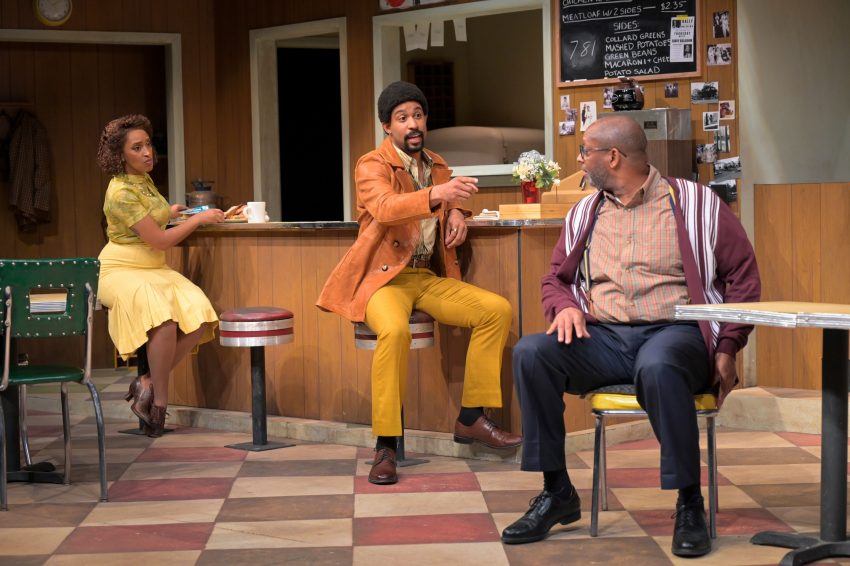 If you haven’t grown up either poor or Black or marginalized, then it’s hard to understand how powerfully those forces affect our opportunities. It takes a genius to make voter suppression and oppression emotional. August Wilson is that genius. And Director Dawn Monique Williams brings that train home.

Williams begins with a beautiful set of a 60s diner in Wilson’s Pittsburgh Hill District, where Century Cycle plays unfold.  At the “Home Style Diner,” we find a magnificent glass entry door that welcomes Wilson’s genial Hill District family. The big sign on the brick roof shouts: “We DEMAND Low Income Housing for the Lower Hill.”

In evocative 60s costumes and lilting dialect, the actors slip us back in time. Wilson shows Black citizens pitted against each other, while they accept white domination as “normal.” Each character is a distinct instrument in Williams’ symphony. Memphis (imposing Lamont Thompson) owns the diner. As a successful businessman, Memphis demands his rights in the face of white-controlled “urban renewal.”

Memphis takes out his anger on his independent-minded waitress Risa (pitch perfect Sam Jackson). But inventive Risa finds subtle ways to assert herself. Jackson perfectly embodies the walk and talk of a 60s woman in quiet rebellion. Her swagger says it all—like the men, we are mesmerized by her moves.

Risa is a powerful 60s goddess whose look brings joy. Among her worshippers, the imaginative, young con man Sterling (enchanting Eddie Ewell) spins his dreams. Never at loss for a gig to make two bucks, Ewell fashions Sterling into the new Black artist who never loses hope and is always reinventing himself.

Kenny Scott delivers a detailed look at Wolf, a numbers gambler, who tries to make the diner his office. Even his off-hand glances tell a story—slickly dressed and bouncing walk betray his fragile confidence. Scott makes him a performer who hasn’t been offered a free ride at Harvard yet. It’s the 60s, remember, and transformation is a dream—like winning the Lotto.

The Devil of The Hill District, dressed all in black with black gloves, the fastidious West, the local undertaker (implacable Khary L. Moye). Feared and oddly respected, West looks down on his fellows, hoping to amass more bucks.

Director Williams’ symphony of souls has one more genius, the disturbed obsessive Hambone (superb Michael Wayne Rice). Rice’s Hambone drills us with his insistent quest for a real ham-bone. But young Sterling teaches him that “Black Is Beautiful,” replacing obsession with hope.

Each character travels along unpredictable paths. We can feel the big changes on the way. As I listen to their rhythmic riffs, I sense they will hold onto each other’s talents and make change happen. Bravo! August Wilson and Dawn Monique Williams!