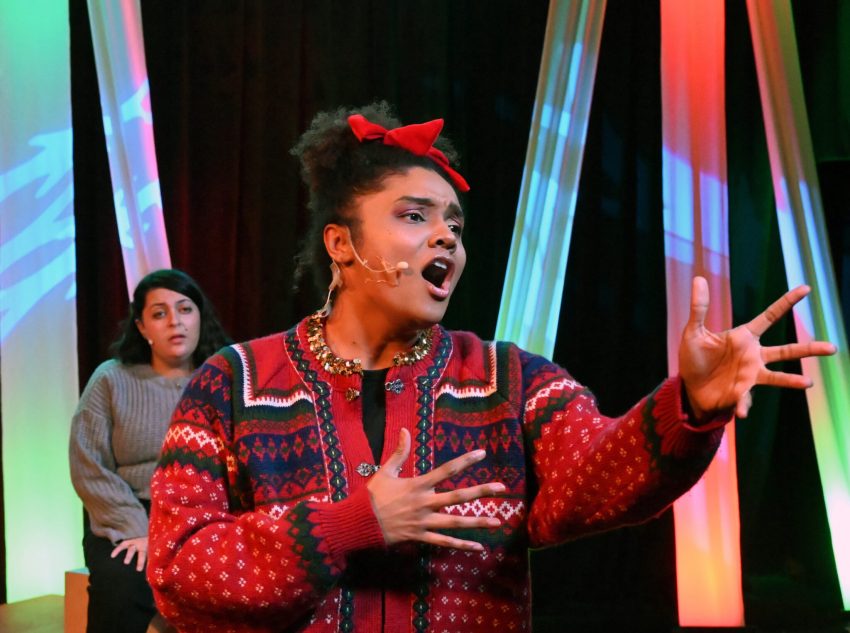 “Shoshana in December,” a musical potpourri, follows a young Jewish woman questioning life, love, and sex, prompted by December’s so-called “holiday spirit.” She wants to find the warmth of that spirit in herself, and feel more alive.

Shy Shoshana (Lena Sibony) hates Christmas. She greets us wearing an overcoat and scarf. We see a sweet, confused lady who speaks fast and feels frozen—yes, in San Francisco. “Snow,” she reminds us, “is just a feeling.”

Should she enter into the world of Christmas, or stay rooted in her Judaism? Should she explore love outside of her gregarious, but self-involved boyfriend? She sings, “If I stay frozen, not picking a side, / I don’t have to hurt, don’t have to decide.”

This is a deep conflict for many Jews, but especially for those with mixed marriages or partnership. The feeling and meaning of Hanukkah, the Jews fleeing from terror and atrocities, is the opposite of celebrating the birth of a new religious savior.

The holiday spirit Shoshana is hoping for is just not happening. Her “I made you chicken soup,” caring Jewish mother Rebecca (Sara Felder) dislikes the Christmas brain-washing. But the three create a happy, spirited Hanukkah song that Rebecca, Shoshana, and Danny sing in Hebrew. The song takes a comic twist when they add their own playful lyrics in English. Their joy touches us.

Although there are a few deadpan clichés, Shoshana on the plane to L.A. is one of the funniest. She hears an over-emotional talker (John Mannion) yelling into his iPhone to a date he has never met: “I’ll get you out. Stay Strong!”

The scene at Cecily’s house is mostly silly, especially the tree trimming. Although Cecily’s sexy, straight mom, powerful Elaine (Stephanie Rae Wilborn) welcomes Shoshana, religious issues arise again. Shoshana feels uneasy in a Christian home. Even talking about being Jewish unnerves her: “I’m most Jewish when I have to fight for it.”

Director Vanessa Flores has a flair for bringing out essential qualities of each character, enhancing their humor.

Torn between monogamy and polyamory, Shoshana again falls into conflict: Jew/Christian, Christmas/Hanukkah, Monogamy/Polyamory? How can she balance her world?

All in all, the play is a roller coaster ride where sometimes we lose sight of a destination.  Playwright Oser touches serious issues, yet skirts away from them. Her play is humorous, silly, somber, and thought provoking. We are left with real questions and a happy ending.