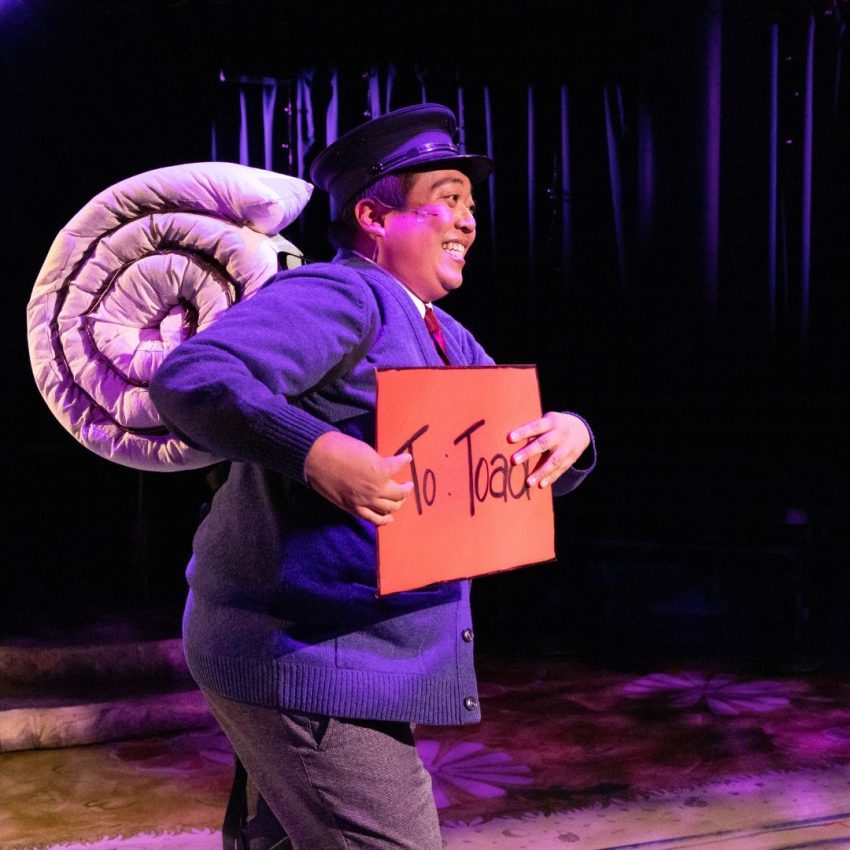 My kids noticed it before I did.  All along the edge of the stage, in front of the front row, a row of small lily pad pillows.

I looked around and shrugged.  “Yeah, I think so.

And sure enough, we were separated from the start.  This is one of the things Bay Area Children’s Theatre always does well—finds ways to make the experience magical and special for kids.  There they were, right in the action of the play—the characters looking at and interacting with them throughout.

The highlight of this show is the hilarious and nuanced performance of Juan Castro as Toad.  Irreverent and neurotic, Toad relies on Frog, the multifaceted Alexandra Rivers, for support and a rosier take on life.  Like their last show, “Elephant and Piggie,” BACT seems devoted to exploring the challenges friends face, and how adversity is conquered together, despite the different species. 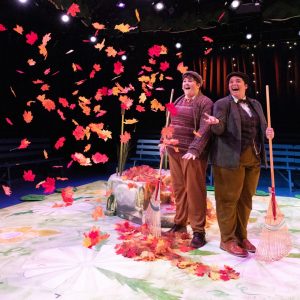 Under the direction of Anthony A. Jackson, these two characters’ funny and conflict-peppered chemistry forms the heart of the show, driving a series of episodes that take place over a year, from hibernation-up to hibernation-down.

It’s a musical in a woodland, with birds and a snail—Snail slowly, over the course of the show, delivering a letter to Toad from Frog to brighten his day. And the Birds—costumed cleverly as pilots—mark the beginning of spring with their arrival and the end of fall with their departure.

A stand-out scene has Frog and Toad swimming in their pond, Toad feeling self-conscious about looking funny in his bathing suit.  They tease him, and cajole him out of the water.  In a scene where he could be humiliated, he’s able to laugh it off and conquer his insecurity. 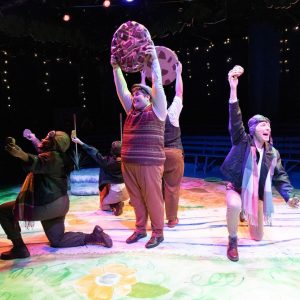 Sometimes, kids’ shows seem hesitant to go there, to enter the troubled waters that punctuate childhood friendships—situations in which friends act badly and someone who is vulnerable could be embarrassed and ostracized.  So, I commend Jackson for diving deep, showing us how Toad rises to the occasion and overcomes his self-doubt about his body—a strong message to send to young kids.

Dazzled and wide-eyed, my kids, Itasca and River, jumped off their lily pads after the show.  Their favorite part?  “The cookies!” they both said in unison, referring to a scene where Frog and Toad bake.  I rolled my eyes, but what better way for a little Toad to celebrate overcoming body shaming than with a cookie, right?

“A Year with Frog and Toad” is the perfect complement to the holidays.  Bring some music, friendship, and woodland adventure into your life at BACT before it’s all sold out.

“A Year with Frog and Toad”—book & lyrics by Willie Reale, based on the books by Arnold Lobel, music by Robert Reale, directed by Anthony A. Jackson, by Bay Area Children’s Theater, 2055 Center Street, Berkeley & Fort Mason, San Francisco. Info: BayAreaChildren’sTheatre – to January 23, 2023.