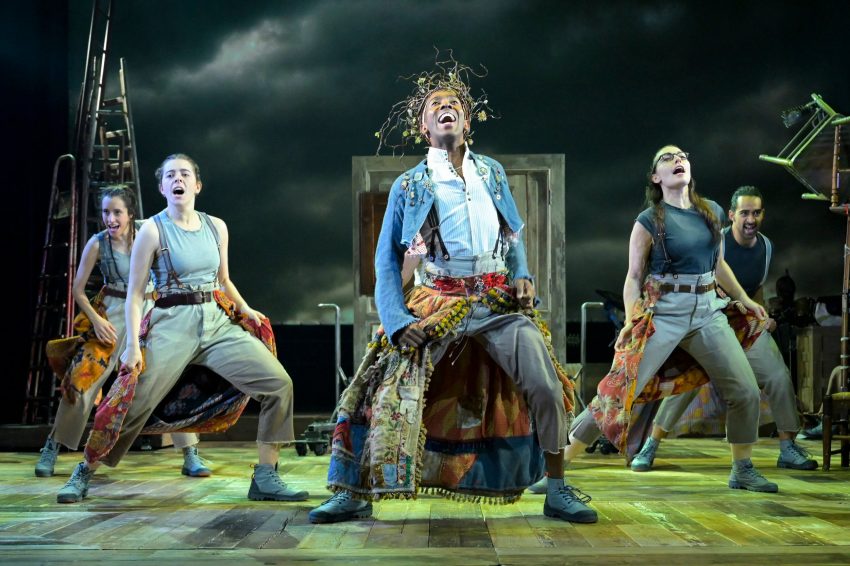 Everything about the first act of Emma Rice’s “Wuthering Heights” is physical and passionate and dark as a Grimm’s fairy tale. As the story unfolds, actors playing the Yorkshire Moors, ominously sing: “What you sow, you will reap.”

Costume Designer Vicki Mortimer dresses the chorus of human Moors in fanciful skirted costumes—the perfect embellishment for their rhythmic dances that underscore the action. You can almost hear the swish of the fabric. The music is like a strain of back country Appalachian dance tunes with rolling percussion and strings punctuated by plenty of foot stomping.

Charismatic Jordan Laviniere, the leader of the Moors, wears a striking crown of leaves and twigs. Graceful Laviniere sometimes leans into our moody hero Heathcliff to advise him.

But it’s always about the family. Any psychologist today could spot the signs of dysfunction in brooding Heathcliff and wild Catherine who have grown up together. As children, they are portrayed by folk art style puppets manipulated by actors. Frightening dog’s head puppets bark and bite at the end of a rod. The Earnshaw family, landed gentry on the ghostly moors, are bitter and resentful.

And the family connections? It’s complicated.

Wealthy Mr. Earnshaw (dignified Lloyd Gorman) finds Heathcliff, a foundling, a poverty-stricken child on the Liverpool docks. We know only that he is “Other”: Foreign, dark and  brutalized. Clearly, Heathcliff stands for a new and rising force in Britain. Catherine (rock n’roll Leah Brotherhead) adores Heathcliff, but he is beaten up, repeatedly, by her brother, Hareton (multi-talented Tama Phethean).

The atmosphere is dark around Heathcliff (intriguing Liame Tamne) and we sense revenge coming. Tamne embodies Heathcliff’s brooding, angry self in his elegant frock coat, threatening anyone who challenges him.

Building facades roll on and off on wheels. When confused Mr. Lockwood (brilliant Sam Archer) pays a call on his landlord Heathcliff in a raging storm, we are treated to an amazing comic pantomime. While the human Moors create the wind and sound, Lockwood is comically blown horizontally. See it to believe it.

Leah Brotherhead’s wild child Catherine is over the top with her raving for Heathcliff: “Heathcliff is more myself than I am.” She and Heathcliff just do not fit into the English class culture. Their crazy, symbiotic, mixed-up love reflects the conflicts of old wealth and new.

In contrast, Act Two bursts with sunny days of hope. As Heathcliff and Catherine haunt the stage, the next generation’s Young Cathy and Hareton (charming Eleanor Sutton and Tama Phethean) happily set up house. These comic turns take us from darkness to much-needed light and laughter.