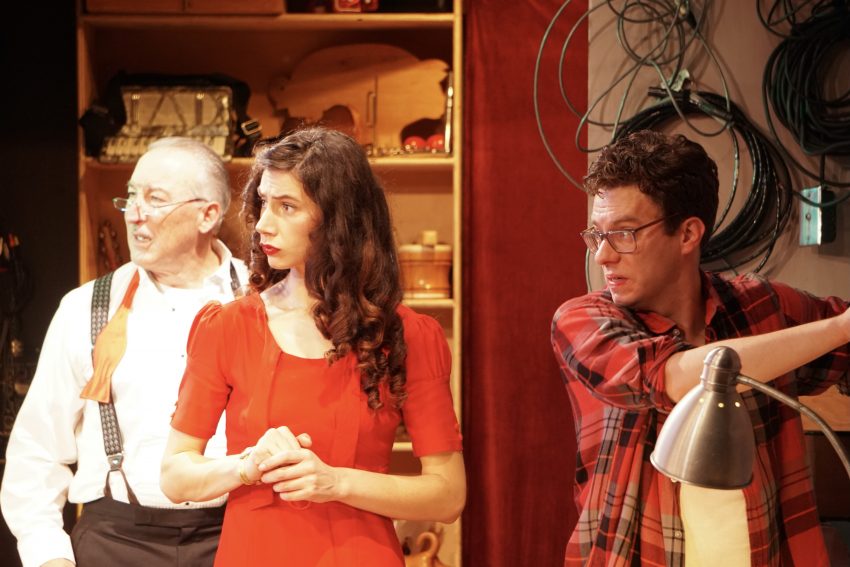 Did you ever feel as though you were having one of those days, where nothing seems to be going your way? And the outcome feels like it will be a farce? Then, when you look back at the day, you survived, and well, things worked out, against all odds, and in unexpected ways.

Welcome to “Ham for the Holidays, A Merry Little Farce” by Shad Willingham. You may not relate to the events of this hilarious play, but it will touch feelings of a similar day.

The play unfolds at WHAM (pronounced W-HAM) radio station in the fictional town of Hamlin, Georgia, on December 24th, 1939—a day they did not expect snow. But, yes, the snow fell, the first one in many, many years.

The radio team is awaiting the arrival of the great director Orson Welles, who will recite his new Biblical play “The Greatest Hits of the Bible” on Christmas eve. They have advertised it throughout the small town and beyond.

As may be expected, Welles is stuck because of the snowfall and cannot make it. But they have his script in the mail—or think they do. Insecure Timmy (skillful Zane Walters), a go-fer and sound assistant, has mixed up two red packages. The mailman, Sam Wainwright (zany Keene Hudson), delivers a fruitcake instead of the script.

Cab Hoxton, owner, and a sponsor of the radio station is in a frenzy. He often inverts words and phrases in spoonerisms, but then, catches himself. Cab’s daughter, giddy Honey (versatile Dale Lionheart), is described by her dad as a “porcupine in a rubber raft.” She constantly misinterprets her father’s requests.

What fun it is to ride the airwaves of their speedy solution to the missing script. Stuffy, snobbish writer Dexter Armstrong (Garet Waterhouse) hoped to get Welles to read his play for a possible production.

With ten minutes to spare before airtime, they grab Dexter’s hand-written play “Attack of the Space Robots from Outer Space” to read on the air!  Dexter’s play mimics Welles’ “War of the Worlds,” which created riots a year earlier because listeners believed it was real.

Dexter bickers with sensible Violet (Maureen O’Neill), claiming, “I am like the wind, unknowable.” Violet responds, “You are the broken wind, unbreathable.”

Playwright Willingham’s dialogue is clever, with fast and sharp exchanges. Adding to the humor, Cab and the staff advertise Hoxton Hams—yes, great for the holiday meal.

It is a pleasure to see a play that is pure fun for the holidays, with the added insight into our own rollercoaster days. “Ham for the Holidays” brings us the light-hearted fare we need in these times. Come and enjoy,

I laughed with my heart. A Must See.