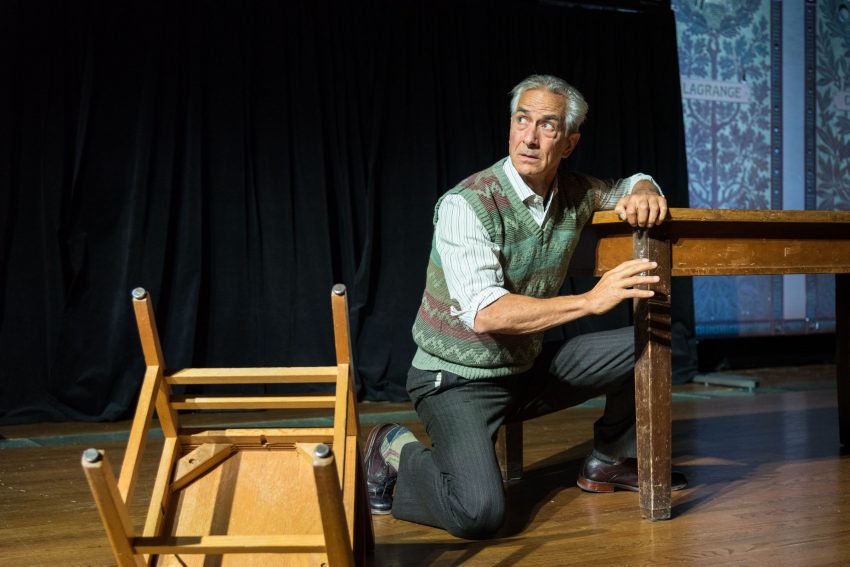 In a brilliant one man show, David Strathairn dramatizes the story of Jan Karski, a young Polish Catholic diplomat during the Holocaust. Karski struggled to tell the outside world what was happening in the Warsaw Ghetto and in the Death Camps—horrors he saw with his own eyes.

Karski, who calls himself “an insignificant man,” alerts us to remember those who have witnessed unspeakable acts and to tell our own stories, too.

Film and stage virtuoso Strathairn masterfully embodies Karski, visibly carrying intolerable secrets on his heroic shoulders. As a Polish non-Jew, Karski was charged with reporting on the Ghetto. His eyewitness accounts of the treatment of the Jews only became known decades after WWII, when he was sought out for his testimony.

Even as a Catholic and a diplomat, leaders will not believe him. Officials turn away, change the subject, or outright deny his facts. After the war, Karski remains silent for 35 years. Claude Lanzmann, the director of SHOAH, interviewed Karski for his essential movie on the Holocaust. By the time he speaks, the world had begun to forget.

After the war, he became a Georgetown professor and remained largely silent about his wartime reportage until the early 1980s. “I report what I see,” Karski repeats, “I am a camera… I saw it and it is the truth.”

The set—a table, a chair, a square platform—stand for the tortured world. Strathairn paces the contours of the square like a caged man, describing his encounters with Jews who are near-death with a fearful pathos.

One moment he is flinging his body from the table when recalling a leap from a tall building; the next he is being interrogated and tortured in a dark room. Then he recounts meetings with Anthony Eden, Franklin Delano Roosevelt, and Felix Frankfurter. In each scene, Zach Blane’s extraordinary dramatic lighting amplifies the suspense of his mission.

Karski has seen a hellish world: He saw how Jews suffer unspeakably in the Ghetto, moving like zombies in unison, humans reduced to depravity. He sees filth and death and horror all around him.

He sees the death camps—and he tells us about people who saved him from death, only to be murdered themselves. The shock of the camps renders his mind “unable to absorb that it is real.”

Director Derek Goldman turns Karski’s message to us: What is our responsibility in the face of injustice? Karski’s heroic efforts teach us that humans have an infinite capacity to ignore horrors. As photos from the war play behind him, Strathairn pays homage to a simple, honest man. A dramatic triumph.

We must never forget. Remembering the Holocaust, Karski tells us to “Remember” what we see. Each of us must remember and defend against atrocities—a timely lesson as war rages again in Ukraine. It’s the least we can do to make sure that history does not repeat itself. A sincere standing ovation burst from the audience in tribute.

“Remember This: The Lesson of Jan Karski” by Clark Young & Derek Goldman, directed by Derek Goldman, by The Laboratory for Global Performance & Politics, at Berkeley Repertory Theater. Info: BerkeleyRep.org – to December 18, 2022.