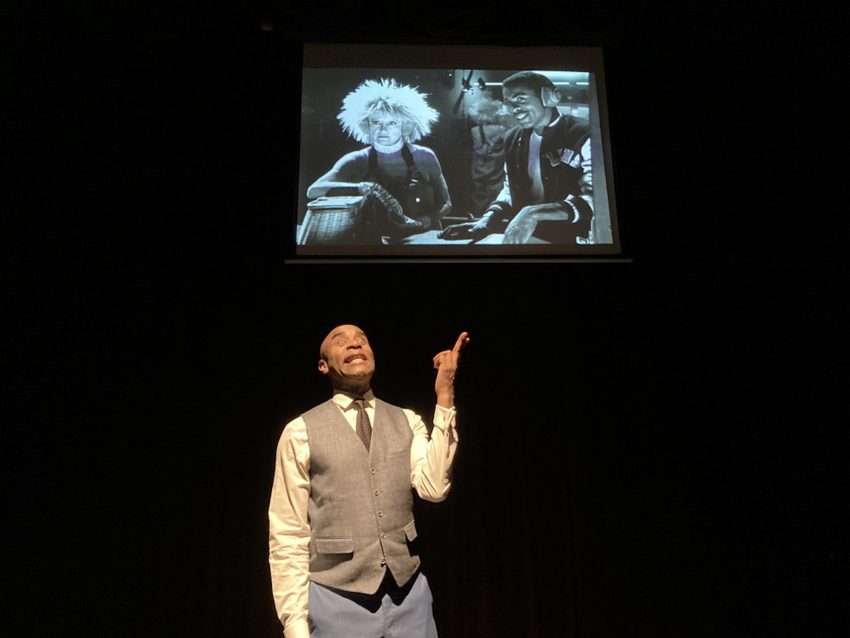 If you’ve never seen a Don Reed stand-up show, now is the time for a rare treat. Don Reed has come home to the East Bay from Hollywood, and he’s got lots to tell us about how it rolls down there. His imitations of Sammy Davis, Jr., Johnny Carson, Spike Lee, and Don Cheadle pull back the curtain on the movie and TV biz.

Reed, an Oakland native, came up through Oakland schools and devoted teachers who encouraged him. He surprised himself by getting into UCLA and working odd jobs. For a while he was homeless and camped out in the dorms. but he persists–that’s part of his genius.

As a kid, they called him “Blinkie” because of his many tics. So, he turned those tics into entertainment for family and friends. He absorbs rejection and turns it into gold, many times. Reed’s Oakland family forms an affectionate backdrop to his career. He gives us insights into what it was like to come up in Oakland—the dances, the styles, the music. He chronicles the story of getting up and out, but never abandoning his roots. Reed does it all with charm, wit, and smooth dance moves.

The first time he did stand-up—at The Punchline in San Francisco—it left him an emotional mess. But Don persists and gets himself on screens in Hollywood, proving again that “It’s Never Too Late.”

After decades in Hollywood, Reed proved himself as stand-up comic, actor, writer, director, and producer. Now, he’s launching a talk show based in Oakland—called, yes, “The Never Too Late Show”! Don Reed’s new show will help to clear the air on cultural and racial issues that float around the Bay.

At The Marsh, Berkeley, Reed hits the mark, commanding the stage with hilarious moves, surprising insights, and memorable videos. We feel comfortable and embraced in his showman presence. We feel like he’s talking to us—a unique gift. Reed’s show is based on Black life in Oakland, the struggles of a newcomer to Hollywood, and the influence of great stars he has worked with in L.A. It’s an outsider’s story from the inside. Irresistible.

When Don Reed tells the story of waiting for his agent to get him on The Johnny Carson show, we hold our breaths to see if he will achieve his lifelong dream as a comedian. When Don Reed tells us what words of wisdom that Sammy Davis, Jr. whispered in ear, we all lean over to hear.

So many great stories, sweet moves, and undreamed-of successes for a boy from Oakland. This is a show that raises all spirits. Don’t miss Don Reed. And soon we’ll get to hear the wit and wisdom of Don Reed on a talk show from Oakland, proving again that “it’s never too late” to find your dream.

“The Never Too Late Show” – written, performed, and directed by Don Reed, produced by Don Reed & Pat Hazell, at The Marsh, Berkeley. Info: The Marsh.org – to February 19, 2023.

Cast: Don Reed (as himself & many others)