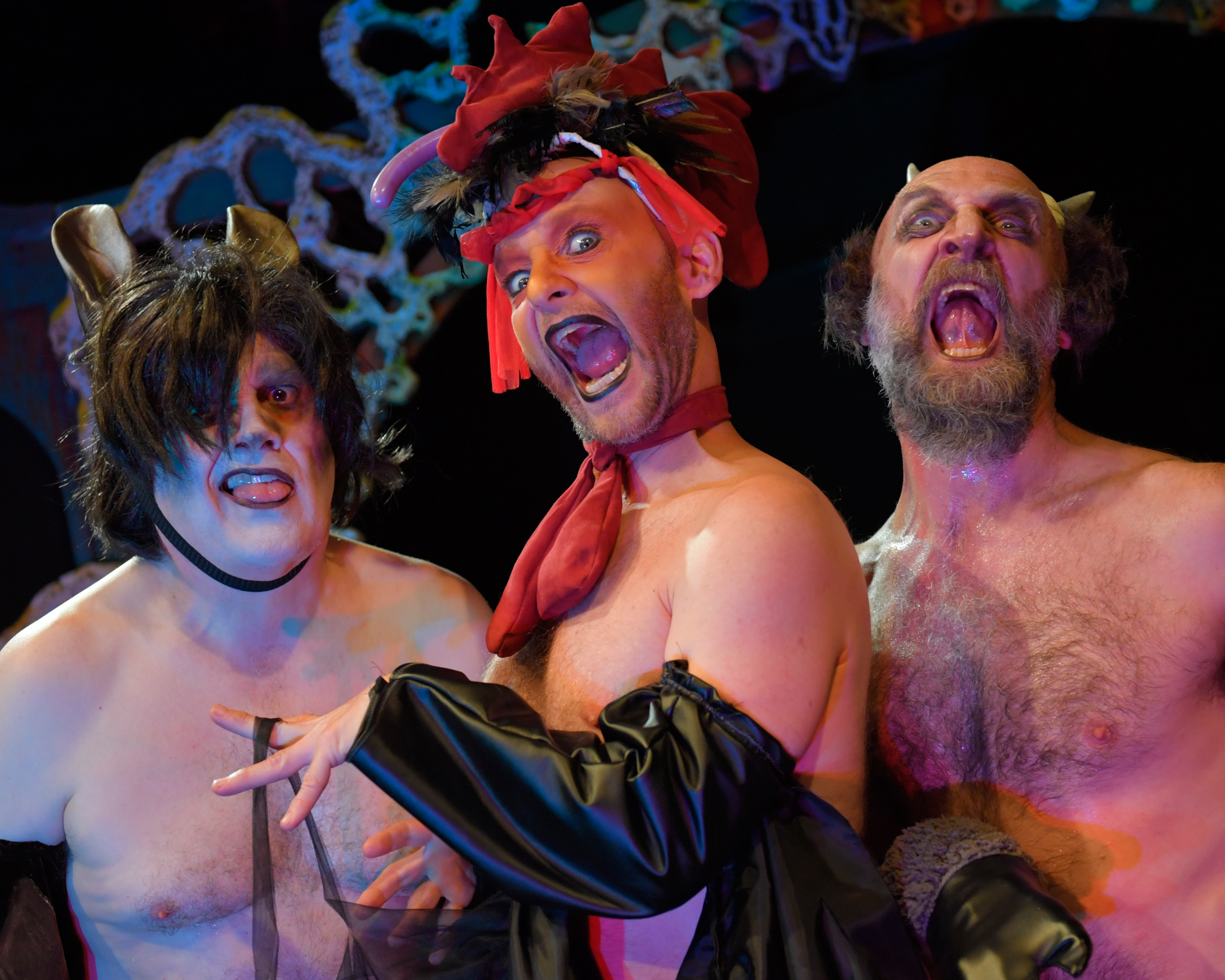 Blood and Butts Thrill with Vintage Flair at Hypnodrome

Thrillpeddlers’ “Shocktoberfest 17: Pyramid of Freaks” offers a fantasy feast for the senses. Creative Director Russell Blackwood and his team put on a glorious five-part spectacle in the tradition of Grand Guignol, the early 20th century Parisian theater movement infamous for portraying sex and violence—with plenty of blood. Shocktoberfest promises to thrill pagans, deviants, and everyone willing to have a damned, depraved good time.

The hard-working actors, musicians, and crew of Thrillpeddlers juggle multiple roles and lightning-fast scene changes, while they spew blood and guts galore. And they do it with contagious energy and demonically happy grins on their faces.

Actor, musician, musical director, and force of nature John Flaw, working with the musical group Vagabondage, plays the audience into the house—leading a four-piece group of guitar, fiddle, upright bass, and accordion, Vagabondage’s old timey, jaunty tunes set the mood and lead us right into the the night’s first delight.

“The Haunted House,” written by Frenchman Marc Bonis-Charancle in 1903, was originally performed in French at Le Théâtre du Grand-Guignol. The cast of this English translation, wearing late Victorian garb, draws us back to a time when this creepy and bloody performance would make patrons faint with shock and vomit in horror. Five aristocrats sneak into an old house they believe is abandoned, and filled with rumors of murders and ghosts. James Jeske, invigorating as the enraged homeowner Fulbert, enters in an ornate and tattered bathrobe. Natalie Demchenko performs enigmatically as his captive wife Genevieve. She enters crazy, bloodstained, and spinning–filling the room with tension and curiosity. The others cower and gasp at the ensuing quarrel. Zelda Koznofski plays Mrs. Ravan, clutching her pearls with fear, worthy of a DeMille close-up.

Next, Crystal Why sings a cabaret-style song called “Mister.” Wearing a full-length orange coat with a long string of pearls, she brandishes an unmarked bottle of hooch. Why’s charming performance enchants and amuses, and the booze leads us, thematically, into William Selby’s “The Hellgrammite Method.”

“Hellgramite,” originally an episode from the 1980’s Twilight Zone, feels polished to a shine with its made-for-TV three-act format and perfectly circular plot. Dan Foley makes a superb drunk as Miley Judson, and plenty of creative staging and projections ease the transition from television screen to live theater. CJ Smith plays Dr. Eugene Maddox, inventor of the titular method for helping people beat their alcohol addiction, and sends chills through the audience as he proclaims that once you start his method, “There is no going back.” For an added bonus, the play ends with a few brief moments of masterful physical comedy by Culpability Brown playing a shaking, sodden drunk trying in vain to light a cigarette.

The title play, “Pyramid of Freaks,” closes the night with an entertaining noir turned backward. Instead of the stoic hero, Dan Foley plays a detective who becomes a loser narc-antagonist out to ruin all the fun. Bicha shines again as Tozzini, a showstopping circus strongman and closeted cannibalistic murderer. The cast of other freaks even includes some adorably dangerous dog-human hybrids and Alligator Boy, played by Eric Johnson, wearing a green alligator skin biker jacket complete with a tail. In case anyone in the audience hasn’t yet had their fill by this point, “Pyramid of Freaks” has even more to satisfy your grandest appetite for blood and gore.