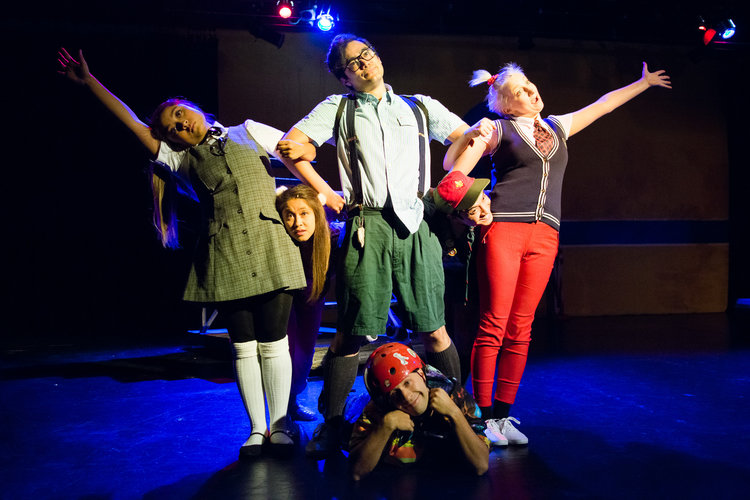 “The 25th Annual Putnam County Spelling Bee” (2005) remains a side-splitting, fresh, and endearing comedy about what winning really means. The cast belts out tunes about magical feet, erections, and gay parenting. Filled with slow-motion and fast-forward action, improvisation and audience involvement, the opening production of the second season of Bay Area Musicals at the Alcazar Theater surprises and delights.

Six teen students vie for the Putnam County Spelling Bee trophy, each exhibiting an awkward trait of adolescence. Leaf Coneybear (the lively David Glazer) is the aloof, roller-skating kid with a mohawk-fro and an erratic presence, even after being eliminated early. Marcy Park (the somber Catrina Manahan) fills the role of an over- achieving Asian girl who speaks six languages. Marcy sleeps only three hours a night, but she disdains her achievements.

Chip Tolentino (the vibrant Antonio Rodriguez III),  an Eagle scout, wins every competition, except when his erection rises up. Logainne Schwartzandgrubenierre (the assertive Cecily Schmidt) bears the burden of being the daughter of two fathers. At ten years old, she is the lisping founder of the first Gay-Straight-Alliance at her elementary school.

William Barfee (the agile Nick Rodrigues) has an unfortunately spelled last name and a magical foot that spells out letters on the floor. What more could you ask for?

Alexa Ortega is cute as a button and perfect as Olive Ostrovsky, a sweet but lonely child of two apathetic parents, whose only friend is her dictionary. In pink overalls and glitter jelly shoes, she sings with a sweet, crisp voice, Ortega wins the ever-pretentious William’s heart—and ours—by the end of the play. Though she places second to William, she is graciously given an ad-hoc runner-up prize of $25 from the Vice-Principal’s own wallet, which just happens to cover her competition entry fee.

But his apparent infatuation with Ms. Peretti remains unclear, until we find out she has requested a restraining order against him. Mitch Mahoney (Lavale Davis) plays the criminal on parole, whose responsibility it is to console the losers with a juice box and a hug as part of his community service.

The versatile cast masters all the elements of comedy, nailing it every time. As the contestants take their turns at spelling, the action speeds up and their movements blur into high pitched squeals. We feel like we are watching at five times speed.

Then all of a sudden, we have pressed the slow motion button. Olive finishes the last two letters of her word in a slow, deep voice, while William’s foot is raised halfway in the air during his spelling jig. Leaf defies gravity, slowly toppling backward, as the others reach out to break his fall. The contrast in pacing breaks up the audience!

We are literally engaged in the show, when four audience members are asked to come on stage and participate as contestants in the spelling bee. We are drawn into the action, and clap wildly whenever someone, successfully or unsuccessfully, finishes spelling a word. Even after failure, the ridiculous send off lyrics of “You were good, but not good enough” manage to bring a smile to everyone’s face.

Matthew McCoy does a fantastic job with overall direction and choreography. Changes in lighting are effective for distinguishing the flashbacks and daydreams of each character. As William recalls his last brush with death at the spelling microphone, the lights fade and illuminate the stage in a dark blue. William squeamishly screams, “Were peanuts in the brownies!?” as he wheezes uncontrollably from his severe peanut allergy.

The lights suddenly turn bright again, and William stands stoic at the microphone, prepared to foot spell his next word. During other flashbacks, the actors spin the bleachers, chair, and desk to create a Twilight Zone feeling. These subtle and provocative elements enhance every scene.

Jon Gallo conducts the lively orchestra, which consists of two keyboards, reeds, a cello, and percussion that sit onstage. Even Gallo gets pulled into the action, when Marcy takes over the piano while listing her achievements as a child prodigy in “I Speak Six Languages.” The orchestra, vocals, and choreography mesh smoothly, no small feat considering all the frenzied action.

Though there can only be one winner at The Putnam County Spelling Bee, even those who do not “win” learn something new about themselves. Whether they become gracious, build relations, accept themselves–or just keep trying, the competition means more than a trophy. It’s about more than winning–back there in 2005, in the doldrums of Bush’s ill-conceived Iraq invasion. As the kids from “The 25th Annual Putnam County Spelling Bee” tell us: “Life is random and unfair…life is pandemonium.”  They offer a small and local tonic to a world gone off the rails.