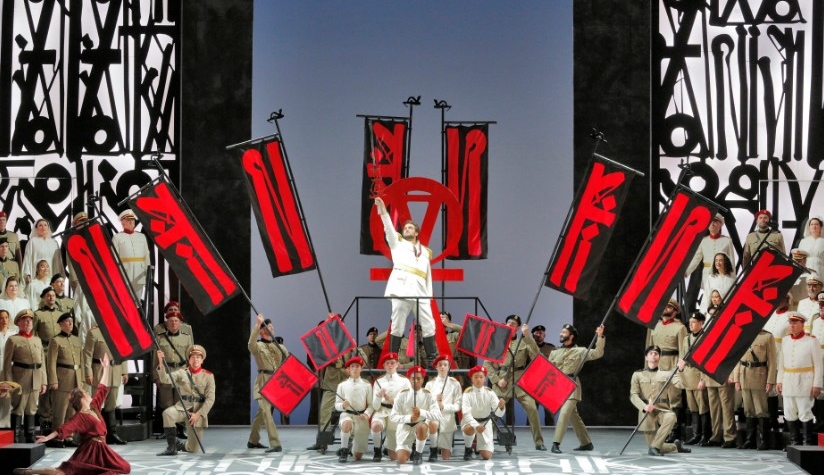 Director Francesca Zambello exchanges Verdi’s 1871 Egyptian setting for a modern, graffiti design by Los Angeles street artist RETNA (Marquis Duriel Lewis) and set designer Michael Yeargan. Zambello opts for a slashing, red hieroglyphic inspired design that suggests 1984 style oppression. She changes the enemy from Ethiopians to “foreigners” and Aida becomes a foreign “prisoner.” By widening the historical meaning, she is appealing to a younger audience. Zambello looks beyond earlier racial and cultural tokenism, and opts instead for a stirring imperial/colonial epic.

As Aida, Crocetto articulates with clarity and emotion. Her voice is striking and resilient, moving us with her soaring arias rather than with physical movement. Crocetto’s Aida evokes our compassion by remaining reserved amidst a visually elaborate and adventurous production.

As Radames, Brian Jagde’s resonant tones well illustrate his competing roles as valiant warrior and vulnerable lover. As Aida’s father Amonasro, baritone George Gagnidze elevates the part of the captured enemy King. Dressed in a dusty green prisoner’s uniform, his patriotism betrays his royalty, and we fear for his fate. Verdi highlights the Amonastro’s struggle between loyalty to his country and love for his daughter. In a nostalgic “O patria mia,” an oboe mournfully accompanies the anguish-stricken Aida. Verdi focuses us on the individual anguish in an intolerable regime.

In the dance scenes, Jessica Lang, uses drab uniforms reminiscent of the World Wars, to present chaotic dances in a military “fog of war.” 123 people participate in the Triumphal Scene, along with 78 off-stage orchestra musicians, to ring Aida to epic grandeur.

Bass Anthony Reed, an Adler scholar, commands as a youthful King of Egypt. The grand Triumphal march combines many elements, dance, vocal, visual, alerting us to the complexities of authoritarian rule. The modern setting uses its fascist symbols to serve as a warning for the present day.
The King presides over the sensuous symbolism of a lone ballerina (Rachel Speidel Little) in a flowing white and gold robe. She captures our focus, depicting the plight of women in the wars. Her unspoken terror turns into joy as she leaps in celebration to welcome the returning and victorious Radames. The dancer contrasts with the dispirited Aida, a foreign slave in this harsh country.

Mezzo-soprano Ekaterina Semenchuk shines as the arrogant Princess Amneris, whose unrequited love for Radames leads her to oppress and plot against Aida. Her flowing yellow robe with crystal accents and brilliant diamond tiara accent her power and possessiveness. Her lower, velvety voice signifies her scheming, in contrast to Aida’s bright soprano.

During the dramatically excellent “Già i Sacerdoti adunansi,” Amneris tries persuading Radames to give up Aida. She pleads, “Renounce her forever and you shall live.” We feel Amneris’s selfish love, as Semenchuk moves us to comprehend even Amneris’s heartbreak. Verdi humanizes even the doubtful characters, who are trapped by arrogant rigidty.

Nicola Luisotti expertly directs the San Francisco Opera Orchestra, with the strings in crescendo punctuating the negotiations between Radames and Amneris. The music elevates the urgency and danger of the scene. Musical triplets pepper the production, a coy reference to these complex relationships.

Radames stands in front of priests, all cloaked in black, in hoods suggesting medieval executioners. We are transported back to the future in this tyrannical fantasy. Amneris grasps hopelessly at the black ribbons that keep her from reaching Radames. Verdi also reveals his contempt for the Church, as Amneris’s cries condemn the hypocritical priests as “thirsty for blood.”

“Aida” exposes the social components of each character’s suffering, in an impenetrable and Kafka-esque world. A co-production with Washington National Opera, Seattle Opera, and Minnesota Opera, Verdi’s question carries weight for today. How can we oppose an elite, military urge and bring triumph to those people who are suffering?