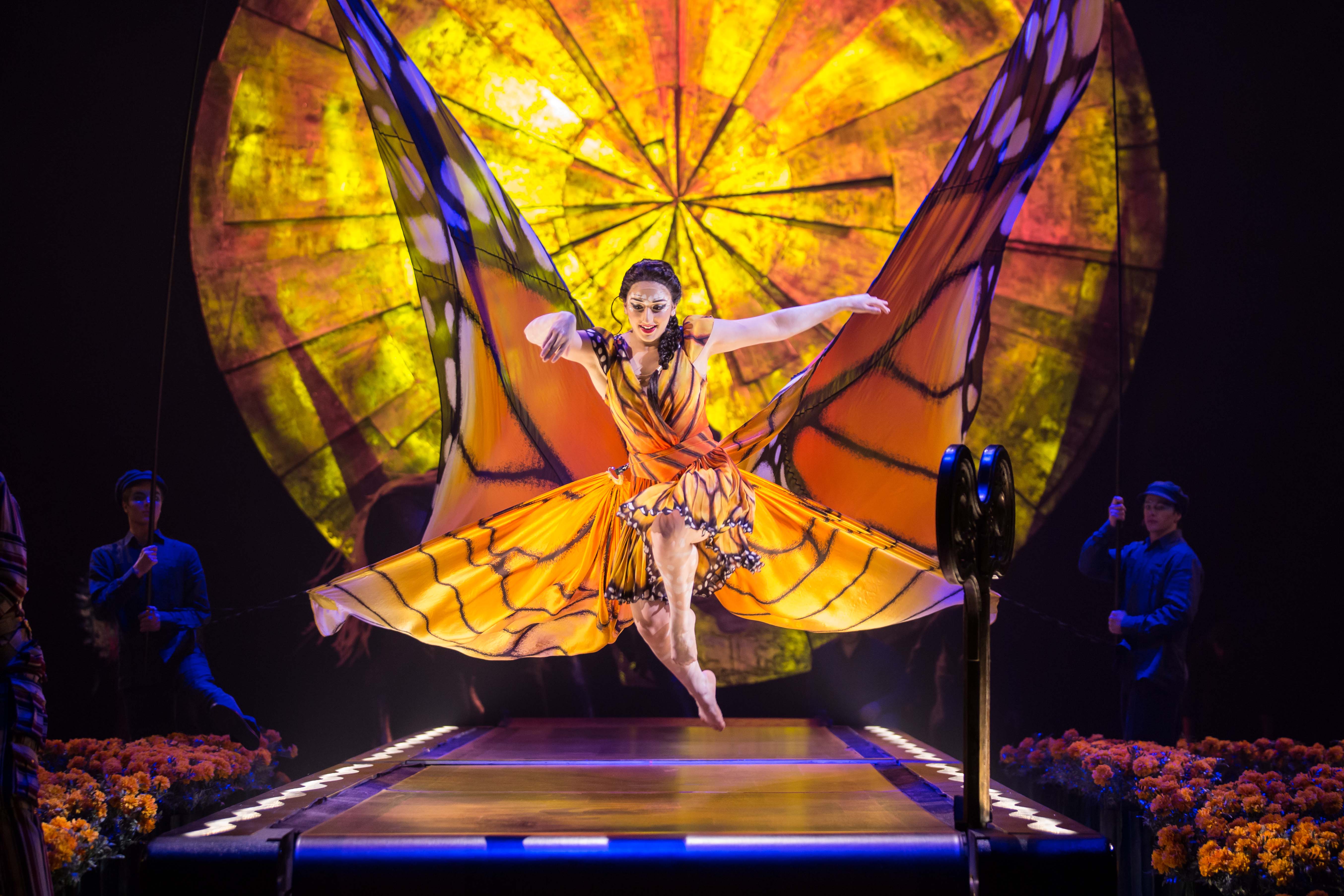 Cirque du Soleil unleashes a torrential downpour of physical feats and Latin delights with the U.S. Premiere of “Luzia: A Waking Dream of Mexico.” With an international cast of 44 performers and a $47 million investment by Mexico, “Luzia” integrates incarnations of water in pools, showers, and patterned waterfalls. “Luzia” enchants under Le Grand Chapiteau at AT&T Park in San Francisco by blending traditional and mythical Mexico in a spectacular dream for a spellbound audience.

From life-size dancing cockroaches to desert cacti on the ocean floor, “Luzia” paints a surreal and magical Mexico. Spanish dialogue, music, and lyrics accompany the “electro-pop” and mariachi-inspired band of crocodiles, a notable departure from Cirque du Soleil’s tradition of using its signature invented language. We see a deliberate attempt to bring respect and awareness to Hispanic culture, an endeavor all the more pressing after the tumultuous election season. Eric “Fool” Koller opens the show by twisting a giant toy wind-up key, and he guides us comically, throughout. He shrilly commands the audience with a whistle and aimlessly throws around with a beach ball. Then he tries to gather falling water into his drinking bottle. As a jester who distracts the crowd during set changes, he endears himself with his genuine curiosity and comedy.

Like other Cirque du Soleil extravganzas, “Luzia” excels by transforming the everyday into the extraordinary. During the “Football Dance” show, Laura Biondo and Abou Troaré don jerseys and masterfully maneuver a traditional soccer ball. What starts as simple dribbling turns into a magnificent breakdance competition. Though they represent competing teams, they also share the ball and even hold each other in the air. The couple transports us to muddy sports practices from our childhood, where the pleasure of play outweighs the urge to win.

A nine-year-old girl in the back row stands up and stares with her mouth wide open, transfixed, in awe at the spectacles. In her dreams and ours, a new Mexico breaks free from political baggage and stereotypes. We mirror her wonder and  bask in the dream of a conflict-free world.

A strong second half highlights the best in acrobatics, leaving behind the cultural references. Aleksei Goloborodko’s incredible contortions amaze and petrify us. Balanced on one arm, his feet raised in the air, he lowers his body down to rest on his shoulders. Somehow he maintains a cheerful and radiant smile during his grueling act. As in a horror movie, we are torn between fascination and fear as he bends so far backward that his spine seems to bend and disappear!

“Swing to Swing” exemplifies the skill, teamwork and poise that make Cirque du Soleil so spectacular. Men and women in white costumes, painted with cerulean and red flowers, leap and flip from one huge swing to another, high in the air. Team members position the swings with impeccable timing to magically catch each acrobat. We sit motionless and transfixed, with occasional gasps escaping our lips. Mexican traditions inspire the motifs in this culturally rich but elusive extravaganza. Nature plays a dominant role, which we observe through the bold orange feathered hummingbird costumes, pouring rains, and diverse flora. An acrobatic butterfly running through a field of 5,000 Aztec marigolds symbolizes the Tarahumara running tribe, who pay homage to their sacred ancestors. A giant disk illuminates the Big Top, reflecting the sun and moon to honor the magnificence of Mexican architecture.

Even after the show, the performers and music of  “Luzia” follow us beyond the Big Top with Aztec-inspired dancing through the streets. We appreciate the gradual transition back to San Francisco city streets, though we would prefer to stay in their otherworldly realm.

Cirque du Soleil’s “Luzia” successfully unifies the traditional with the hopeful future Mexico.Their performance amazes viewers by engaging with and uniting such vast and diverse acrobats and audiences. We hope for a “Luzia” World, where we can appreciate and wonder at the beauties in nature and culture. On every level and for every age, “Luzia” down by the Bay, remains a force of Nature–waiting for you to arrive.