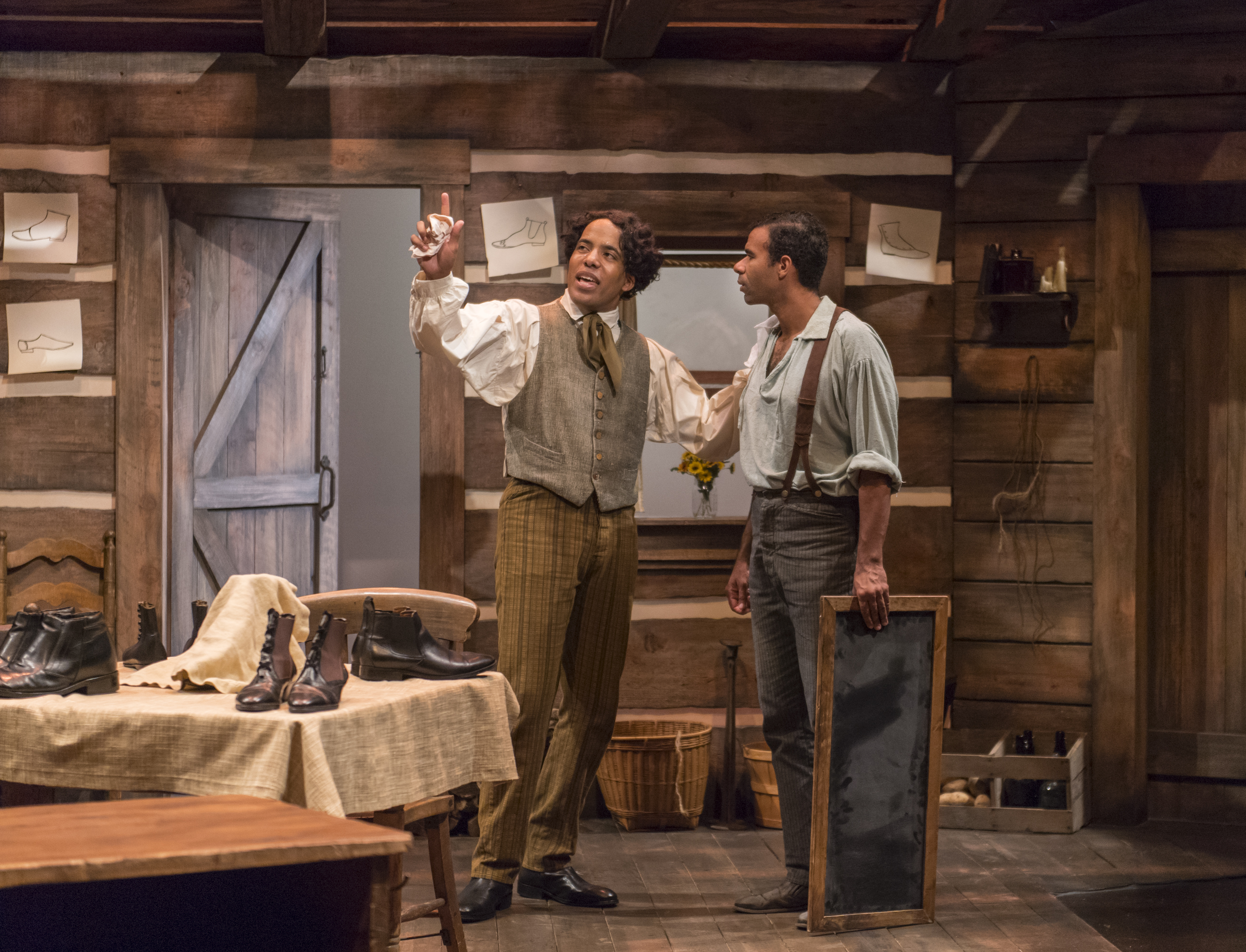 Before the Civil War, hundreds of thousands of African Americans were living in the South as “free” people—a status that constituted a misnomer, and still does.  Aurora Theatre tells us the horrifying story of pre-Civil War “free” Black people in “Safe House” (2014) by Keith Josef Adkins.

Director L. Peter Callender snakes us through the treacherous Kentucky countryside in 1843, where the law is only a suggestion, and the white man plays King of the Hill. We find ourselves in the cabin of the Pedigrews, a family of a free Black people, made up of two opposed brothers: Addison (a talented David Everett Moore) and Frank (the engaging Lance Gardner).  Between them stands their Aunt Dorcas (the motherly Dawn L. Troupe), who tries to keep the battling brothers from self-destruction in the dangerous South. Aurora’s intimate staging, with the audience on three sides, arena style, puts us up close to the Pedigrew family. As we look at their worn wood floors, battered pots and pans, and worn-down furniture, we can feel their lives and their oppression. The Pedigrews are led by the older, authoritarian brother, Addison, who can barely keep the family afloat by over-working as an artisan cobbler and salesman of his expertly-made shoes. Addison is constantly trying to corral his younger brother, Frank, whose boisterous and rebellious behavior puts the safety and tranquility of the whole family at risk. Aunt Dorcas tries to act as the intermediary between the clashing personalities of Addison and Frank. But we sense that she has other, bigger interests.

The strain between Addison and Frank takes center stage, as we note their clash of ideologies in their dress and demeanour. Addison, the older brother, suits up conventionally with scarf, buttoned-up vest, and a smokin’ pair of sharp boots. Contrarily, Frank comes off as rugged, primal, and sexy, with hair popping out of his loose shirt and suspenders pressing tightly against his chest. They are a study in contrasts–reminding us of the later great debates between two leading Black thinkers: W.E.B. Du Bois and Booker T. Washington. Du Bois argued for independence, while Washington stood for subservience.

Frank and Addison debate what it means to be “free,” disagreeing on the very concept of “equality.”  Addison has conceded to the idea of “white superiority,” telling himself: “This is a white man’s world, ya gotta fit in when you can get in.” He wears his hair so that it looks like the wig of a white American politician, very George Washington-esque. He is obsessed with “getting equal” to the white man through his own merit, by succeeding as a businessman.  With success, he thinks he will reach the level of the oppressive white power structure. However, his strategy merely sets him up to be devoured by the traps of “institutionalized racism” in pre-Civil War Kentucky.

On the other hand, Frank, the “free” spirit, gets furious with the white people in town who are, in fact, controlling them. He sees right through the veil of “freedom” that the whites have set up. The Sheriff sends his henchman, Bracken (the dynamic Cassidy Brown) to keep “an eye” on the rural and potentially rebellious Black folk.

Technically “free,” the Pedigrews have been put on a two year ‘probation’ for trying to help a slave escape from his master and cross to free territory in Ohio.  Two years before, that runaway slave was caught and tortured to death. The Sheriff controls Addison, through the power of  that probationary period. The Sheriff imposes his own version of “civilized” slavery, a new, illegal slavery, enforced by Southern custom and terror.

Just as the Pedigrews are emerging from their “probation,” an escaped slave (the riveting Jamella Cross) will test their fortitude and ethics, profoundly. The production will have you at the edge of your seat, wondering if the Pedigrews can  survive the trials of the threatening and brutal world “free” Blacks in the slave-holding South.

“Safe House” becomes even more relevant when we realize that Adkins’ script offers parallels to today’s  America. What happens to the Pedigrews, still happens today. The patriarchal hierarchy still  sets up ideal expectations for African Americans and other immigrant groups to pursue.  Do we still dictate conformity to conventional culture to make success remote? Do we put high price-tags on colleges in order to bar the door to the “Other”? Adkins’ play and the powerful cast are asking us: Are we treating the the “Other” like children or worse? Have we changed our ways?