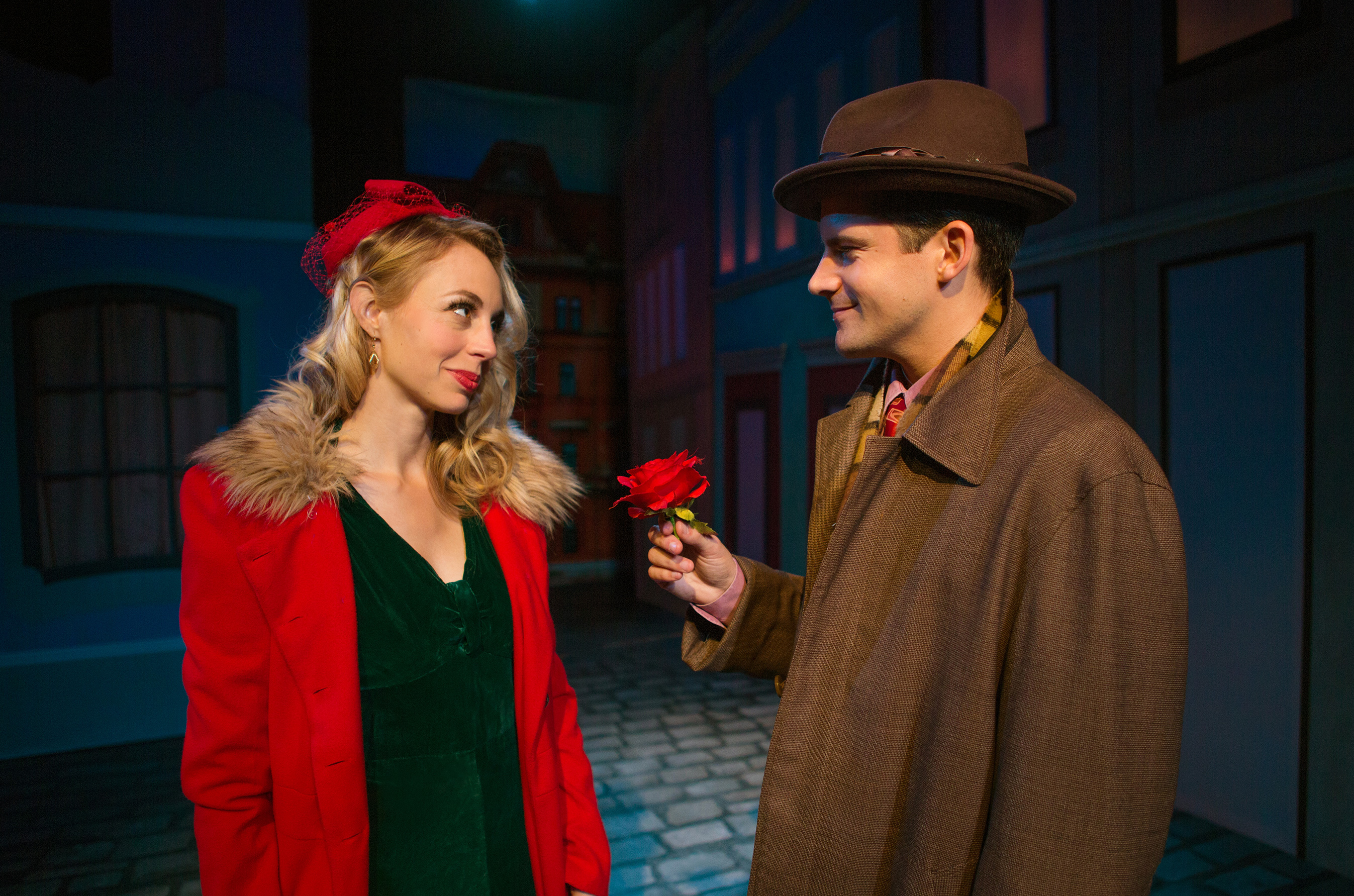 Shop Clerks Sing Their Hearts Out in Pre-War Hungary

“She Loves Me,” the 1963 musical hit, proves that we are all hopeless romantics. Set in Budapest in 1937, two secret pen pals work in the same elegant perfume shop. Although they fall in love anonymously on paper, they continue to clash, blindly, in their real lives. Director Susi Damilano and the captivating cast at San Francisco Playhouse pierce beneath the workaday surface, discovering lyrical love in unexpected corners.

A 60s classic by Joe Masteroff, with music by Jerry Bock and lyrics by Sheldon Harnick, “She Loves Me” radiates sentimental serendipity and Christmas cheer. The original 1937 play, “Parfumerie,” by Nicholaus Leitner, an Hungarian writer, has been made into several movies, including “You’ve Got Mail” with Tom Hanks and Meg Ryan.

A beautiful rotating set places us in an idealized 30s Budapest, on a charming cosmopolitan street lined with shops and apartments. Set designers Bill English and Jacquelyn Scott have recreated a dream of Eastern European nostalgia with Maraczek’s upscale shop, where bright perfumes and creams adorn the wood paneled walls and tall glass display cabinets.  Above this feast for the eyes, orchestra and music director David Aaron Brown serenade us from three balconies.

The enchanting Monique Hafen as Miss Amalia Balash, sings each song as if it were her own, and steals our hearts. Balash, a wildly idealistic and romantic perfume clerk, falls in love with her lonleyhearts pen pal, “Dear Friend.” Her secret friend, Georg Nowack (the dashing Jeffrey Brian Adams), plays a level-headed, loyal store clerk at Maraczek’s Parfumerie. Later, Georg is horrified to discover that his beloved “Dear Friend” is none other than his feuding colleague Amalia.

As Amalia gets to know Georg better, she secretly suspects—and hopes—that Georg is her “Dear Friend.” We see the beauty in both hilarious caricatures, and root for their success as they navigate their secret relations, more like a family than mere co-workers.

A silly, yet somehow reasonable Ladislav Sipos (the engaging Joe Estlack) comforts and inspires Georg as his wingman. The young delivery boy Arpad Laszlo (the naïve Nicholas J. Garland) contemplates the irony of lovers arguing,as he sweeps the fall leaves.

Engaging acting and brilliant direction highlight each character’s development. Amalia has a  humorous meltdown as she sings,  “Where’s My Shoe?” She kicks and flails wildly, as she hits every note—even while Georg carries her over his shoulders! Then, she endearingly portrays her conflict over Georg’s sudden act of kindness in “Vanilla Ice Cream,” while sloppily eating between bouts of writing to her “Dear Friend.”

Prim and proper Georg stands on the other side of the door and bursts into “She Loves Me,” leaping with happiness and clicking his heels. We have to smile at both their transformations, when they finally connect like the pieces of a puzzle.

As Christmas approaches and Amalia and Georg grow fonder, we see changes in the employees at Maraczek’s Parfumerie. Ilona gives up her bad boy infatuation, falling in love, instead, with a bookish optometrist. Arpad promotes himself to part-time clerk, and Mr. Maraczek turns his failing marriage into an opportunity to experience life. Each character evolves to show resilience, when faced with the changing world.

The set brightens up, as well, with a lighted Christmas tree in the store window and golden tinsel lining each wooden display cabinet. We want to jump onstage and shop with the other customers, asking the cordial clerks what might be the best gift for our mother or sister. Though it may be snowing outside, we feel the warmth emanating from the happiness and bustle onstage.

Creative choreography by Kimberly Richards enlivens each scene. While Amalia waits to meet her “Dear Friend” for the first time at the Café Imperiale, sophisticated couples clad in vintage satin gowns and tuxedos engage in raunchy antics. As the maître d’ (Brian Herndon) frantically attempts to retain the “romantic atmosphere,” cabaret dancing mixes with exotic music and dissolves their inhibitions.

“She Loves Me” warns us  never to judge a book by its cover—or a letter by its envelope. A little kindness and vulnerability take Amelia and Georg to unexpected heights. Let us be the bearers of “vanilla ice cream” and enjoy some love. “She Loves Me” debuts as S.F. Playhouse’s perfect passion play for the Holidays.