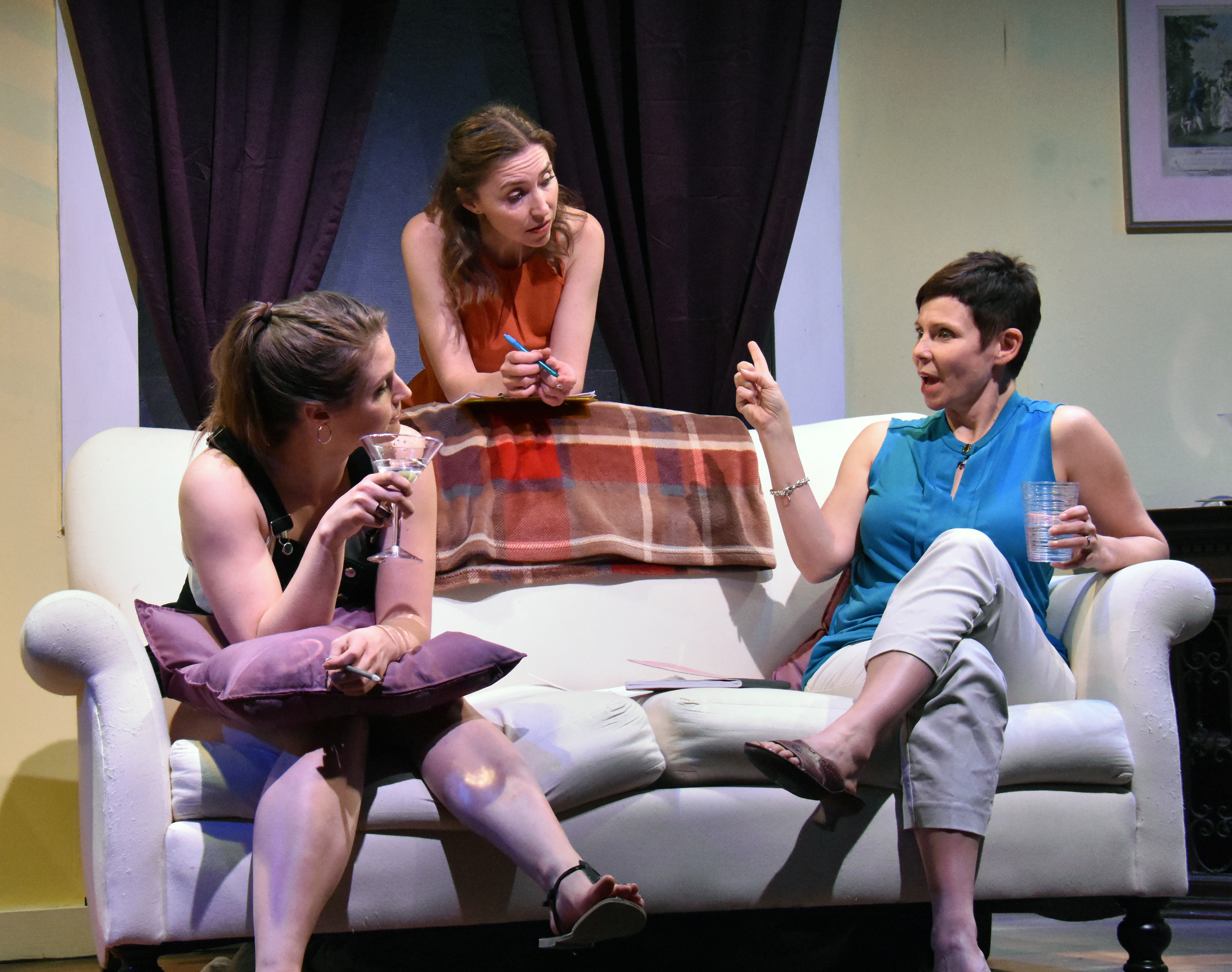 What women want wavers between our practical minds, passionate hearts, and reproductive needs. In order to “have it all,” we must strike a delicate balance while appeasing traditional demands.  Custom Made Theatre’s edgy “Rapture, Blister, Burn” by feminist playwright Gina Gionfriddo, briskly directed by Leah S. Abrams, examines four supposedly content women from three generations. However, their troubled histories expose the dangers of trying to be perfect in a male dominated world.

On a living room couch in New England, four women debate their views about feminism with ferocity and wit. Catherine (Teri Whipple) leads the discussion as a successful professor who returns home to care for her ailing mother, Alice (a delightful Linda Ayres-Frederick). Alice, the expert mixologist, intervenes at the right moments with a cocktail and a quip. With a few words but many years of wisdom, Alice lifts the sourest of moods.

Catherine’s best friend from college, Gwen (Lauri Smith) has two children, and also nurtures her pot- and porn-addicted ne’er-do-well husband Don (Ryan Hayes). Gwen’s teenage baby sitter Avery (Amanda Farbstein) inserts frank questions and clever comedy into their heady intellectual debates. We get to mingle with a group of confident super-women who have made hard choices.

But the ages old battle for women’s right to flourish bares its teeth, as Catherine, the successful professional; and Gwen, the consummate mother—reveal that they covet each other’s lives.

On the porch, visiting Catherine and lazy Don whisper together, and an old flame ignites. The cool evening breeze and chirping crickets announce their forbidden affair. Under the cover of darkness and alcohol, alarming insecurities break through Catherine’s professional pose. Will Catherine break the rules and take on the role of homewrecker?

In a shocking twist of events, the two women agree to swap lives—and Don. Catherine stakes her claim to Gwen’s husband, staying in town to take over the domestic duties at Gwen’s house. And Gwen moves to Catherine’s apartment in New York City to finish her graduate degree.

Gionfriddo uses this unexpected role reversal to show each woman’s plight. Unthinkable in most lives, we see the consequences of their decision play out on stage.

However, the roles are not equally reversed. While Gwen struggles to become an independent student in the big city, Catherine never faces traditional domestic challenges. She relies on Mother Alice, who cooks, cleans, and takes care of Don and Gwen’s toddler. She’s suddenly more equal!

Catherine’s only challenge lies in maintaining Don’s happiness, which quickly wanes due to Catherine’s constantly fluctuating expectations. Catherine’s drunken adolescent behavior digusts us; she loses her charismatic confidence. How quickly Catherine falls from enviable trailblazer to selfish slob! We see that even the most satisfying sexual romp cannot replace love built upon years of commitment.

Gionfriddo validates each woman’s perspective, asserting the unfinished business of feminism through bold arguments. The women discuss violent pornography, horror movies, and sexual fetishes. We find ourselves immersed in controversial thought experiments that entertain and educate us. Each new discussion arms us with theories from Betty Friedan, Phyllis Schlafly, or Carol Clover, preparing us for intellectual and emotional battles.

The history of feminism unrolls, telling women what they deserve, but not how to achieve it. Director Abrams endows the characters with genuine vulnerability, as they search for personal truths.

While avoiding stereotypical women characters, Gionfriddo still manages to heap scorn on Don, her token male character. We are still waiting for the day when men and women  can play equal roles on stage and off.

As women’s freedoms evolve, “Rapture, Blister, Burn” reminds us that our goal is a moving target. After trying on each other’s lives, Catherine and Gwen try on new goals. From the horrifying to the hilarious, Gionfreddo’s live wire sexual experiments engage us in the fun and the future of new gender horizons. You will enjoy trying on some new ideas with them at Custom Made Theatre–that’s for sure!