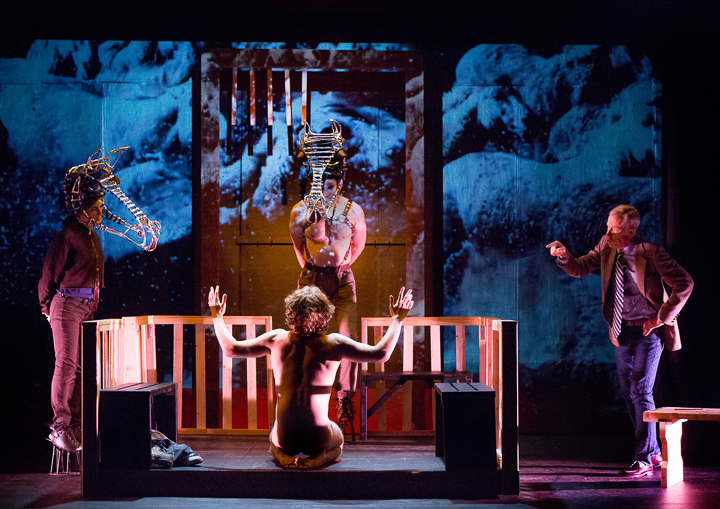 The evening with Theatre Rhinoceros, at the Eureka Theater, begins with the silhouette of Artistic Director John Fisher as Dr. Martin Dysart, lighting a cigarette. The lights come up as he takes a long drag. After that, he propels us headlong into “Equus” (1973), the boisterous story of the troubled young boy Alan Strang (the mysterious Morgan Lange). As both director and actor, Fisher guides us along a murky path of sexual awakening, medical ethics, and religious morality.

Peter Shaffer’s “Equus” features Dysart’s newest patient, Alan Strang, a shy 17-year-old who, on one recent night, blinded six horses with a hoof pick. He faces a trial, and Dysart’s colleague convinces the court to send the boy to the psychiatrist for treatment. Lange’s Strang raves, then seethes, then writhes. He portrays Strang as a maniac at full-throttle. His scenes with Fisher often show us an infantile boy, closer to seven years old than seventeen.

“Equus,” for those who have only heard of it in passing as that play with nudity and  horses, offers a feast for the mind. The play questions the differences between normal and abnormal, and whether “normal” only exists as a social construct. Dysart points out that Alan is feeling real passion, something that has been sorely lacking in his own life. But who really needs psychological attention: doctor, patient, or family?  Smartly, Theatre Rhino has put Dysart’s words on the program, imagining Alan saying to him:  “At least I galloped–when did you?”

Does Dysart feel depressed about his life spent helping others, neglecting his own feelings? He admires the gods of ancient Greece, but cannot find the passion to worship them. He bemoans the idea of depriving the boy of his affliction. He envies Alan’s emotional fortitude. Through Fisher’s brilliantly detailed portrayal, we see Dysart’s open and honest concerns. The doctor tricks and twists the truth from his patients, and offers his own truths freely.

We are alarmed when he plainly tells Alan about his recurring dream, where he eviscerates young children in some strange ritual. In the dream, the mask over his face starts to slip, threatening to reveal his growing distaste for the job. Dysart has us wondering if we should embrace psychological abnormality. But then we remember the horses and the terrible tortures of  innocent creatures. We are reminded of Alan’s dysfunction by the pain in his parents’ faces, both expertly portrayed by Rudy Guerrero and Ann Lawler.

The battle between Dora and Frank Strang, with Dysart stuck in the middle, brings up the dangers of religious zeal in children. Alan’s worship of Equus, which turns so dangerous, grows out of his childish interpretation of Christian lore. His father points to religion as the spark that ignited tragedy, and by the end, we see the clear connection.

As Frank Strang, Guerrero adds complexity to the role, when he sternly condemns overzealous faith and asserts the proud atheism of a simple working stiff. And he handles a difficult accent with considerable style. We enjoy Strang’s unusual turns of phrase as he trots them out, though Alan mocks them later. Guerrero shifts effortlessly from the staunch and bullish Frank Strang to a respectful and effeminate young nurse. And we barely recognize him, as he transforms into Alan’s favorite horse, Nugget, with his bulky, muscular chest wrapped in leather straps.

Intriguing, provocative, and admirably performed, “Equus” gallops along at lightspeed, attracting our minds with its mysterious gravity.