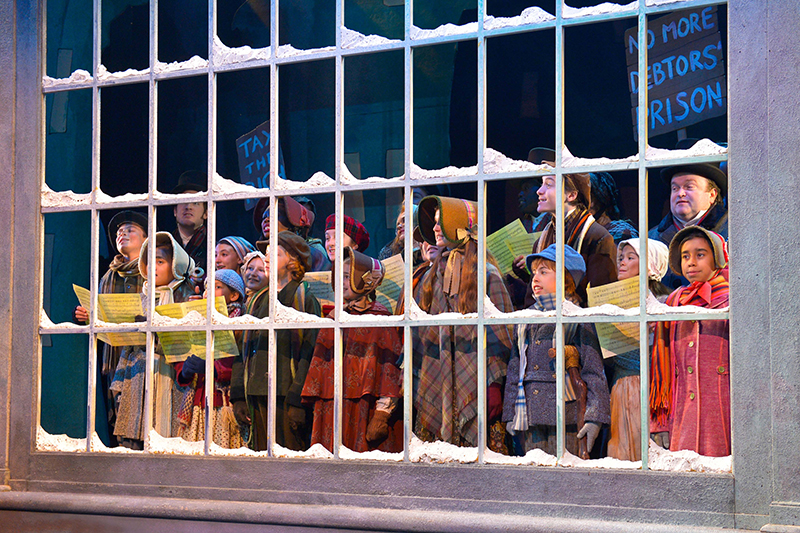 In Amercian Conservatory Theater’s  “A Christmas Carol,” abundance and poverty bump up against each other, starkly. On the teeming Geary Theater stage, we see both Dickens’ Victorian and our own modern economic divides. In San Francisco, the most expensive city in the nation, homeless people sleep on sidewalks near the theater, in front of the ritzy stores in Union Square. How could a full stomach, a warm fire, or a loving hand change those circumstances? Ebenezer Scrooge’s selfishness compels us to consider how our own small acts of kindness could change someone else’s life.

The Ghost of Jacob Marley (a formidable Ken Ruta) emerges with frazzled hair in a cloud of smoke at Scrooge’s bed. Ghastly pale and laden with heavy chains, Marley tells the counting house owner that Ghosts will be visiting Scrooge this late Christmas eve. The Ghosts of Christmas Past and Present arrive to warn Scrooge about his fatal greed and selfishness—Dickens’ warning to the insatiable industrial behemoths of his time, who employ child labor for pennies.

A.C.T.’s multi-talented, multi-generational cast dazzle us with energy and carols. James Carpenter gives a chilling performance as the penny-pinching Scrooge, who transforms himself into a benevolent family man after seeing the terrible visions on Christmas eve. We will recall the people’s protest signs in the English streets: “No More Debtors’ Prison” and “Tax the Rich!”

Director Domenique Lozano and scenic designer John Arnone pull out all the stops this year. Layers of rich setting transport us from Victorian rooms and streets, to grisly graveyards, and exuberant family dinners. We become happily lost in the haze of Scrooge’s dreams and imagination. From the miser’s dark, spartan bedroom to his genial nephew Fred’s gaily decorated Holiday party, Arnone presents the richness of Victorian England. Snow falls on the windowpanes, immersing us in English Christmastime.

Scrooge himself dresses in a tattered nightgown and cap, to show his frugality amidst stored up wealth. After the foreboding visions, he dons a plush coat and bright red scarf, symbolizing the richness of his transformed heart. Other Victorian era costumes include bold and decadent red, yellow and green hoop dresses, and suits for the well-to-do men, but sooty gray rags for the poor street people.

Original songs and music by composer Karl Lundeberg and musical director Daniel Feyer take this adaptation to the heavens.  The solo sung by the Ghost of Christmas Past (the angelic Emily Brown) emphasizes the ethereal without overpowering the drama. She wears a white gown and soars in an illuminated swing above the stage, while golden threads sparkle in the backdrop.

Choreography by Val Caniparoli shines in dance and stylish fight scenes. The Ghost of Christmas Future startles us, looming like a huge, heaving, beastly apparition to show Scrooge the consequences of Ignorance (William Lipton) and Want (Isabel Folkers). Teen-aged gangbangers get into a fight, while Ignorance and Want menace Scrooge.

We fear for Scrooge’s fate at the hands of Ignorance and Want, and examine our own lives in the presence of these two vices. Like Scrooge, we realize that change starts with us, individually.

“A Christmas Carol” comes back in high style, with lessons of humanity and a breathtaking feast for the senses. At the end, Scrooge tells Tiny Tim to “Honor the Christmas Spirit all year long.” He means all of us.