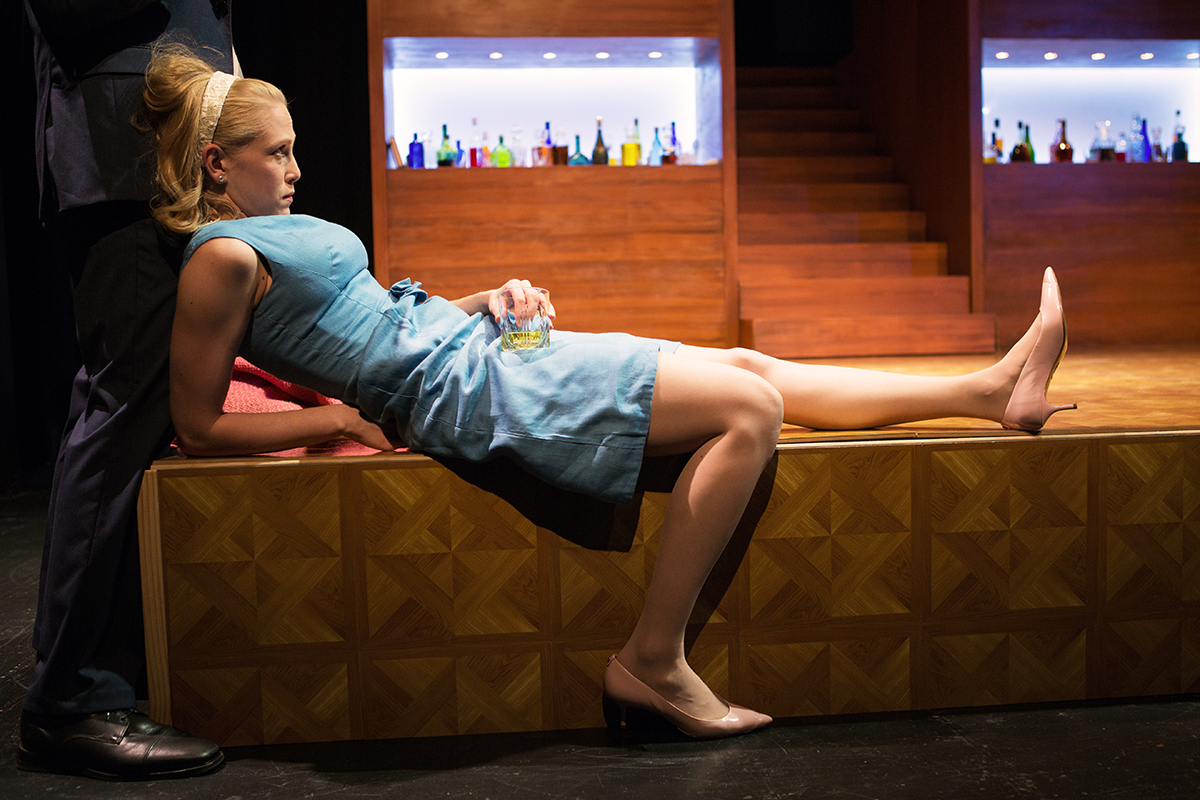 “Who’s Afraid of Virginia Woolf?” (1962)—in the Shotgun Players wonderful new Repertory Season—takes us on a wild roller coaster ride. If you are an Edward Albee fan, or a virgin “Virginia Woolf” viewer, Shotgun aims to shock and surprise. And they pull the trigger. Shotgun uncovers hypocrisy and lies in the home of George and Martha, named after George and Martha Washington, our founding couple. Mark Jackson’s stark direction makes the case for a couple–and a country–at perpetual war and mutual destruction. Albee’s play analyzes both marriage and blind devotion to a cause, all in one deranged “typical” U.S. home. Jackson has made Albee’s great work relevant to America at the crossroads.

The production immediately entangles us in Albee’s jarring ironies. Albee exposes deep conflicts: husband and burnt out Associate Professor of History, George (David Sinaiko) and his wife Martha (Beth Wilmurt) resent each other with an implacable vigor. Why such hatred and animosity towards each other, and why do we even care? Their relationship serves as a metaphor for contemporary American issues: the monopoly that capitalism has on our country, and the ridiculous 50s Cold War arms race, called MAD, for Mutally Assured Destruction–still relevant in our militarized present.

The first act features George’s covert hatred and Martha’s inescapable “braying.” I got the impression that they barely know each other. Both highly talented actors in Shotgun’s superb series of plays in rotation, Sinaiko and Wilmurt deliver first-rate individual performances. In Albee’s play, however, it takes a leap of faith to see them as a couple. We have to remember that in the 50s, divorce was not so popular. They have created an historically accurate and frightening marriage, locked in a death grip, like the U.S. and the U.S.S.R.

David Sinaiko plays George with an incredible sensitivity—his solid, sturdy silhouette highlights a dynamic acting style, a perfect mix for the defeated George. Beth Wilmurt plays Martha, his fierce wife, enemy, and beloved, ruling the stage with electrifying energy. Wilmurt stomps across the elegant, empty, and sterile set with authority, even when we would expect some diplomatic nuance. She makes us yearn for dull diplomacy, rather than Drumpfean narcissism.

The play takes place in one emotionally and intellectually exhausting night. Will this night be the culmination of a decade’s worth of mind games and sick manipulations between George and Martha? Or, will the couple’s Cold War escalate to many more Hot Wars? George and Martha are a microcosm of the U.S. engaged in ruthless competition, in the very era of “Mad Men.”

In fact, Martha represents the whole system! She embodies capitalist competition and the “arms race,” eating away at America. She eats, chews, and then spits out the men who have diminished her. She wants her revenge.

Their sadistically amusing relation escalates to fiery psychotic confusion. Because they require a 2:00 A.M. audience for their S&M encounters, they invite the young, ambitious biologist Nick (Josh Schell), and his wife Honey (Megan Trout) over for drinks. George announces the game called “Hump the Hostess,” and other treats. The eager and naïve faculty member and his ditzy wife are in for a serious indoctrination—something like the Presidential debates on steroids.

As Honey, the young wife, Megan Trout catapults the production to a new heights.  From the get-go, Trout brings a super-charged comical energy that ignites laughter, as she digs deep into Honey’s willful naiveté. At one moment, Trout will be hysterically laughing, out of place in the conversation. But before you know it, she is wailing, or becoming sick, making herself blind to the brewing sexual tango between her husband, Nick, and Martha. Trout brings comic relief to the flying  intellectual and emotional daggers.  She struggles to avoid the competition, an outlier among the beasts.

Honey epitomizes our own fear and confusion. We have just “elected” a Trump into office as our next President, who represents corporate control, glorified greed, and icey individualism–all on display in Albee’s play. Our new leader wants our country to regress to an imagined 50s, which Director Mark Jackson has brilliantly and precisely laid bare in this production. Now, it’s “Make America Groan Again” and show the world that we are the biggest bully since Rome. Better get over to Ashby Stage and see our Brave New World on satirical and comic display, over in Berkeley, now.

Shotgun Players is now performing “Who’s Afraid of Virginia Woolf?” in addition to four other excellent productions, in rotation. Their five shows are available on a unique weekly basis. For the dates, see: repcalendar

The productions include“Caught” by Christopher Chen, “Grand Concourse” by Heidi Schreck, “The Village Bike” by Penelope Skinner, and “Hamlet” by William Shakespeare, running from November 25 to January 22, 2017.