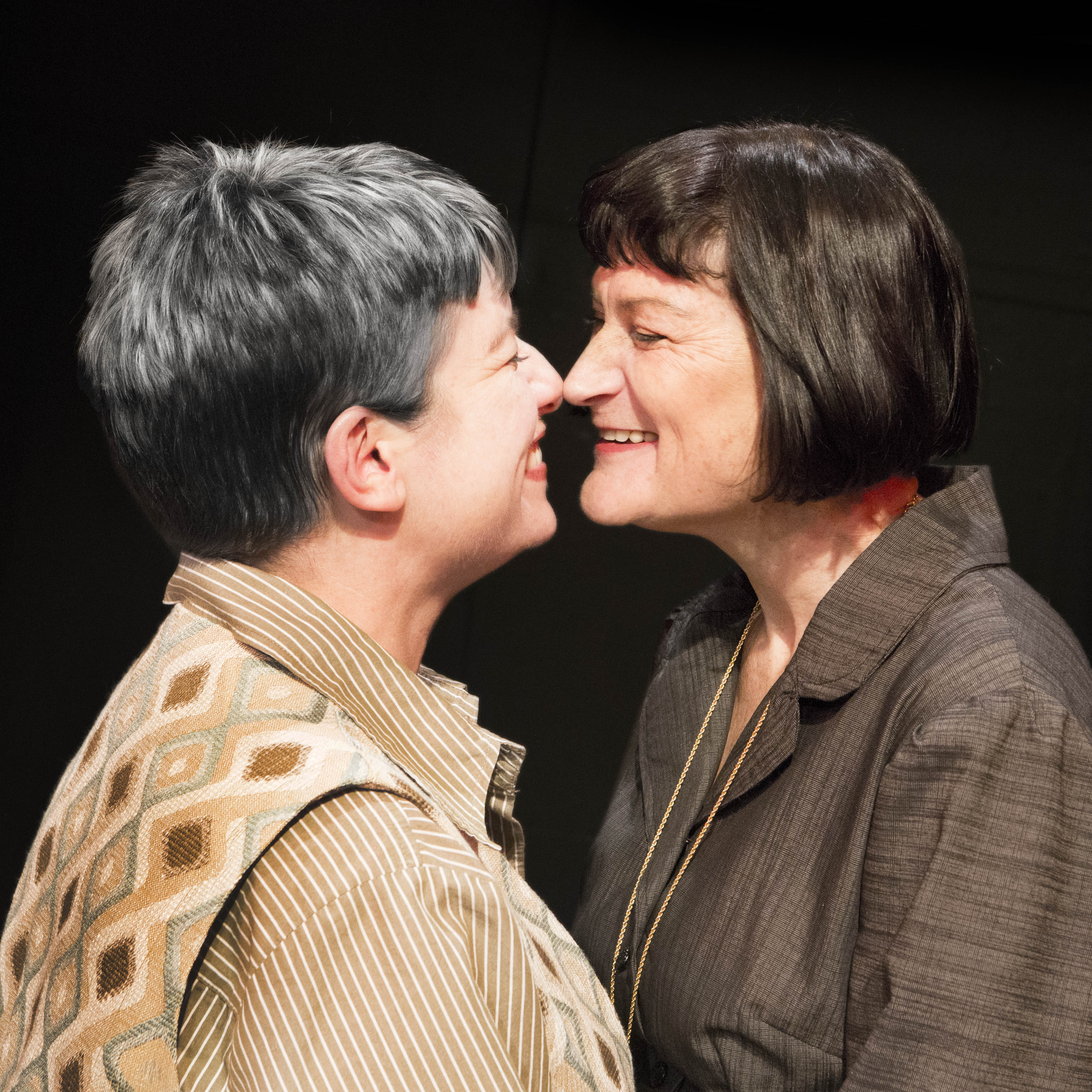 Who knew that Gertrude Stein was such a sweetheart? Lots of us have followed her work, her life, her friendships, her painting collections, her myth, her love affair with Alice B. Toklas for years.  Some folks still say, “Gertrude Who?” But her presence keeps growing in Woody Allen movies, in witty stories….Isn’t she the world’s Best Known Lesbian Writer, after all?  They were “Out” lesbians in the early 1900s! These are the San Francisco-Oakland Jewish women who put America on the literary and gender map—and they did it from Paris!

Gertrude and Alice embody the Americans in Paris expatriate moment in the teens and 20s, when they hosted Hemingway, Picasso, Matisse, Fitzgerald, Proust, Joyce—all of the them, incredibly. They all eat Alice’s dinners, at the Stein-Toklas high-ceilinged Paris digs.  They all come to see Gertrude’s solid wall of new impressionist and cubist paintings by Picasso, Matisse, Cezanne, others.

They come to do homage to the Mother of Modernism, to admire the first collection of “modern” paintings. They come to eat Alice’s cooking.  G. & A. shop at the local Paris street markets, and Alice cooks the delicious meals. Alice and Ernest disagree, they both love Gertrude.  Alice has to sell one of the precious paintings to get Gertrude’s book published. They are living the 20s Paris life that we all swoon over–and it’s all here onstage in “Gertrude and a Companion” by Win Wells.

For many years I struggled to teach Gertrude Stein’s work—her essays, her poetry, her short stories about women in Three Lives–to waves of college students. Except for a few takers, most students rebel as soon as they see her on the page—especially the poetry. Her use of words in her groundbreaking “modernist” poetry, like “Tender Buttons” (1914), remains brain-boggling for most of us—it makes no sense—why try? That’s the reactions of most people. Stein refuses to fit into the era of  Twitter, T-Rump, and tagged photos. But she has lots to say about living under cruelty, and with gusto.

And yet, as with great poets like Whitman and Stein, the opposite is also true. Her staccato rhythms and surreal language fit us perfectly well. Here’s one sentence from her essay “What Are Masterpieces and Why Are There So Few of Them?” (1940):

“…..Therefore I was going to talk to you but actually it is impossible to talk about master-pieces and what they are because talking essentially has nothing to do with creation.”

And now Theatre Rhinoceros, in all its daring , has brought us Wells’ 1986 play “Gertrude and a Companion,” already a BBC movie, to let Gertrude explain herself. Katherine Wood embodies a fresh and surprising Gertrude. Wood puts her heart, mind, and style into a new Stein—one who is friendly, jovial, down to earth, loving, and approachable. Based on Stein’s life and work, Gertrude is no longer the glowering brown figure in the portrait by her friend Pablo Picasso. Wood’s Gertrude lights up the stage, and confronts Nazi colonels. She bravely submits her work, her life, her love to her “companion,” Alice. G’s love goes on even after her death, as she returns to advise Alice in flashbacks and flash-forwards—all exquisitely charming, loving, and effective.

Toklas, sensitively and sharply portrayed by Elaine Jennings, turns out to be a more commanding figure than we thought.  We hear from lots of letters that Toklas wrote, since the play is full of the words and styles of both Gertrude and Alice. Although we get the facts of their life together, we also get the feelings that make their lives unique—Wood and Jennings come up with gold, quip after quip, crisis following crisis.

Smoothly directed by Wood and the reliably brilliant John Fisher, Rhino’s Artistic Director, we float seamlessly into the 20s Parisian life in the apt. at 27, rue Fleurus, and 5, rue Christine.  Alice directs that household, firmly and subtly, from the 20s to the 60s–with the Ghost of Gertrude at her shoulder.

How did two Jewish lesbians from San Francisco and Oakland manage to live in Paris and in the South of France—through WWI, the 20s, the Depression of the 30s, and WWII?  There’s enough questions there for a Grand Opera.  Of course, Gertrude has written an opera about saints, too:  Her opera called “Four Saints in Three Acts” (1928), features an all-Black cast and Black Choir. Working with American composer Virgil Thomson, Stein breaks down racial, linguistic, and musical barriers, too. Gertrude and Alice manage to be way out ahead, again.

Alice sells one of the master-piece paintings to fund the new Plain Press, calling the Picasso painting “dollarless.” She manages to publish Gertrude’s The Autobiography of Alice B. Toklas (1933), which becomes an international best-seller. You can see the original books on display in the Eureka Theater lobby. And they embark on a popular lecture tour back in America! The press goes nuts. Amazement at every stop.

“Gertrude and a Companion” becomes a docu-drama full of sweet, subtle, and seductive touches. Harley Bertelsen plays “Everybody Else,” from Nazi officer to US soldier to predatory relatives.  The three women take us more intimately into the mystery of Gertrude and Alice than any other work I have seen.  Rather than obsessing over Gertrude’s greatness as a writer, Wood and Fisher give us the home life, the personal conversations, the historical upheavals that two strong women faced for decades, in France and the U.S. They knew everyone and everyone knew them. Better go over to the Eureka Theatre to see the touching, sensitive, and winning portrayals of Gertrude and Her Alice at Theatre Rhino.  Katherine Wood and Elaine Jennings will welcome you, warmly. I am going to see it, again. Hurry up: Only playing till Sunday, January 8th! Let G & A Make US Great Again! They know how to live.

Cast: Kathryn Wood as Gertrude Stein. Elaine Jennings as Alice B. Toklas. Haley Bertelsen as Everybody Else.