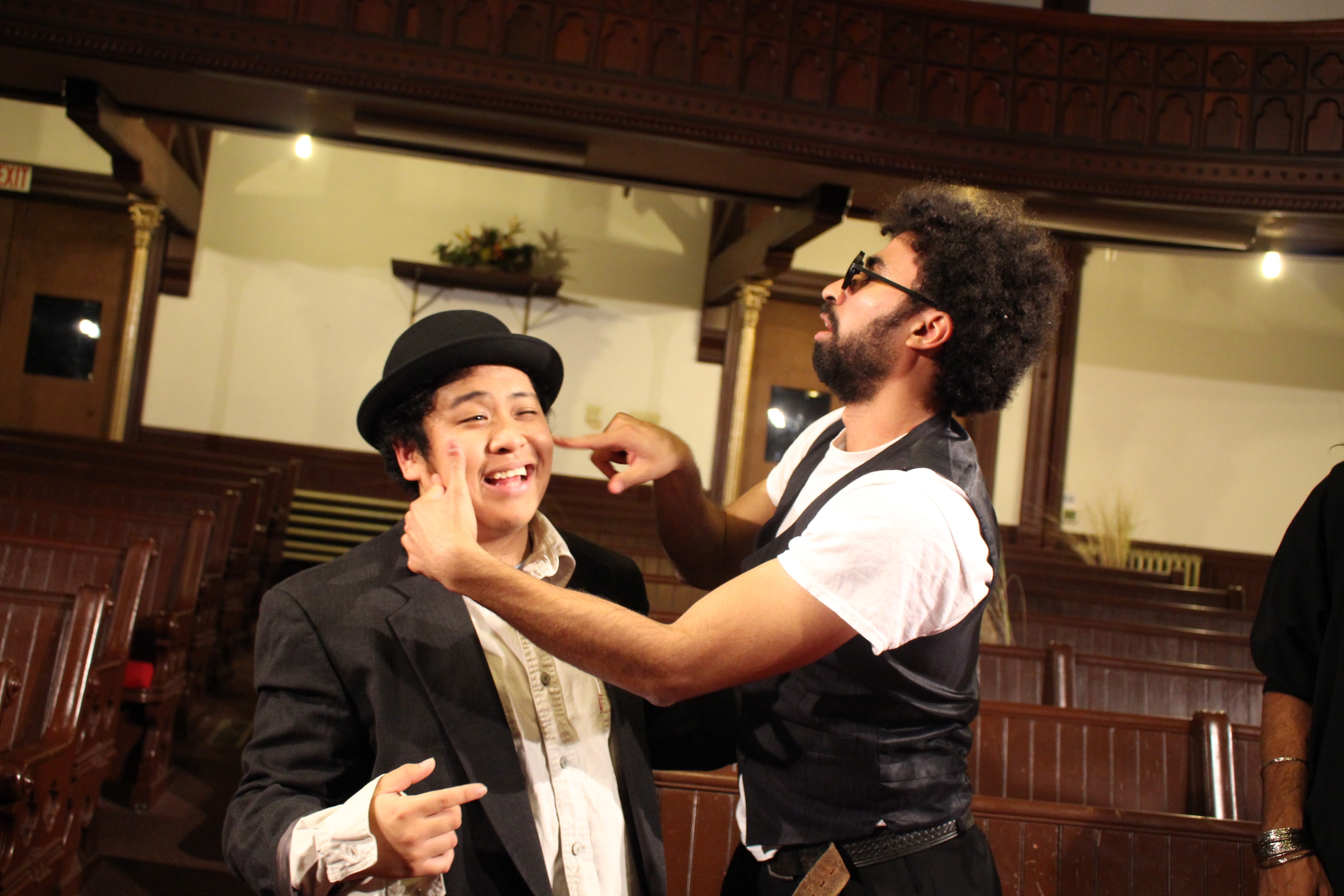 Samuel Beckett accomplished the impossible when he wrote “Waiting for Godot” in 1949, the classic absurdist play about the vacuity of life. Ubuntu Theater Project’s version, with Inferno Theater, illuminates our lives with its mesmerizing actions and reactions, punctuated by spectacular comic rants. Ubuntu offers the full spectrum of life reduced to a test tube. Their Beckett delves the depths of human suffering, and helps us find a way out at the end.

Step into the sanctuary of Brooklyn Preserve, formerly Grace Temple Baptist Church, in Oakland, and look out at the empty wooden pews. You are looking at the stage setting for Ubuntu’s “Waiting for Godot.” A few tufts of straw stick up from some of the seats to symbolize a stark field. And imagine that a huge church chandelier is really a bare tree with no leaves. Watch the actors twist, turn and fall asleep in those pews and perform other “pew business” not usually seen on stages. Seeing Godot from the pulpit puts the play in a maze with actors trying to escape.

“Godot” opens with Vladimir, affectionately called Didi, rising from a pew nap, while Estragon, called Gogo, wrestles with his tight and odoriferous shoes. As portrayed by J Jha, our Vladimir is a lightning bolt, crackling with energy, throwing off sparks of wonderment. He is the eternal seeker of answers and spiritual enlightenment. Energetically, he challenges Gogo (Kevin Rebultan) to show a smile, a little happiness, like the smile which is beaming from his own broad, intense visage. Gogo responds, “What do we do now that we are happy?” The answer to most questions in the play is: “Wait for Godot.” Although the mystery of “Who or What Is Godot?” is never answered, that question keeps us going, in search of a meaning or purpose.

While Didi is constantly seeking spiritual and meaningful answers, Gogo is focused on more earthly things like his feet and his need for sleep. Rebultan inhabits this 25-watt bulb persona by posing simple solutions to the void they inhabit. Gogo suggests: “Let’s abuse each other and then make up to pass the time”; or ”Let’s hang ourselves. You first.” The Didi/Gogo personality poles complement each other; and they embrace their differences with hugs of affection, empathy, and intimacy. At the same time, the duo fears the closeness of human connection, and they retract into their shells momentarily for balance, admitting they might be better off separated. Beckett collapses the ups and downs of human relations into a few lines of dialogue. Ultimately the need for togetherness wins. In their banter, we hear superstitions (‘You can’t tell your dreams or it’s bad luck”), anxiety about showing up on time, in the right place (“Was it today?”), and sadness over the decline of the aging body (Gogo cannot control his feet and Didi cannot control his bladder). They fear the loss of dignity and respectability that may come with old age.

To keep their constant repartee interesting, Director Giulio Cesare Perrone sets the actors climbing across the pews, tumbling into them as they search for answers. They are killing time, waiting for their appointment with the Force. The elaborate choreography can be distracting, making it hard to hear the actors. Didi and Gogo’s manic activity becomes all the elements of living, expanding this “Godot” into a spiritual quest.

Our tireless twosome is interrupted and relieved by the appearance of Pozzo (Mohammad Shehata) and Lucky (Indigo Jackson), the classic master and slave. Pozzo is pulling his captive by a long rope around Lucky’s neck. Pozzo expounds, while Lucky waits in exhausted silence. A true fascist orator, Pozzo spouts his self-indulgent, random ideas with uber arrogance, like a presidential candidate. Then, he melts into gibberish, extemporizing into the air. Pozzo rides roughshod over conversational openings and questions in an abrupt presidential power play.

The unusual casting of Lucky as a female expands the master/slave to include male/female dynamics. Is Lucky really a slave? Does she long for a different role? After being obediently mute, she finally bursts into a monologue that is unintelligible, but emotionally stirring. Is she going to break her submissive posture and be liberated from Pozzo’s bondage? Hopes are dashed as she and Pozzo exit the scene with rope and whip at the ready. In Act Two the pair resolve any tensions into a warm embrace of co-dependency.

“Waiting for Godot,” written in French a few years after WWII, falls under the shadow of that terrible war when Gogo says, “It would be better to kill me like the others. But then you just get a cross and are forgotten.” In Act Two, time has become a monster for frantic Didi, waiting for Godot to appear,  worrying if they are on time for their meeting, and making up games to pass the time. Beckett has written an abstract play about the absence of meaning in a random, uncontrollable world. His symbolic tree of life is bare in Act One, but sprouts greenery in Act Two. The renewal of life progresses in a design we cannot fathom. Although I have seen “Godot” performed many times, Ubuntu’s interpretation is the most heartening: passionate and animated—full of the heartbreak of an elusive quest. The Ubuntu/Inferno team performs with a dedication and charm that raises us from despair. Don’t miss their unusual interpretation.