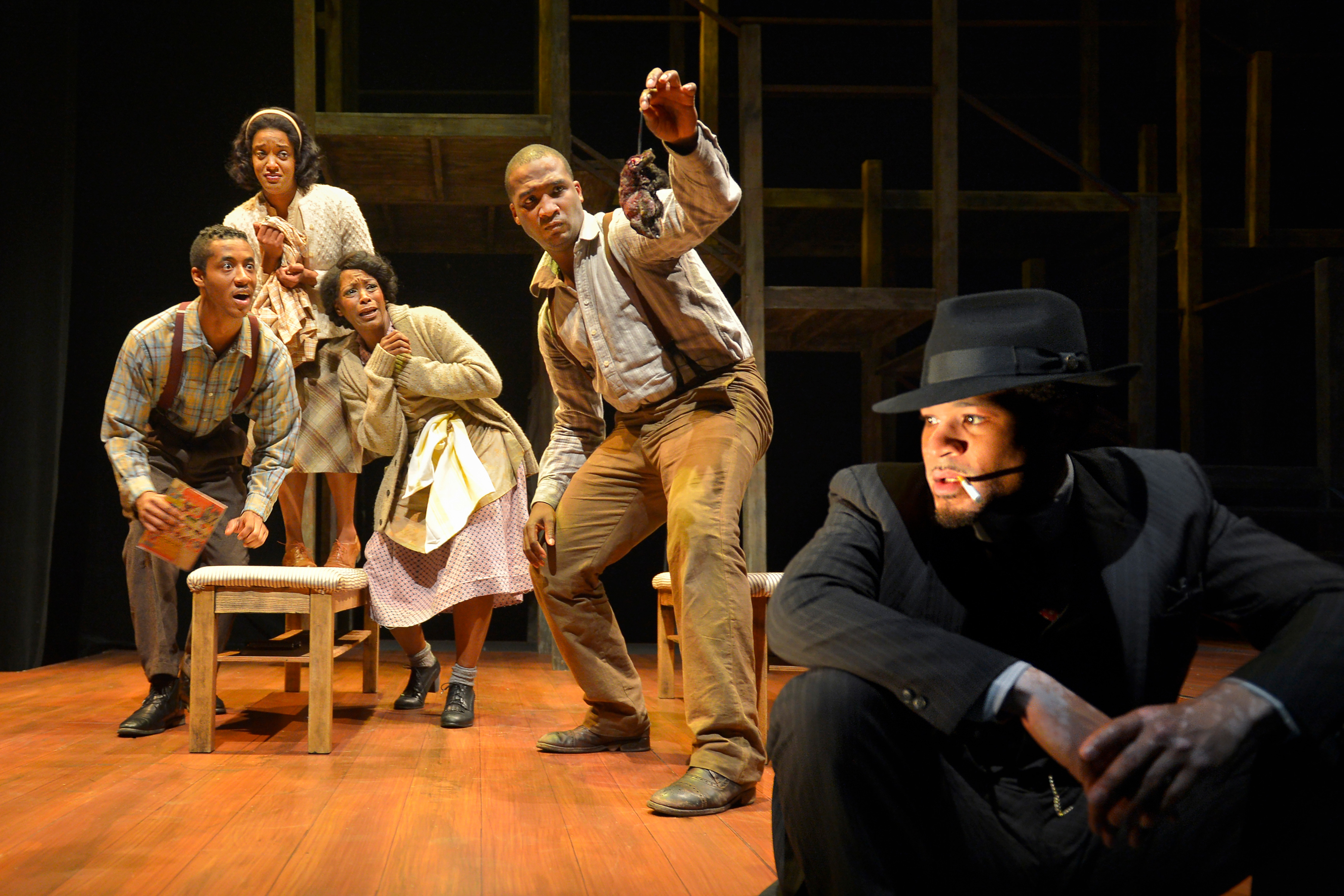 You will remember Jerod Haynes playing Bigger in “Native Son” at Marin Theatre Company. He does a yeoman’s night’s work embodying a black man’s obligatory “double consciousness,” which demands that a black man in the U.S. must always be hyper-aware of how Others are seeing him. In addition, he has another, truer vision of himself that he has to keep secret. As W.E.B. DuBois has taught us, a black man, like Bigger is not allowed to live for his own desires or hopes. He is always second-guessing himself.

The key to Nambi E. Kelley’s adaptation of Richard Wright’s 1940 classic novel Native Son lies in her creation of a new character—to reflect Bigger’s inner thoughts, his “double consciousness.” Bigger’s alter ego of “The Black Rat,” is played by the smooth William Hartfield, who shadows the flailing Bigger. A nattily dressed Black Rat stands behind the confounded Bigger, uttering the interior thoughts that dominate the famous novel. By articulating Bigger’s feelings, the subtle Black Rat brings psychology out front on the stage. His presence brings Bigger’s double conciousness to life—with a unique dramatic effect.

Here we have a vast, sweeping narrative, set in the black ghetto of south side Chicago—one of the most notoriously poor and segregated places in the country, during the Depression. The setting on the Marin Theater Stage has been turned into a giant bare wooden structure echoing the bare beams and tenement staircases of the ghettos of Chicago—their skeletal lines speak volumes about Bigger’s neglected life, about Northern segregation and casual brutality.

Set amidst these stark city beams, we find ourselves tossed back and forth in time, between Bigger before he commits the act that makes him a fugitive, hunted up and down the stark uprights that control him. We learn that he fears all white people and cannot talk to them. He wants to be an aviator but has no hopes, living in utter despair.

He starts as an almost inarticulate lonely young man, who has no work, no education, no future—looked upon by the ruling wealthy people as merely a plaything. The rich people, the Daltons, who hire him as a chauffeur for their daughter Mary (Rosie Hallett) think they are being kind; but they cannot see him as a person. When he accidentally smothers Mary, as she is trying to seduce him, her blind mother is in the other room, crying out. Mrs. Dalton (a sure-footed Courtney Walsh) tries to sympathize with the new worker, but cannot imagine how he lives or where he comes from—even though she and her husband are the owners of the tenements where he lives. The South Side of Chicago remains the home of poverty, murder, and desolation—things have not changed much. And the Daltons of the world toss a few crumbs to the masses.

The wonderful portrayal of Bigger by Jarod Haynes takes us through all the stages of suffering, contrition, naivete, realization, alienation, and isolation. He becomes an avatar of Christ, in his multiple martyrdoms—with no resurrection in sight. His every move makes a statement, his suffering nearly incomprehensible. His downfall at the hands of liberals, like the friendly communist Jan (an intense Adam Magill) and Mary cannot help him. He is trapped like The Black Rat, that he killed in his mother’s kitchen–with no exit.

Bigger tries to come to the rescue of his mother Hannah (a formidable C. Kelly Wright), and his younger brother Buddy (a sensitive Dane Troy), but his understanding of who they are and how they are trapped is necessarily limited. In the maze of beams and bare platforms, he cannot reach beyond the immediate. They have him hemmed in on all sides, from the touching family scenes at the start, to the accidental crime, to the brutal animalistic manhunt, as racist Chicago cops hunt him down.  They project onto him all their fears of the “Other.” They make up fake news. They lie about and humiliate him.

His one help comes from his girlfriend Bessie (a clear-eyed Ryan Nicole Austin), but he loses that one chance, too, under the pressure of popular hatred. This is Les Miserables on steroids—a hopeless case, a bitter hunt for the man they think he is, but whom he has never been.

The novel is hard to take, and the adaptation by Nambi E. Kelley, energetically directed by Seret Scott, testifies to the power of Richard Wright’s Depression novel. How can she to tell this interior story on the stage? The invention of The Black Rat almost does it, as Kelley recounts most of the novel, in shorthand, shifting swiftly from scene to scene, going back and forth in time. However, the final section of the novel has been omitted–Bigger’s liberal lawyer who helps him acquire humanity and understanding; and the climactic trial do not appear in this adaptation. There’s already enough to digest, that’s for sure.

The passages with his family are touching and successful, giving us a sense of how alienated Bigger has become, even from those he loves. The passages with the rich landlords are painful to watch, and evoke that Richard Wright shudder. The play puts distance between us and the characters’ emotions by its stark, expressionistic style—its poetic language. Kelley dares us to try and cross the gap that separates an audience from the double consciousness of a man trapped in his own mind—just him and The Black Rat who haunts his heart.

“Native Son” challenges and accosts the audience, just as Bertolt Brecht would want from a social scandal of exploitation and despair between a self-deluded ownership class and the people they control, silently. As Bigger’s friend tells him: “We all two people but you look in the mirror, you only see one: what they tell you you is.” Anyone who wants to see what lies behind the U.S. today better get over to Mill Valley and see how we came to be. We have to experience it–however vicariously–before it’s too late.