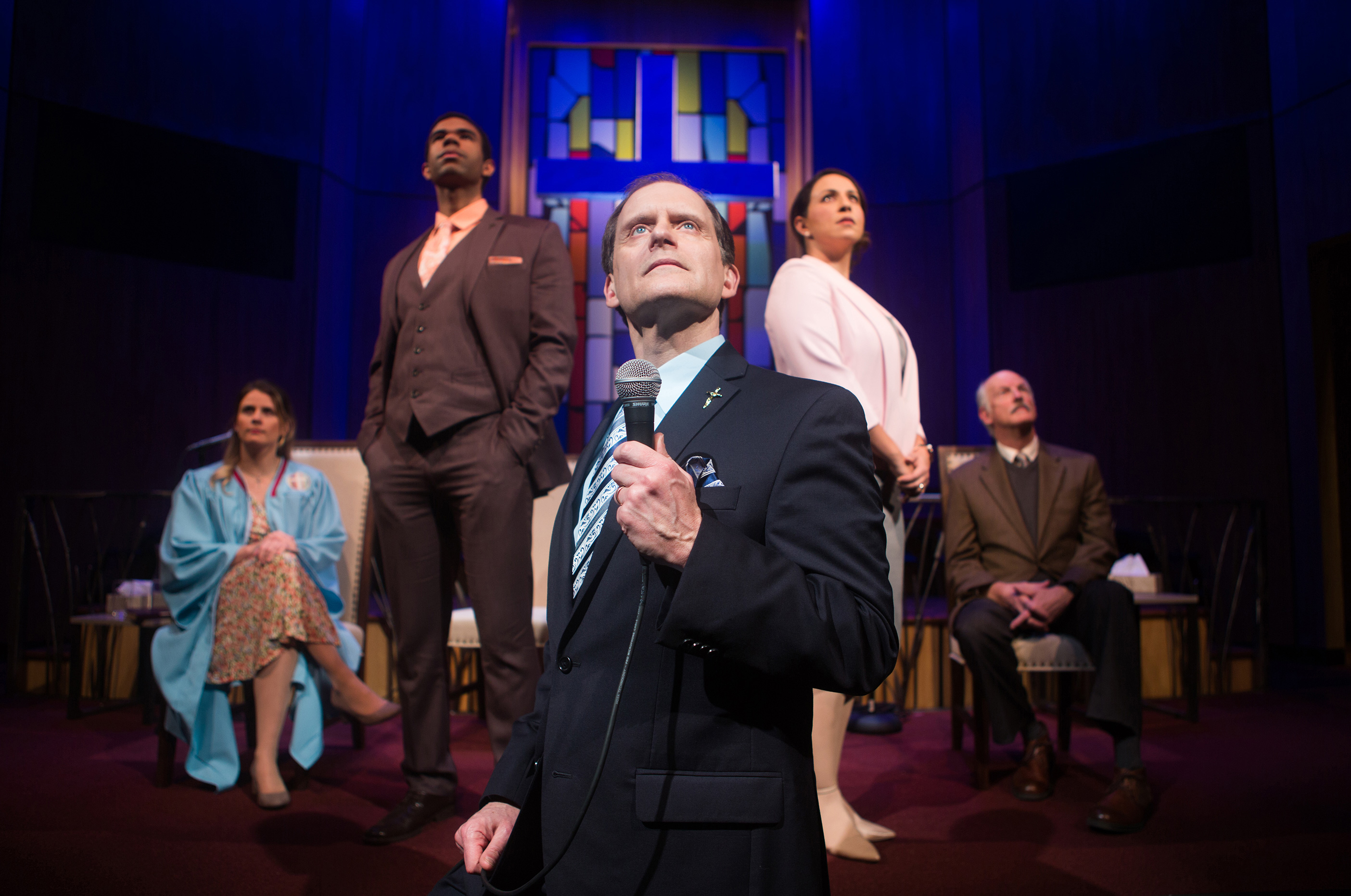 Lucas Hnaf Asks: Does Hell Exist, or Is It Us?

When you wander into a Christian mega-church and find the pastor questioning the existence of Hell, you know you must be at San Francisco Playhouse. What a dramatic conflict that makes onstage, when we are sitting in front of the beautiful and believable blond wooden walls with stained glass windows, and a huge, brightly lit marble cross onstage.

The Choir marches in, wearing sky-blue robes, and standing behind the Pastor, they sing the hymns. We feel like we are in a church, and we begin to get a bit uncomfortable when the Pastor delivers a brilliant and emotional sermon about a terrible event he witnessed in Africa, when a boy sacrificed himself to save his sister. But the boy was not a Christian, which set the pastor to thinking about who is saved and who goes to Hell in Christian ideology.

As a result, the thoughtful Pastor Paul (the engaging and well-versed Anthony Fusco) has come up with a shocking revelation for his congregation—as we sit in for them. Pastor Paul knows how to grab the audience, and bring us over to his side. He makes good arguments; he stirs our emotions. We are with him, as we can be won over by an emotion-laden political candidate, even when we reject his ideology.

And there’s the point I take from this play—that ideas on their own fail to persuade us, that we need stories to elicit our emotions to make ideas real to folks—be they church congregants or voters. Ideas are pitted against ideology, brought to life by emotion. So what is the ideology here? This Pastor has discovered that Hell was just a garbage dump in the Bible, and not “real,” at all. His new ideology now motivates this pastor, and then drives a big wedge between him and the rest of his big, successful mega- Church.  So, the play is not only about church beliefs—to go to Hell or not to go to Hell. No, it’s about political beliefs—and how far away from daily reality they can take us.

The Pastor comes to the conclusion that Hell is already here on earth—and surely his radical choice makes that belief come true.  The power of belief—if you keep saying it, it will be true—The Big Lie! Perfected by Hitler, Goebbels, and others who keep repeating “alternative facts.”  Maybe ideologies warp the truth so much that even believers will rebel against it.

That’s what happens in Hnath’s brilliant play of ideas versus ideology—making fun and a mockery of the daily debates we read and follow and vote for.

So, his Associate Pastor Joshua, (a fiery and beautifully honest Lance Gardner), makes an opposing argument, taking a traditionalist position, and they debate with each other—and each hardens in his position. All the while using the microphone and addressing the congregation—that’s us.

It’s an intellectual and emotional pleasure to Listen to Joshua, too—as he eloquently articulates an authority-driven view of how to run a congregation—or a country. We want to believe in him, too. He has so many good points on his side—as he debates, toe to toe with his mentor, moved nearly to tears, both on the mike, proclaiming their Truths. They are a wonderful debate duo—and we hang on their every word, in this tightly wound precise clockwork drama, directed and designed by the incomparable Bill English.

Joshua forces a vote—and then there’s a mass exodus—finally, even the non-actor Choir takes a stand, and one young woman from the Choir, Jenny, a single mother, with a long blonde pony tail, a long-standing member, who  has struggled to feed her kids and pay the bills—takes the podium. She takes that microphone and argues in stunning, practical terms. Jenny, played by Millie Brooks, nearly stops the show: she is mesmerizing, and turns the tables right before our eyes.

Brooks as Jenny is hypnotic in her truthful emotions, and she transcends ideology with emotion and real life experience. We are stunned by the sight of her working out her ideas in front of us—and bringing in her daily life in a totally believable tour de force. Who can resist her warmth, her beauty, her reality? She turns the tide like an enraged Madonna—always with a microphone, from that same pulpit.

“The Christians” features important debates between salvation and damnation, between debt and doctrine in this newsworthy drama. It will remind you of today’s news and the ideological battles going on inside the Senate, today.

Pastor Paul engages in intimate arguments with Elder Jay (a thoughtful Warren David Keith). Then Paul faces his wife, Sister Elizabeth (an elegant, self-contained Stephanie Prentice), who delivers a sharp and riveting performance as she confronts her husband about basic issues that affect a wife and mother. Revelations—all caught on the mike, in front of all these witnesses, a play within and without.

Nobody gets off the hook easily in this elegant drama of debate and doctrine—even when the arguments get involved and complex and ideological. At some points, you have to sympathize with each of these deeply committed believers—if only for a moment. At those moments, our empathies are enlarged and the public display of Church ideas versus public ideology has done its elegant job for us. Lucas Hnath has something new to say that we  had best see and hear and think about at S.F. Playhouse. “A hit, a palpable hit.”