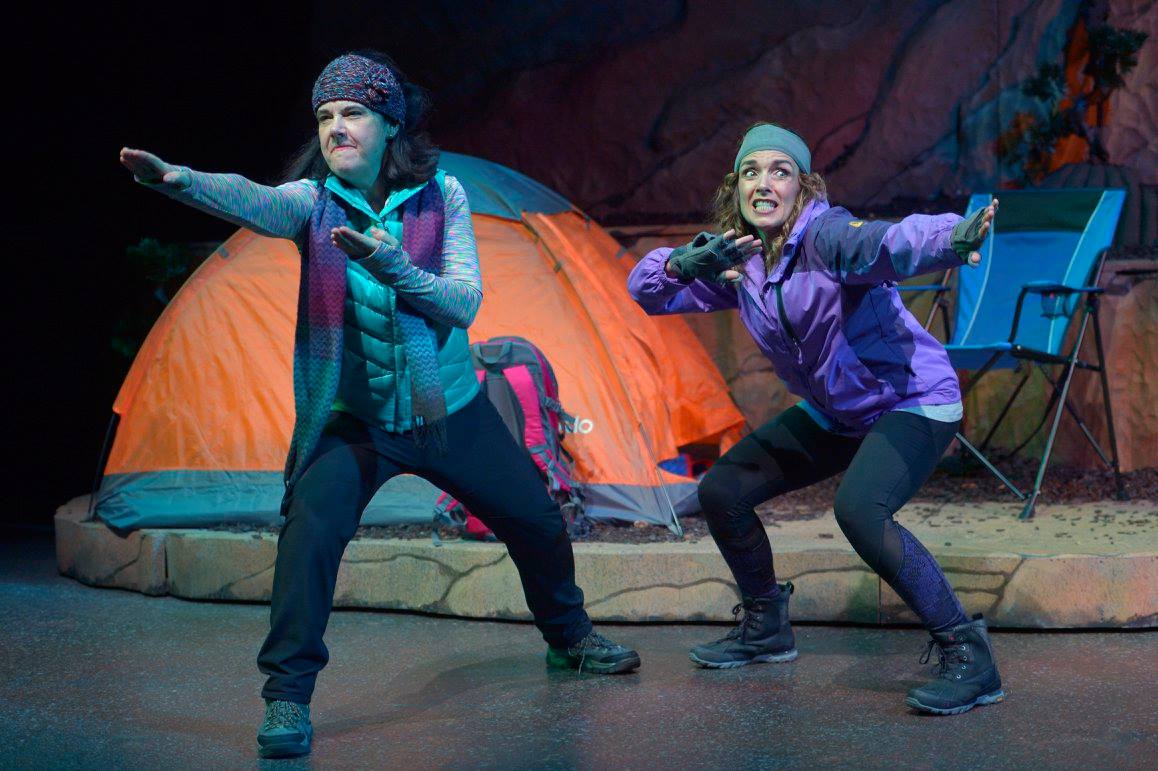 Wendy McLeod’s “Much Ado about Nothing”

If you are a woman, man, or any citizen who feels in jeopardy from the new presidential administration, the escapist farce “Women in Jeopardy!” at Center Rep offers a two hour break from current reality.  Part mystery, part romance, it offers broad laughs while making no demands. The humor is delivered in a tight, fast paced, brightly colored production with fine performances all round.

Wendy McLeod’s comedy, which premiered in 2015, focuses on three divorcees of a certain age in modern day Salt Lake City. The women may not really be in any real jeopardy, unless, of course, the new boyfriend of one really is a serial killer.

Liz (Elisabeth Nunziato), a bit of a drama queen, is gaga over her new love Jackson, and unexpectedly brings him to meet her two old friends: the practical, helpful librarian Mary (Lynda DiVito) and the cynical, sensible-shoed publicist Jo (Jamie Jones). We meet upbeat Mary and dour Jo in Mary’s kitchen, where they have slipped away to discuss what they know of Jackson, a dentist no less. Liz joins them and begins excitedly sharing too much information about her sexual re-awakening. Love-struck Liz also explains that Jackson is off-balance because he has just been questioned by the police. He is the last person known to have seen his dental assistant alive: she has disappeared.

When Jackson (Jason Kuykendall) enters, we are treated to his appalling jokes, his vulgar flirting, and his non-existent social graces. Everything about this man is creepy! He is so deliciously creepy you find it hard to take your eyes off him. Pretty soon Mary and Jo are convinced they need to intervene to save Liz from this serial killer, or at least stop her from sending her teenaged daughter on a weekend camping trip alone with him. Liz is too blindly self-absorbed to see any cause for concern.

This is a true farce—the local police sergeant just happens to look exactly like Jackson, someone gets shoved into a pantry to hide when there is a knock at the door, and one character is forever and wrongly convinced another is deeply attracted to him.

Two younger characters round out the cast: Liz’s teen-aged daughter Amanda (Sarah Brazier) and her sometime boyfriend Trenner (Eric Carlson). Based on my eavesdropping at intermission, anyone who raised a teen age daughter will recognize the over-dramatizing Amanda. Her boyfriend Trenner is sweet but not the brightest porch light on the block.  Their ups and downs are silly, but come across as charming. Brazier and Carlson put their hearts into their roles, making us care about typical teenagers.

Liz and Mary and Jo represent modern day, middle-class everywomen for whom age has made it very, very hard to find appropriate sexual partners. The teenage couple embody new love finding its confused way.  The laughs come less from the action than the one liners and repartee.  And there are great ones that strike hard and true: “Women don’t kill strangers, they kill husbands.” (That has to be the title of someone’s master’s thesis in sociology.)  When Trenner plaintively howls at Amanda: “When all we want to do is love you, why do you make us hate you so much?”  we want to laugh and cry at the same time.

In addition to Mary’s Salt Lake City kitchen, we visit a police station, a ski shop and a mountain campsite. While the sets are changing in blackouts behind them, the actors manically dance and sing to pop tunes. My seatmate assured me that anyone who does Zumba will be familiar with all the songs. At the first dance sequence I was taken aback, but before long I was looking forward to enjoying each crazy arrangement. All the actors do a credible job dancing to Jennifer Perry’s choreography—Sarah Brazier stands out. Set Designer Richard Olmsted creates colorful, modern settings and Costume Designer Bethany Deal captures mountain west casual expertly.

Playwright McLeod tells a story familiar to “women of a certain age.” We all can recall, with a wince, a gushing infatuation in our past.  All of us can remember having to bite our tongues when a friend begins a love affair that we can see is doomed.  We will never forget that first compliment with the addition: “for your age.”

Three meaty roles for women over 40 in one play soothes the jeopardy. The audience had a fine time; we all had plenty of laughs. Director Michael Butler gets high points for the precise and finely tuned timing of this busy farce. Take a break from the news. Enjoy an evening of silliness and laughs with friends.