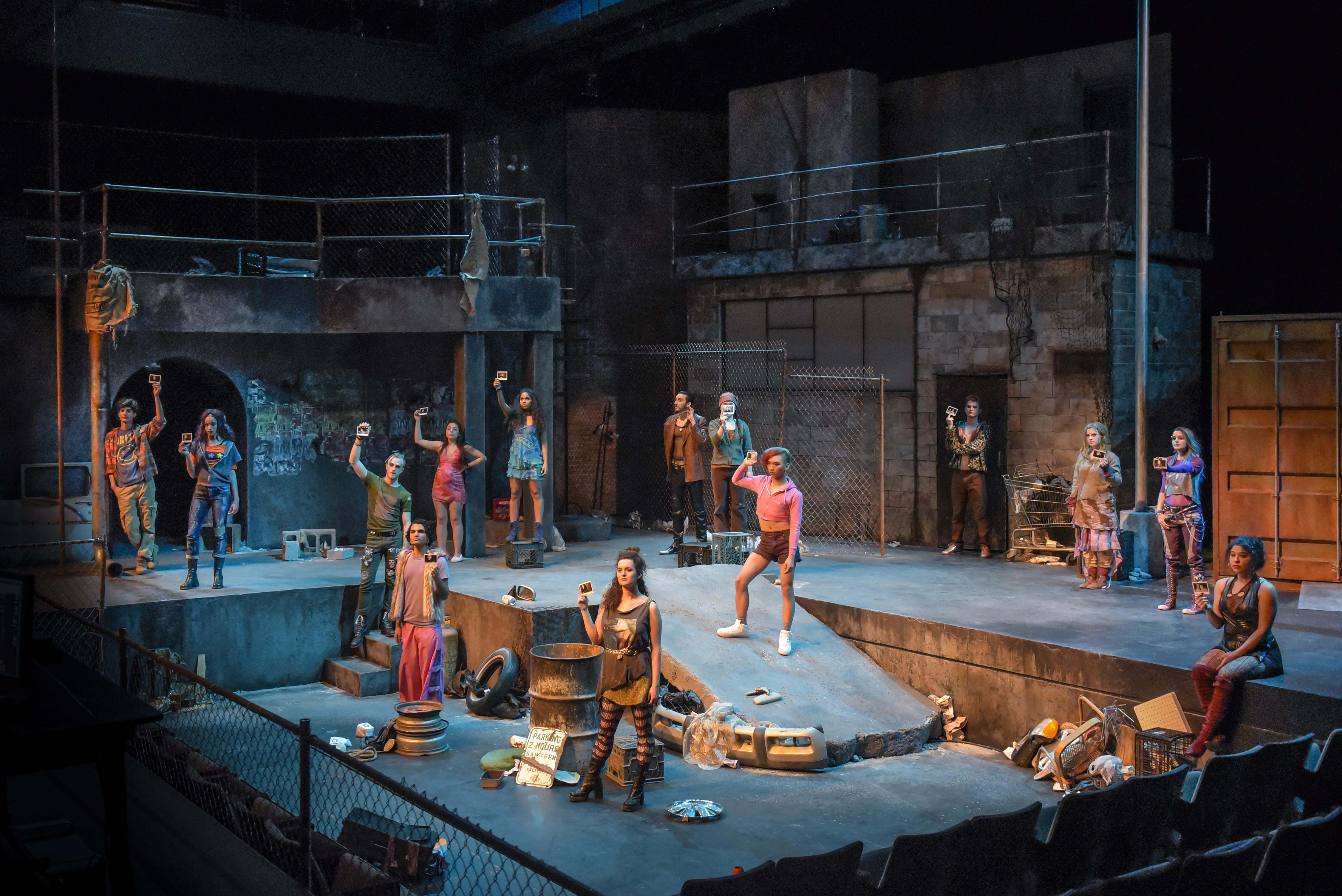 Some youths are at risk, others passed that threshold before birth. We may not know their names, but we will certainly know their tales. “Polaroid Stories,” written by Naomi Iizuka and directed by Margo Hall, tells the stories of street kids who turn to myth-making to survive their harsh reality. In “Polaroid Stories,” staged by TDPS at CAL’s Zellerbach Playhouse, the street kids embody ancient Greek gods and myths, like Eurydice, Orestes, and Semele. But they are trapped in the most degrading street hovels, still declaring they are gods.

The characters in “Polaroid Stories” are inspired by interviews that playwright Iizuka conducted with young prostitutes and street youth. If only Americans would bother to look, zoom in, they would see poverty, sex trafficking, and drugs haunting our Bay Area ‘hoods.’ That may feel like old news, because it is! In 2017, our scattered street kids still need help: that’s no myth. Maybe people will pay attention if the god of wine and theatre, Dionysus, needs our help or perhaps even Zeus, the king of the gods?

Iizuka sets “Polaroid Stories”in a mythological Underworld that looks like our very real slums, in Oakland, Richmond or San Francisco. The brilliant, realistic, ruined concrete set holds three levels of destruction. On Level One the homeless bottom feeders lurk, hiding in holes and corners. Levels Two and Three are the two storied, cold, gray cement buildings, creviced with cracked plaster. These are hovels of despair, worthy of Hades or Lear’s Heath.

On one end of the set, the lights pick out a hidden room for seduction, a false paradise for the kids who live on the streets, with cool colors that highlight the darkness. On the other end, fires flash from Hades, fencing the characters behind wire fences, keeping them apart.

Izuku’s “Polaroid Stories” presents Tartarus as a haven for drugs and desperate love. Narcissus (the princely Akash Patel) and Echo (the humble Jessica Li-Jo) are woven through a series of peoms and monologues. Neon pink and flashy, Narcissus shuns his only hope of real connection with his lost girlfriend, Echo.

Narcissus, the conceited son of a nymph, leaves behind a string of broken hearts. As he stares longingly into his own reflection of bouncy ringlets around a boyishly handsome face, he faces grief from unrequited loves. Narcissus delivers sassy rants, excuses for his douchiness, as he denies his grief.

Main characters are highlighted by their bright colored hair and costumes, set against the gray, run down, cement tenements. Persephone (the savvy Jordan Don) is queen of the underworld and queen of the streets wears delicious cherry-colored knee-high boots with matching cherry underwear over fishnet tights. Classic. Jordan Don’s Persephone delivers horror, sorrow, and anger while allowing a regal denial of the truth. Don’s no nonsense streetwalker dominates the Underworld with wisdom and poise. Her lyrical monologue provokes tears and awe when she reluctantly reveals her story.

In this mythological mashup, some characters have only the name given to them by streets. Nameless and misguided Skinhead Boy (the edgy Baela Tinsley) exemplifies the forgotten identities of at risk youth. Too hooked on drugs to manifest his own godliness, he adopts the name given to him by the unforgiving streets. He races through life depending on speed. Skinhead Boy delights us with his fast paced monologues as he loops his body across the second story of the set.

“Polaroid Stories” has hit the stage in Director Margo Hall’s fast-paced production at CAL, in the Zellerbach Playhouse, by Theater, Dance, and Performance Studies (TDPS). Iizuka is showing that the most outcast among us are gods who can save us. If only we will reach out to the street people, and treat them as the people and gods they are!