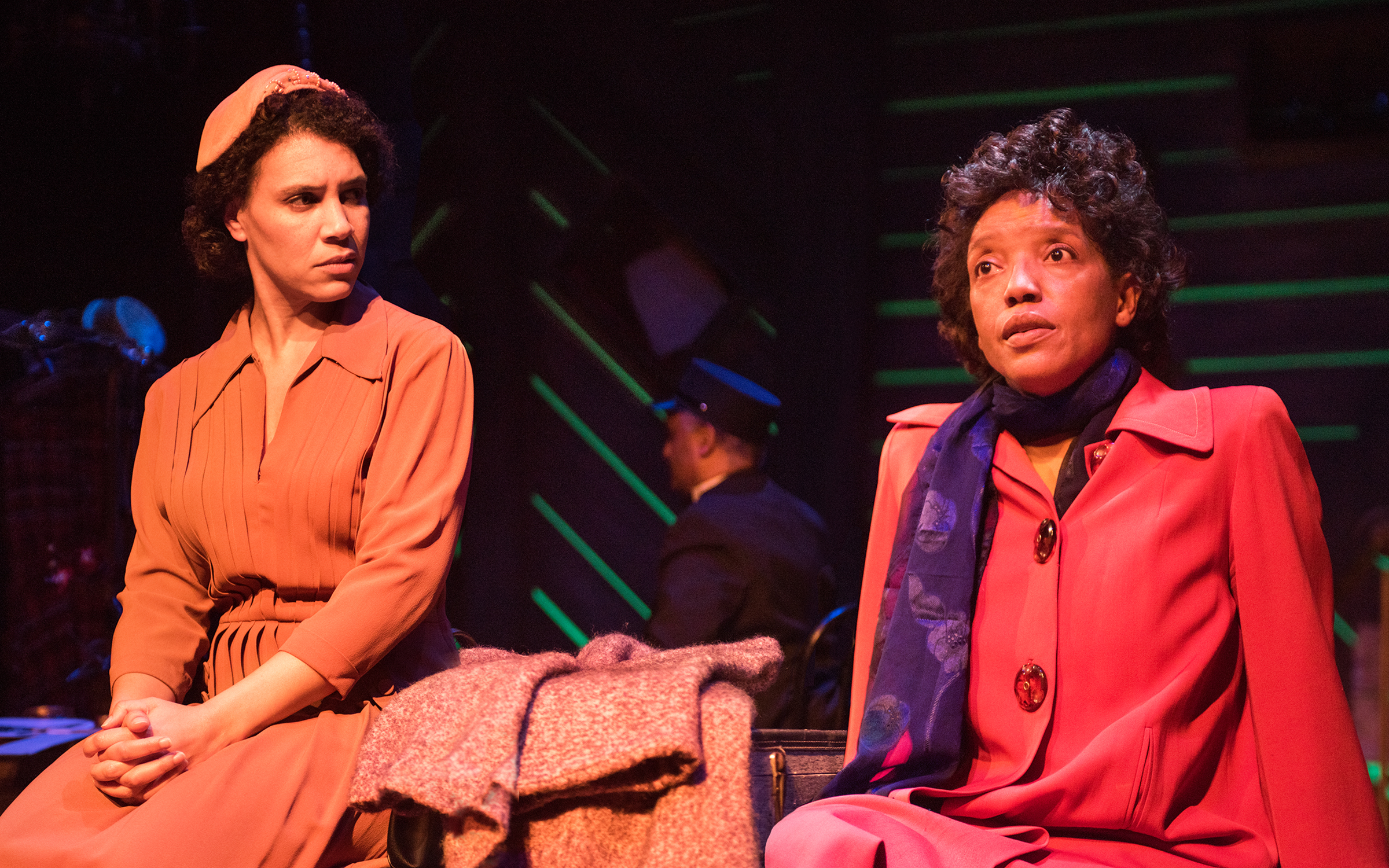 Playwright Jewelle Gomez and Director Arturo Catricala bring home a painful truth in the brand new play “Leaving the Blues.” We know bigotry hurts the victim and corrupts the oppressor. We prefer to forget that bigotry also compels the persecuted to betray one another to survive.   Internationally renowned 1920s Blues singer and song-writer Alberta Hunter had the backbone to face Jim Crow laws, homophobia, and misogyny over her long career. But even the strongest woman, battling all that hate, risks denying her heartfelt love. Alberta Hunter spent a lot of time hiding her sexuality.

A Blues star from the 1920s to the 50s, Alberta left her career behind, when taste in music changed; instead, she became a nurse. Decades later, when the hospital forced her to retire at what her boss thought she was 70, she was really 81. She returned to music and became a surprise success again, in 1977. Alberta Hunter was a tough and talented lady.

Alberta Hunter (a noble Desiree Rogers) dresses down her agent when he fails to find her a bed in the racist South. But she warms up to counsel and help younger musicians, like Cal and Calvino, her gay buddies, and May, a young singer, on tour.

Rogers presents Hunter’s philosophy: ”I’m having a good time living my life today because tomorrow I may die…and I ain’t passin’ nothin’ by!” Rogers’ expressive eyes sell us on Alberta’s life and loves:  from her mother’s accusing her of being “too dark” to the joy with her lover, Lettie. When she sings Hunter’s Blues, Rogers captures the slow rhythm and fun of her “comeback” style. Scrumbly Koldewyn ably handles the Music Direction, while Toshi Reagon created the original music for “Lettie’s Blues.”

Playwright Gomez schools us on Alberta’s daring and heart, which she uses to help her fellow musicians, who travelled with her in the South and abroad, in France. In one poignant moment, a man kisses his male lover tenderly while bracing his arm against the door so no one can enter to catch them. We listen to the fear in lesbian voices discussing the prison sentences given Black women for same-sex activity. From her dressing room, we hang out with Black singers on tour, as they try to find a room and avoid the Klan after dark.

Breathe easy, it’s not all doom and gloom. There’s plenty of humor and song and dance.

We fall in love with the exuberant gay Calabash Cousins, lively tap-dancers Cal (confident Anthony Rollins-Mullens) and Calvino (earnest Paul Collins). Right at the start, they tap dance terrifically across the stage, linked together like a train: a great old-fashioned bit. Choreographer Jayne Zaban clearly knows a thing or two about the railroad. Whether on stage, dancing, flirting, or planning how to get out of town before dark, Cal and Calvino bring the life and fun.

Lettie (a stylish Leontyne Mbele-Mbong) accompanies Alberta on her tour in Paris, but she expresses her independence and stands up to Alberta. Younger than Alberta and from a more secure and comfortable class, Lettie demands recognition: She wants them to get OUT of the closet. She wants to express her love for Alberta, openly. Mbele-Mbong makes it clear why Alberta is captivated with Lettie, her elegant and bold lover.

An energetic singing and dancing ghost named Will (the whirlwind Michael Gene Sullivan) haunts Alberta, serving as both conductor and goad as she considers her “comeback.” Will represents Bert Williams the famous Black comedian of the minstrel era, at one point morphing into the Ink Williams who cheated Alberta out of royalties.  Even though he was a brilliant comedian, Bert Williams was forced to perform for a time in blackface.  Watching Williams perform here in the shuck and jive style is startling and painful, though effective.

Jasmine Milan Willliams plays both May, a young singer looking to Alberta for advice, and Blanche, a rival singer, apparently based on Blanche Calloway. Williams’ May is innocent and eager. Her Blanche— I mean this in the best possible way—is an exquisite bitch.

Beebe (the cocksure Tai Rockett) offers help and sympathy, as a sweet and youthful friend in the theater. This neighbor’s youthful confidence and admiration prop up the aging Alberta. The cool and easy manner always cheers us up.

Will the Ghost’s double-sided hand-fan cleverly captures the changes of the Civil Rights Movement. Watch that move for a subtle but powerful touch. “Leaving the Blues” covers some hateful events in our history. Clearly, the hard-working and inspired cast enjoys working together, making Jewelle Gomez’s play a gay Blues party, celebrating past and present.

Ah, if only the world were as willing as Alberta Hunter was able.

Note: Every Thursday at 7:00 PM, in the NCTC lobby, audiences can enjoy a live-music pre-show by Mr. Tipple’s Musicians, from Mr. Tipple’s Recording Studio, the local jazz bar located in Hayes Valley/Civic Center.