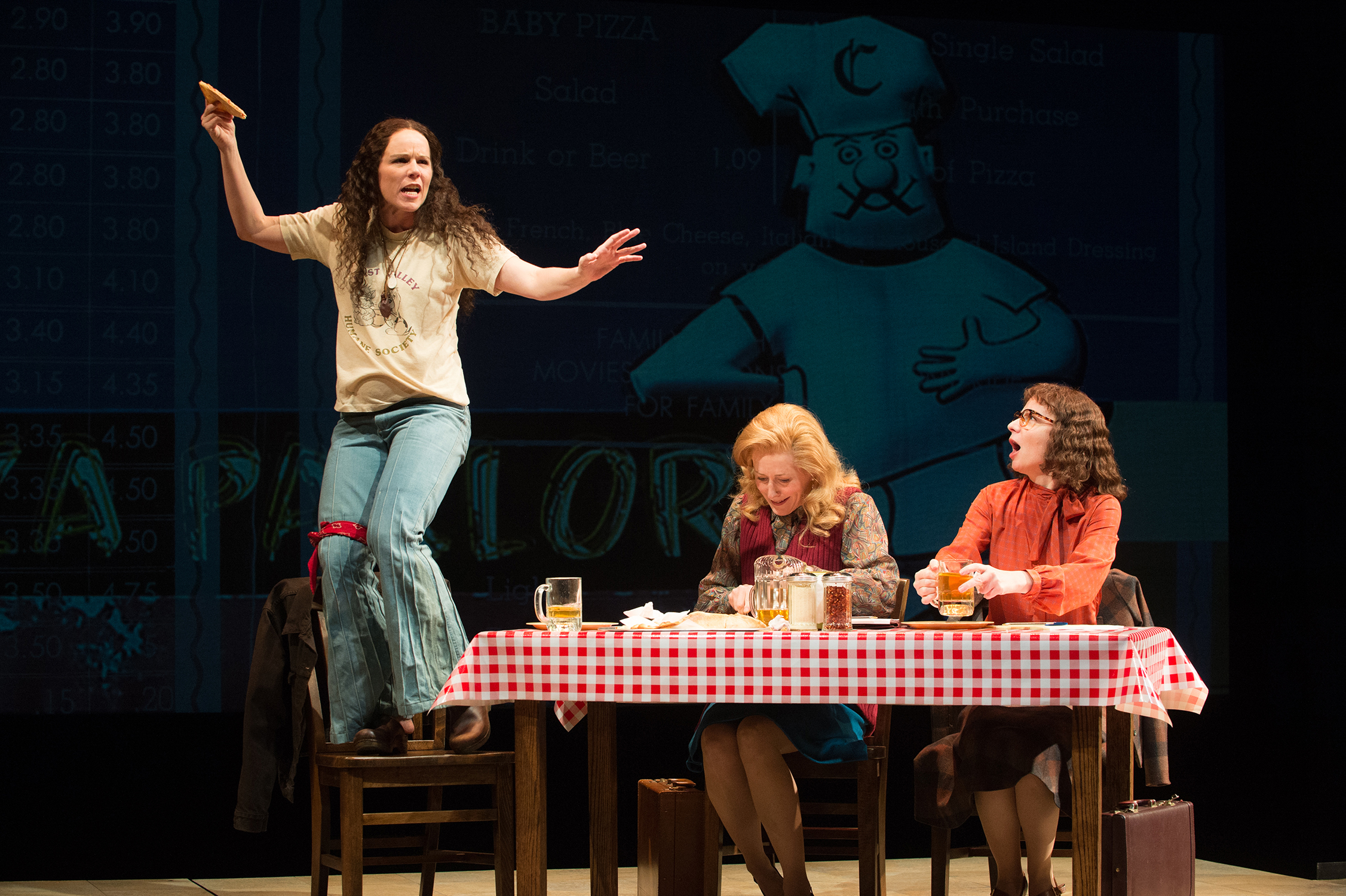 Lisa Loomer’s “Roe” at Berkeley Repertory Theatre tells the story of the landmark Supreme Court abortion case Roe versus Wade (1973) and the women who fought for it. The play draws us into the tension of competing narratives: the story as told by polished lawyer Sarah Weddington (Sarah Jane Agnew) who, along with Linda Coffee (a convincingly eccentric Susan Lynskey), argued the case; and the life and opinions of spunky Norma McCorvey (Sara Bruner), the pregnant and feisty “Roe,” who claims the lawyers deceived her into pressing the case.

Norma’s story begins in a lesbian bar in small town Texas. As a waitress at the Red Devil Lounge, she by turns scandalizes and seduces her colleagues, who tell her that she is “going to hell on a scholarship” as penance for her antics. In a 2013 article in Vanity Fair, Joshua Prager recounts a story from Norma’s co-worker at the time: “Norma would bring two outfits to work: a dress and jeans, so that she could wear the jeans if the customer were girly, the dress if she was a cute butch.”

While it did not make it into Lisa Loomer’s script, this anecdote encapsulates Norma’s shape-shifting personality and the shifting gender norms of the time. Spanning 50 years of cultural change—from the late ‘60s to the present—“Roe” presents a multitude of perspectives not just on abortion but also on women’s roles and social class inequalities. Once the small town Texas girl becomes famous as “Roe,” long after she has had to give her baby away, we see the ways she uses and is used by the lawyers, the news, prominent feminists, and talk show hosts. She continues to wear jeans for some, and dresses for others.

Sarah Weddington’s story begins at a Women’s Consciousness Raising group in which the members devote their time to both afternoon tea and the search for their own elusive cervixes. We are introduced to Weddington’s legal ambitions as she delivers an impromptu speech on the need for universal abortion access. She describes bloody, tortured deaths and “entire hospital wings for botched abortions.” While Weddington expounds, Roxanne (Kenya Alexander), the Consciousness Raising group’s lone woman of color, attempts to educate her about racial inequity. She manages only a few interjections. We learn that while Weddington wants to do the right thing, she is willing to railroad a few people to get it done.

Director Bill Rauch knows how to engage an audience. As the play progresses, the audience becomes increasingly agitated; on opening night a woman yelled an “Amen!” after Norma calls an evangalist a “Dumbass Christian cunt.” Like “Hand to God,” also playing at Berkeley Rep and also set in Texas, “Roe” would surely not play so well in the Texan towns where most of its action takes place. And like “Hand to God,” the playwright has mostly succeeded in portraying people with funny human foibles instead of caricatured Southern hicks.

Loomer edges close to stereotype in her portrayals of drug and alcohol abuse. She presents Norma’s mother Molly (Pamela Dunlap) as a ridiculous, messy, mean, perpetual drunkard. Like a Disney villain, she has no saving grace. We fear her and we laugh at her misery. In contrast, when Loomer’s well-known public figures wryly introduce themselves by way of their actual obituaries or their Wikipedia entries, we share their annoyance. These woefully inadequate obits feel delightfully, hysterically wrong. Like the characters on the stage, there is nothing we can do about it.

“Roe” has an extra challenge: How to present Norma McCorvey as self-serving and irresponsible without defaulting to anti-choice stereotypes of abortion-seeking women as, well, self-serving and irresponsible. Norma becomes a multi-dimensional character when she recounts the loss of her three children (all forced adoptions, the Supreme Court case having taken years to resolve). In these subplots, her wellings of emotion feel authentic, her rancor appropriate.

But I am wary of using a woman’s maternity (whether thwarted or fulfilled) to feel compassion for her. Throughout the play, anti-choice activists do precisely that. To them, motherhood will provide redemption. The Anti-Choicers denigrate and pity women who choose not to reproduce, including Norma and her decades-long partner Connie. Am I, in caring for Norma only when she shows her grief at losing her children, doing anything different?

Scene designer Rachel Hauk’s simple wooden stage set features a series of interlocking, sliding floors that move silently to bring actors forward to us and then back. Wendall K. Harrington’s stage-wide projections of palm trees, convenience stores, and government buildings transport us around the country swiftly and effectively. Hauk also makes use of historical photographs, including those of women whose names have long since been lost. We see them marching, holding placards with mottoes like: “Don’t Rock the Cradle, Rock the Boat!” Like this rumbling and tender play, the placards feel both sweetly antiquated and terrifyingly relevant. Svea Vikander is a Swedish-Canadian radio producer and mental health professional. She lives in Berkeley with her husband and two small children. You can follow her on Twitter and Instagram.