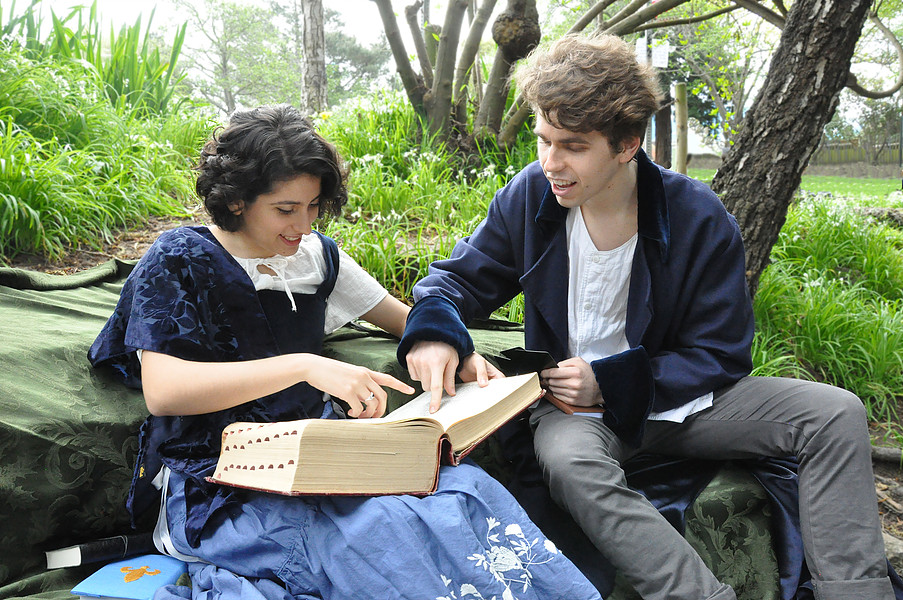 Alandra Hileman Casts off Our Expectations

Finally, some theater for fantasy nerds! Quantum Dragon Theatre presents “Spell Eternity” by Alandra Hileman at The Mojo Theatre in San Francisco. “Spell Eternity” has everything we want in an epic tale: sword fights, first loves, monsters, and a nosy hermit who speaks in riddles (the playful Karl Shackne). We jitter with anticipation as the familiar dynamics of a modern medieval fantasy story unfold.

“Spell Eternity” takes place in a fantastical realm of magic and monarchs. Best friends Gerda (the intense Marisa Darabi) and Kai (the charming Max Siejas) attend the University of Casting Arts.  Kai’s skills in the arts of magic rival Gerda’s scholarly curiosity and theory. But the University faculty cannot see past Gerda’s ineptitude in casting magic spells. While Kai gets accepted for advanced studies, Gerda gets the boot from school because they claim she lacks the magic touch.

Eerily, Kai disappears from school and Gerda begins a quest for her best friend.  Purple and grey painted boxes and stage make up the set. Along with the actors, we imagine the settings, as they trek through forests and get lost in dungeons. We see them shiver as the wind howls, as our heroines squint their eyes to block its rays.

Ocean noises resound as they find love on the beach. Director brilliantly Sam Tillis uses our past fantasies and sci fi trips to immerse us in our own imagined settings. In Act One, Gerda meets Princess Torva (the loyal Lisa Darter) and Clan Chief Liv (the colorful Kitty Torres), creating her quest team. The all-woman team irritates the evil Marzanna (the glittering Genevieve Purdue), unleashing a dangerous enemy. Time is running out on an ancient curse that will end Time, itself. The clock is ticking now.

The University of Casting Arts tells Gerda she is not good enough because she lacks the standard kind of magic.  She learns that true power does not come from entertaining the status quo. True power comes from inside: all it takes is confidence and some help from friends to unleash it. Illusions are under our noses all the time, illusions about what and who is important in U.S. life. We see power dressed in blue, we see power with red neckties and podiums, we see power in big buildings along busy streets. “Spell Eternity” defines power in a new way.  Let us use our individual specialized powers for good, because we can.