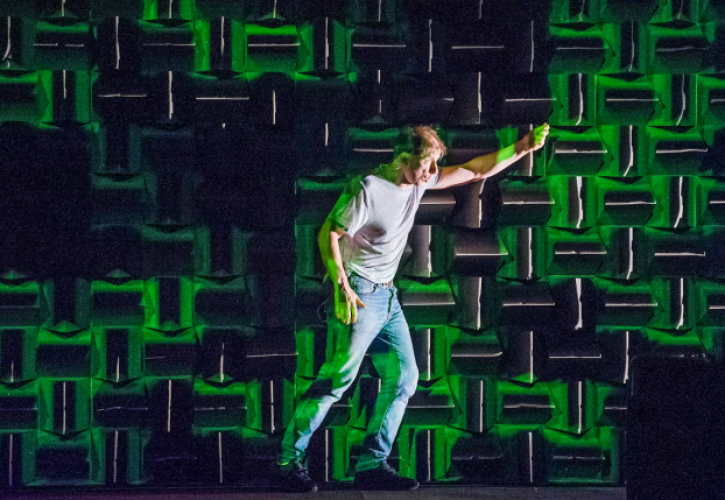 We see a man standing on stage in front of us, but through our headphones we actually hear him standing behind us, then to our right, and then to our left. Simon McBurney, still standing onstage, now tells us that he will blow in our right ears and we will feel his warm breath—and we do. We cannot call it illusion since he appears openly before us and explains his manipulations as he performs them.

McBurney takes us on a sound voyage to the initial encounter between the elusive Mayoruna people of the Brazilian Amazon and the National Geographic explorer and photographer Loren McIntyre. McBurney bases his re-enactment on Petru Popescu’s book about McIntyre’s journey, Amazon Beaming. He has worked for years on this solo performance with producers from Complicite.

McIntyre was lost in the jungle when he encountered the secretive, isolated Mayoruna. His tale is pure adventure, including a gripping story of competing hexes between the explorer and the tribe’s Shaman. The longer the explorer stays with the indigenous people, the more McBurney turns from adventure to exploring consciousness, time, and language. He raises challenging questions, which soon slip into the realm of psychic beliefs.

McBurney portrays the explorer lost in the Amazon in 1969, and himself three years ago, developing “The Encounter.” McIntyre wanders in the rain forest, spending two months among the indigenous people, who are themselves forced to flee deep into the Amazonian rain forest. They undergo violent clashes with Western rubber harvesters who are deforesting the Amazon.

The Mayoruna is an “uncontacted” group of nomadic hunter-gatherers, with their own unique way of life developed over thousands of years and utterly alien to Westerners. McBurney tells the story of this encounter with flashbacks to working on the piece, at home in London while babysitting his small daughter.

Although McBurney is one man show, he co-stars with a sonic gizmo called a “binaural head,” which produces 3-D sound. 3-D sound turns out to be far more impressive than those disappointing 3-D glasses at the movies. This beguiling sound device embeds us in the rain forest or a home office according to the magic that McBurney works in front of the sound wall. He orchestrates his voice, prerecorded sounds, and plastic water bottles. With only lights on the wall, a myriad of intriguing sounds, and a handful of props, McBurney as McIntyre gets us wonderfully lost the Amazon.

“The Encounter” is a dramatized narration of an adventure story, combined with a sonic science demonstration, seasoned with political appeals and philosophical questions. Imagine being a headphone-wearing member of the live audience of a radio play with super charged-sound effects and powerful ideas. McBurney’s notion that our inner world determines how we treat the outer world, could not be more timely, considering the state of the world. He shows us how rubber and plastic garbage are damaging forest and ocean. He reminds us of dire threats to the survival of the few remaining “uncontacted” tribes in the Amazon. We know about these threats, which we lament and allow. These new sonic alarms from the front line are needed and welcome.

McBurney is impressive in his engineering, energetic in his performance, and convincing in his portrayals. The impressive variety of sounds comes from Designer Gareth Fry, assisted by Pete Makin. Fry has worked on this production from its inception, including travel to the Amazon to record sounds, on site.

“The Encounter” is distinctive, provides an intriguing look at communication, and has no dull minutes. Give it a listen.

“The Encounter” directed by Simon McBurney, with Complicite, inspired by Amazon Beaming by Petru Popescu, at the Curran Theatre, through Sunday, May 7, 2017. Info: sfcurran.com