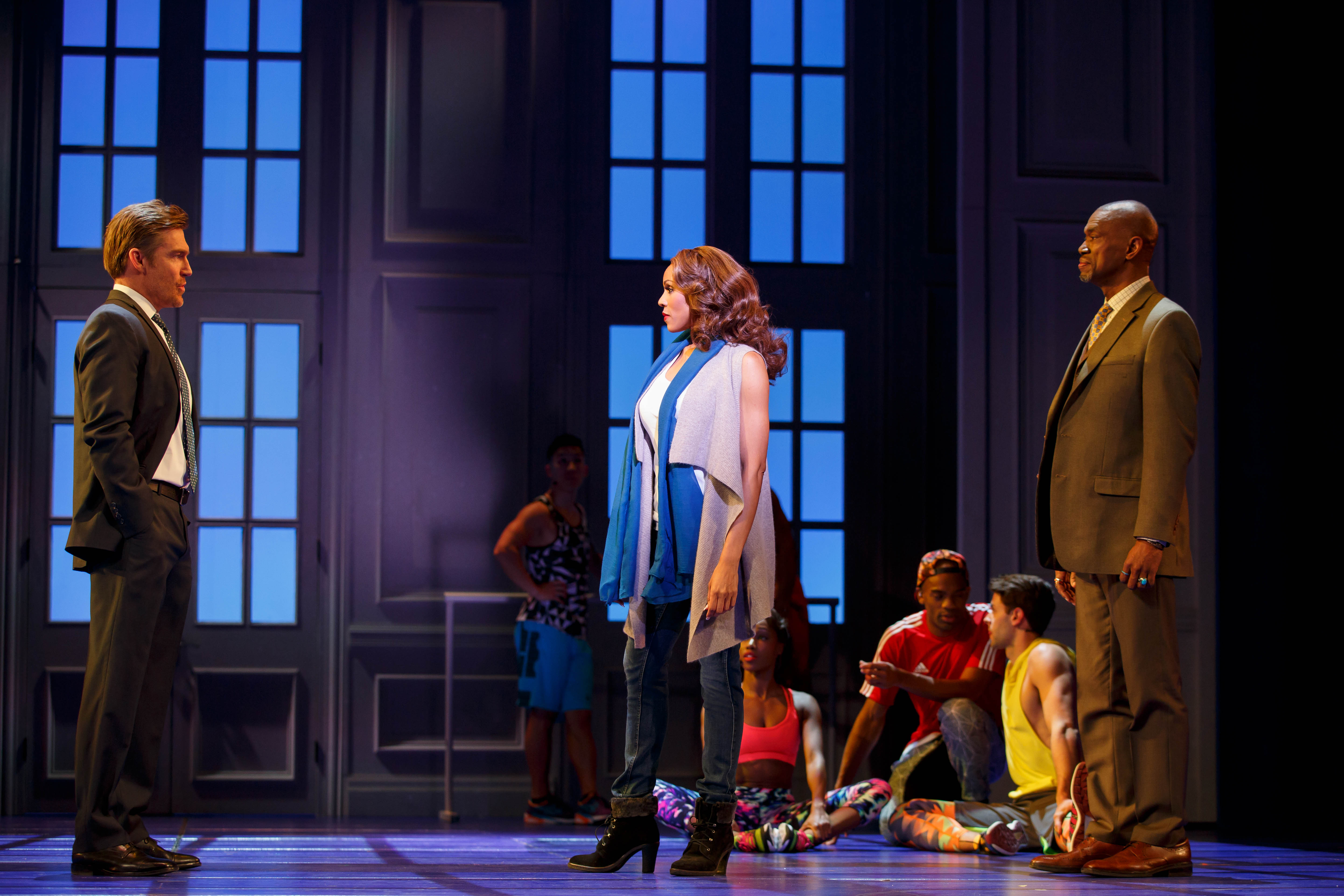 “The Bodyguard” begins with a literal bang that will send your heart straight into your mouth. And then, as your heart settles back to its proper place, it will quickly be won over by Rachel Marron (Deborah Cox), who sings like an angel, a diva, a gift. The audience hangs on every note, whether Cox is going through a whirlwind of choreography while belting out a Whitney Houston classic, or crooning intimately on a loveseat, gazing out into the audience. That voice is captivating, pure ambrosia, and the strength of Cox’s performance more than makes up for a few weaknesses in this adaptation.

“The Bodyguard” is based on the 1992 movie of the same name, starring Whitney Houston as a pop star with a scary stalker, and Kevin Costner as her new bodyguard. While you don’t need to have seen the romantic thriller to appreciate the musical adaptation, those who are familiar with the movie will be impressed by how Alexander Dinelaris keeps all the film’s working parts and then improves upon its empty plot and thin characters.

Rachel Marron is no longer just a stuck-up pop star suffering from egomania. She is an involved and loving mother who invites her son (talented and outgoing Douglas Baldeo) into her dance numbers. She is an emotional, vulnerable woman when no one is watching, a powerhouse with a microphone, and a rash, complicated person when challenged.

Similarly, bodyguard Frank Farmer is no longer a total enigma. While Judson Mills adopts the same deadpan delivery that Costner employs in the movie, Mills’ Frank is three dimensional. In an adorable karaoke bar scene, we see him lose a bet and perform an awkward, charming rendition of “I Will Always Love You.” From this scene on, it is easy to root for Marron and Farmer, as Marron’s stalker creeps steadily closer in calculating, disturbing ways.

Marron’s sister, Nicky, played by the compelling Jasmin Richardson, (who has a sensational voice in her own right) has a more realistic, thought-out relationship with Marron than in the movie. And their relationship unfolds at just the right pace, coming to a climax in a tear-jerking scene that features not only the strongest moment of drama in the show, but an artistic use of the set.

Speaking of the set, it is easy to see why “The Bodyguard” won Best Set Design at the Whatsonstage Awards. From tall, cold, and sophisticated, to warm and cozy, the pieces transform from an elegant mansion, to the Oscars’ stage, to a small cabin in the woods. Along with spectacular lighting and a phenomenal live band, it’s clear we are in the hands of talented professionals.

The impulse to import nostalgia from the movie gets the production into trouble in two main spots. When Farmer rescues Marron from an overzealous crowd at a concert, he flings a man out of the way; and then he lifts her into his arms—freezing in a famous pose from the 1992 film. For a show with a healthy dose of melodrama already built in, we do not need this moment of overkill. Let’s see Farmer struggle, let’s see Marron in a tough spot. Second, the bits of prerecorded video and hologram-type pictures projected behind the actors is distracting and cheesy. Let’s enjoy these characters on stage without a filter, in the flesh. They are worth it.

The show earned a standing ovation during its opening at the San Jose Center for the Performing Arts. In a generous gesture, the cast came flying out from behind the curtains to perform “I Wanna Dance With Somebody,” complete with backflips, lifts, and personality.

Farmer (Mills) shows off his moves during this bonus number that had more than a few audience members clapping, singing and dancing in the aisles—a welcome high note to end on, after a bittersweet closing scene. You could hear a pin drop before Cox launches into what we know is coming in that last number: the chorus of “I Will Always Love You,” made even more emotional because it’s impossible to watch this show without remembering the late, great Whitney Houston. This is as much a love story in her honor as it is Rachel Marron and Frank Farmer’s story.

“The Bodyguard: the Musical” based on Lawrence Kasdan’s 1992 film, adapted by Alexander Dinelaris, directed by Thea Sharrock, at San Jose Center for the Performing Arts, San Jose, California, through Sunday, April 30, 2017.  Info: broadwaysanjose.com