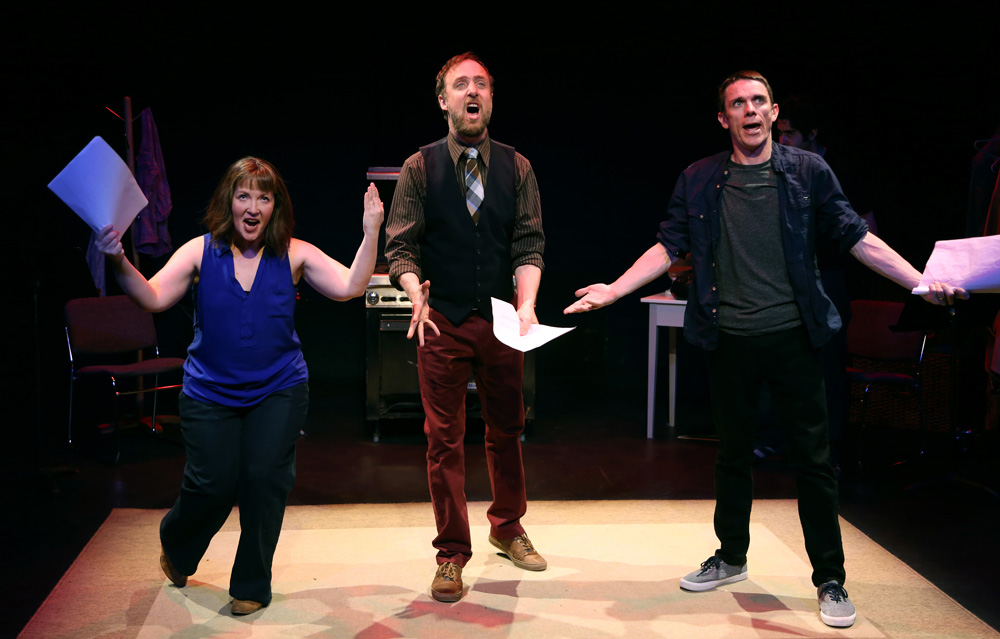 In “Autobiography,” Saïd, the actor, stands up for his people and against cultural appropriation. He exclaims to casting agents that they are ignorant about a culture hundreds of years older than theirs. When Saïd experiences a moment of pride, the Director (Cassidy Brown) sweeps it away. Brown interrupts an absurd melodrama, turning the play from satire towards soulful inquiry.

Trying out for a commercial, Saïd is asked to wear an Aladdin-style turban and dance the hokey pokey to Will Smith’s “Getting Jiggy With It.” His audition scene displays his feelings of shame, as he says, “One’s culture is put on as a showcase.”

“Autobiography,” a dark comedy by Whiting Award-winning playwright and memoirist Saïd Sayrafiezadeh, offers answers to our questions. Playwright Sayrafiezadeh and Director Evren Odcikin offer an artistic twist and delightful timing about patriotism, first considered by the writer in his 2004 essay about 9/11.

We are greeted by a stage simply furnished with a stove and a wardrobe of clothes. Saïd (Damien Seperi) stumbles onstage, beginning with a purposely-awkward monologue that introduces the comedy. Playing the writer, he claims that “Autobiography” is “work in progress,” and  “a collage of scenes.” We begin to realize that we could be the object of this satire.

Saïd is consistently interrupted by queries about his name: “Safiz what??? What does it mean?” Actors Patricia Austin and Alan Coyne (playing themselves) “help” tell his story in a satirical vein—making us feel like we are at a live taping of Saturday Night Live or an Improv Comedy show.

In the playbill, Golden Thread Founding Artistic Director, Torange Yeghiazarian explains, “The story he shares could apply to any immigrant group or segment of society that has felt left out.” Most of us can heartily agree.

“Autobiography” is based on the life of a Jewish Iranian immigrant, who grows up in the U.S., but whose public identity is defined by the 1979 Iran Hostage Crisis. The twists and turns in “Autobiography” keep me on the edge of my seat.

In his superb performance as “Director,” Cassidy Brown delivers wild disruption and chaos. The play, itself, is full of tricks, commenting richly on our social beliefs.

I feel solidarity with Saïd’s daily humiliation—having his name ping-ponged back and forth, never quite landing. We are treated to a startling scene where Saïd auditions for a role, only to be type cast as a foreigner despite being American. The only thing that makes him “look” Iranian is his name.

Though this is not my story, it hit home. I am Indian-born, a first generation immigrant, who moved to the U.S. at the age of two. At some point the pronunciation of my name was changed to a completely different name until I was 15—to make it “easier” for Americans.

I feel solidarity with Saïd’s daily humiliation—having his name ping-ponged back and forth, never quite landing. We are treated to a startling scene where Saïd auditions for a role, only to be typecast as a foreigner despite being American. The only thing that makes him “look” Iranian is his name.

CIA pressure leads Brown to question the integrity of his lead actor and playwright. When Brown pulls out Saïd’s journal, he gives us a taste of the complexity of everyone’s story. We see another side of what happened: As a hopeful young actor, Saïd allows his culture to be humiliated in the service of fitting in and finding work. Amidst my pleasure, I also get an education on the 1979 Iranian Revolution.  In the play, Saïd expresses a young man’s inner anguish. He is torn between his two countries because his father abandoned him as an infant. Although Saïd, an immigrant like any other, wants to fit in, he is “being forced into an identity based on a name.”

We may be prepared for a happy ending, a story of forgiveness and resolution, but the play has another surprise waiting for us.  “Autobiography of a Terrorist” feels like art imitating life—brilliantly.