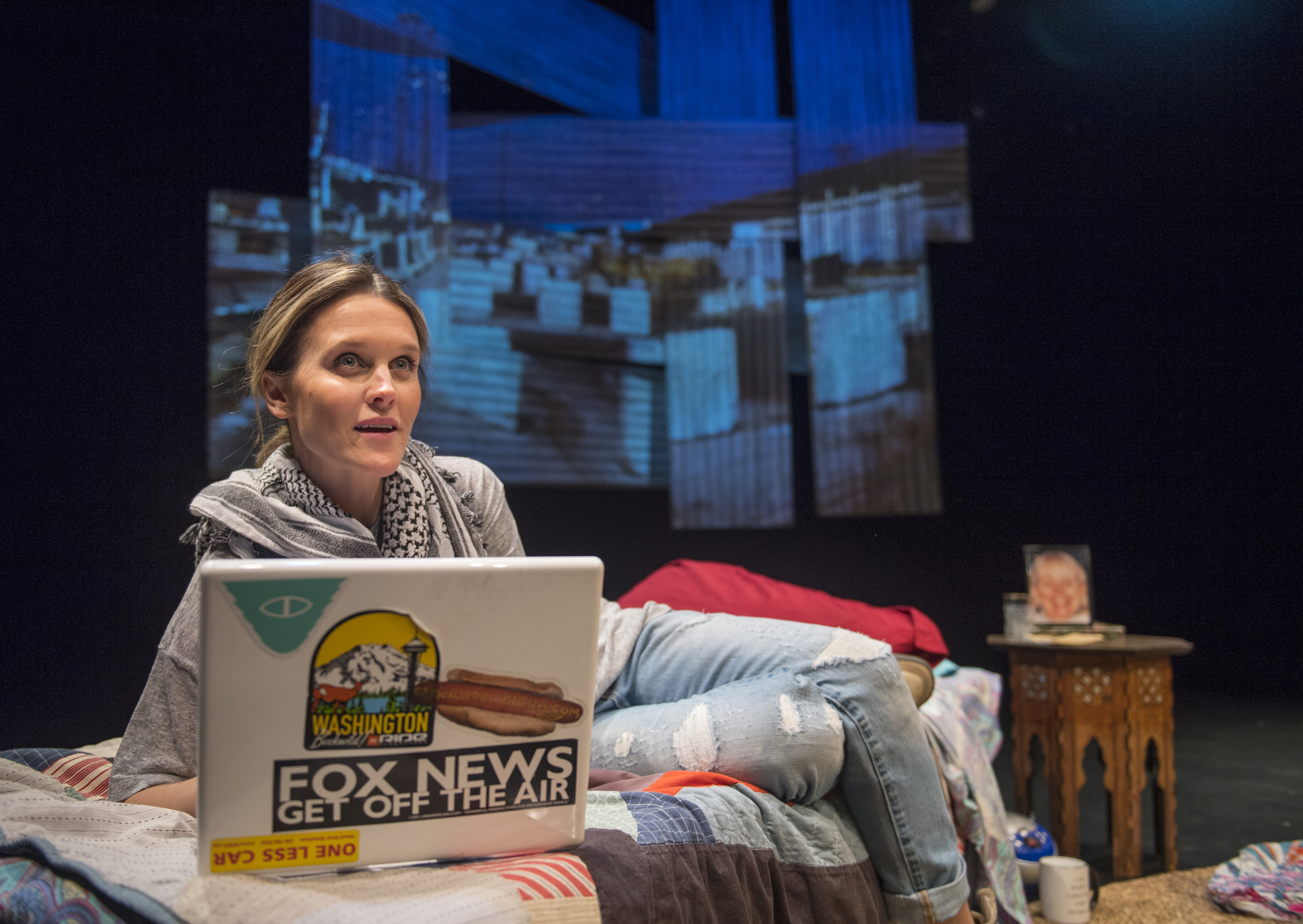 I went to “My Name is Rachel Corrie” by Sawtooth Productions at the Magic Theatre, expecting to hear the words of a strident young woman who took her politics so far that she died for her beliefs.  What I learned is that Rachel Corrie has many dimensions and much poetry in her character. Onstage at Fort Mason, guided by the light touch of Jonathan Kane’s direction, Charlotte Hemmings offers a fresh look at an enigmatic figure, the girl/woman who went from Washington State to The West Bank, making her a symbol for the Palestinian resistance in Israel.

Today, the Israelis have built a wall between the two sides, making travel to and from the Occupied Territories a difficult and humiliating experience. The dilemma for Palestinians has worsened since Rachel Corrie’s death by bulldozer in March 2003. Had Rachel Corrie lived, she would be expressing her outrage over the Israeli sacking of Gaza in 2014, when 2000 people were killed in a few weeks.

Director Jonathan Kane has staged a powerful and graceful piece. His source is the journals and correspondence of Rachel, herself—a collaboration between the late Alan Rickman and Guardian Editor Katharine Viner. They let Corrie’s voice shine through, especially when her situation seems hopeless.

Before we get to the obvious dramatic tension of the war zone, Rachel is preparing to leave for Palestine, packing a rucksack in her messy room. Kane illustrates Corrie’s imminent transition from childhood to maturity. She is leaving her innocence behind, going to the other side of the world. Before she leaps out of safety into danger, we have space to contemplate the wisdom of her choices. Hemmings shows Rachel gathering the disparate pieces of her personality, and taking her bundle to a place of resolution.

Rachel tells us about her home-town of Olympia, Washington,  her parents, her ex-boyfriend. Hemmings shows us Rachel the poet, the dancer, the artist. She plays the jilted lover well, displaying in her movements both certainty and doubt, as she encounters her ex.

Hemmings moves with rapid, seamless transitions from the youthful and naïve girl, towards world-weariness. When she is being playful, she glides around the stage. When serious, she guards her position. She is heading to a war-zone, determined to see justice done.

The set gets more sparse: a woven cloth backdrop features projections of Palestine and Israel. Set designer Linda Hartinian keeps our attention on Rachel and her words. Starkly, Corrie encounters the occupation and demolition of Palestinian homes.

In e-mails to Olympia, she gets support from her mother, but she accuses her father of being a neo-liberal, when he expresses concerns about her voyage to a war-zone. Depending on your age and how much you love free-spirited people, you will either sympathize with Mr. Corrie, or think he’s a drag. When Corrie is reading e-mails from home, Hemmings sits cross-legged, reminding us that she is still a child in her parents’ eyes.

When Corrie is confronted with brutal realities, Hemmings stands firmly in place, resorting to polemic to describe the injustices to Palestinians. While her words express compassion for the plight of the Palestinians, her movements are guarded, tough, and militant.

If Rachel were alive today, she would stay closer to home, traveling to Standing Rock, or supporting Black Lives Matter. After all, you don’t have to go to the Middle East to find people who are dispossessed. This work makes us question our own complacency, and sense of purpose. Younger people will understand her dilemma and her decisions. “My Name Is Rachel Corrie” and Charlotte Hemmings’ superb performance remind us that we are never far from crashing upon the shoals. “My Name is Rachel Corrie” taken from the writings of Rachel Corrie, edited by Alan Rickman and Katharine Viner, directed by Jonathan Kane, by Sawtooth Productions, at Magic Theatre, San Francisco, through Sunday, May 14, 2017.  Info: my-name-is-rachel-corrie

On May 3rd and 4th, there will be post-show talk-backs with Rachel Corrie’s parents, Craig and Cindy Corrie.