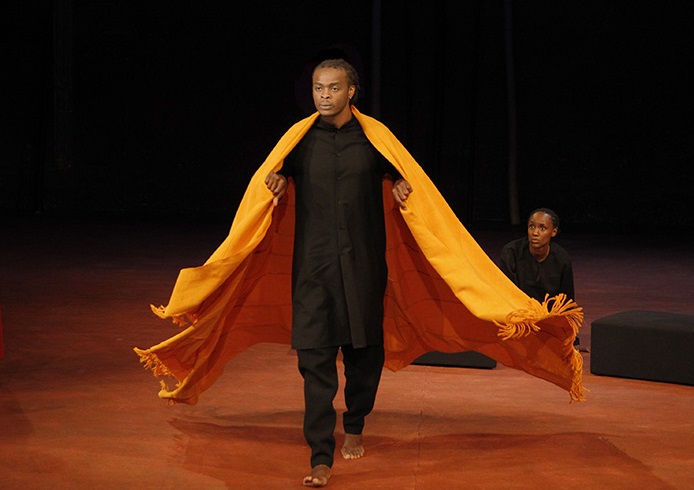 Based on The Mahabharata, an ancient rambling Indian epic, “Battlefield” trims away every extraneous element to present a message of startling clarity and beauty.

Each actor takes on many roles in this feast of stories, pearls on a precious string. Carol Karemera startles with her angular poses and stark beauty; and Jared McNeill makes us think of our common, self-doubting humanity. Sean O’Callaghan embodies the best of serene, classical style; and Ery Nzaramba takes on a marvelous array of ageless seers and prophets, mesmerizing us with his sensitivity and silences. Each is a marvel to watch.

The story unfolds following a great battle between heirs to the throne of Kuru. Victorious, but having just discovered he’s led his legions into battle against his own brother, Yudhishthira (a sprightly Jared McNeill) believes his victory has turned to defeat. Can a man be both victorious and defeated? He turns to his grandfather and a prophet to find the answers.

The new King is bewildered and confused. so he decides to abdicate: “I will retire to the forest and eat fruits and roots and bathe twice a day like an idiot,” he exclaims to his mother Kunti (the elegant Carole Karemera). Because he cannot decide on his own, he seeks advice from his dying grandfather (the hypnotic Ery Nzaramba). Later, he takes advice from a mongoose.

The Mahabharata reveals that Yidhishthira is the son of the God of Duty (Dharma). Sir Peter Brook’s magical re-telling of the story touches on duty as it flows from truth, attachment, and destiny. The versatile actors take on ever-changing roles where they encounter magical beasts and terrible challenges—with the cool balance and noble gestures of a Greek tragedy.

Although the disconnected but powerful vignettes remind us of the “Just So” series by Rudyard Kipling, these have the effect of opening a one-sided conversation with us. It’s as though the actors are saying, “Here are the topics, you, the audience, can think on them, work on them.” Assign an emotion. Determine right from wrong. It’s up to you.

Can a King rule without knowledge? Does a worm have a life worth living? What truths are we duty-bound to seek? “Battlefield” raises contemporary questions in a bare bones style that demands engagement, else we miss the grandeur of life and the wonder of this beautiful, lyrical story.

“Battlefield” Based on The Mahabharata and the play written by Jean-Claude Carriere, adapted and directed by Peter Brook and Marie-Helene Estienne, by A.C.T. San Francisco, through Sunday, May 21, 2017.  Info: act-sf.org