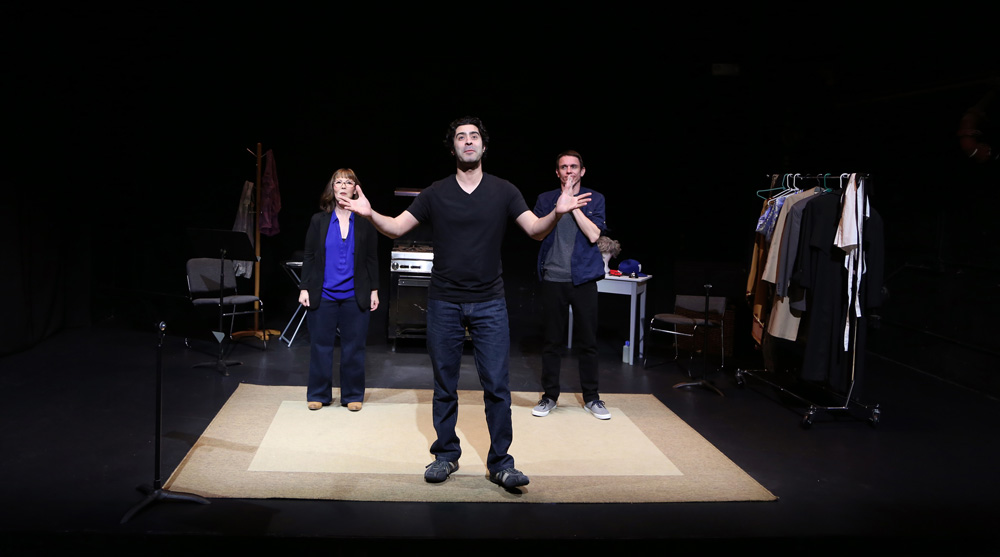 Saïd Sayrafiezadeh Laughs at Himself, and US, Too

My seat mate poked me, snorted and said,”Look at the program. This actor bio has her thanking her sorority sisters, do you believe it?” I had already read the director’s intro about speaking as a “White man” whose “duty” was to allow “those whose voices are silenced…be heard through mine.”  Huh?

But then an actor (Damien Separi) introduces himself as the “playwright,” explaining he will be portraying his experience as an American with a Jewish mother and Iranian father in a “collage of scenes.”  “I’m playing myself playing me,” he informs us. After a lengthy commentary on the social content of the piece, other actors enter, tell some funny, familiar, old jokes about Americans mangling an Iranian name.

Just when I was starting to wonder why I came, things get interesting. Ideas get misunderstood and friction develops between actors. As things grow ever more cockeyed, the Director (Cassidy Brown) steps on stage to help—making things even more hilarious. Sinister political threats loom. The best laid plans bump and veer off, wildly.

All the actors—soul-searching Damien Seperi as Said, commanding, obnoxious Cassidy Brown as the Director, eager Patricia Austin as the Actress, wide-eyed Alan Coyne as the Actor—do stellar work.

“Autobiography of a Terrorist” is self-referential and self-parodying. The actor/playwright engages in continuous self-examination. The fourth wall is breached non-stop. The scenes are parodies of themselves. Characters deceive us. “Autobiography” skewers American patriots, smug liberals, and devoted artists. The play even takes on its producer, Golden Thread Productions.

Plenty of serious issues underlie the deceptions and the jokes, ranging from immigration to bigotry, censorship, to the history of Iranian Revolution. Playwright Saïd Sayrafiezadeh includes the deeply personal—the pressure to compromise our values when outnumbered.

Many of the scenes, deal with the experiences of a ten year old boy with an Iranian last name, living in New York during 9/11.  “Autobiography” was written in 2004, a time when asking, “Why do they hate us?” could get you labelled a “traitor.”

Like “You for Me for You,” previously at Potrero Stage, “Autobiography” provides plenty of laughs, leaving us with plenty to ponder. Both plays present unique and satisfying encounters, and both will profit from a bit of fine tuning.

“Autobiography of a Terrorist” at Potrero Stage is a world premiere of a play written in 2004.  We need more theaters willing to stage interesting, timely stories of the immigrant experience.  We can hope for more on this anger-provoking issue.

All respect to Potrero Stage for giving us two thoughtful, funny plays, with progressive politics and great good humor.